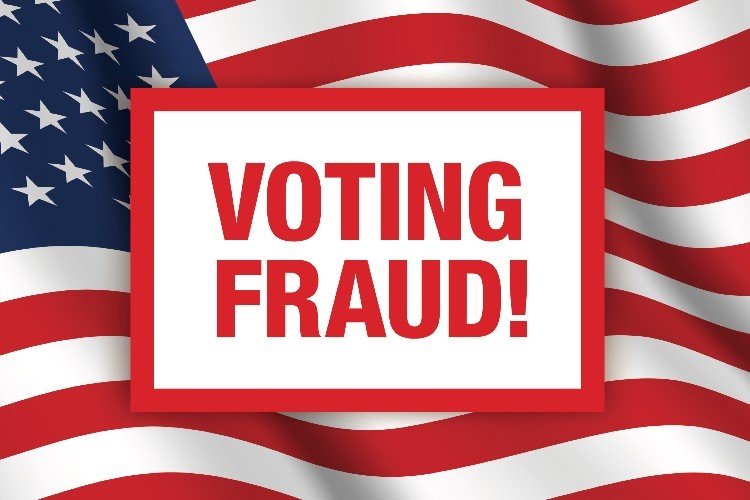 Amid unprecedented voter fraud and even what many analysts have described as an attempted “coup d’etat,” America is in a constitutional crisis of incredible significance. Fortunately, the Constitution provides solutions. President Donald Trump has vowed to keep fighting. Top Republicans from Congress to governors’ mansions have promised to stand with him as investigations, lawsuits, and other efforts to overturn the fraud attempts work their way through the system. All over the nation, patriots furious about the half-baked effort to rig the election and steal the presidency are seeking guidance and leadership. There is much that can be done.

The U.S. Constitution offers many potential remedies, including a trump card. In Article II, Section 1, the Constitution explains: “Each State shall appoint, in such Manner as the Legislature thereof may direct, a Number of Electors.” In other words, just because Democrats and Deep State operatives were able to stuff the ballot boxes or rig the outcome with computer programs, state legislators have a powerful tool at their disposal. Most of the states that are most hotly contested have solidly Republican legislatures, including Arizona, Wisconsin, Michigan, Pennsylvania, and Georgia.

Electors will meet on December 14 this year. And on January 6, votes cast by those electors from the Electoral College will be counted in Congress. Typically, those functions are seen as a mere “formality,” as the outcome of the election is already known. However, this time, it may not be so simple. In fact, a vast coalition of organizations and prominent media personalities including The John Birch Society, Phyllis Schlafly’s Eagles, Fox News host Mark Levin, Florida Governor Ron DeSantis, commentator David Horowitz, and many more are advocating for GOP legislatures to overturn the obvious vote fraud by sending pro-Trump electors.

In an e-mail to GOP legislators in Pennsylvania, prominent attorney Andy Schlafly, a leader with Phyllis Schlafly Eagles and the son of the late conservative legend, urged them to do their duty to save America from vote fraud. “The voting in this presidential election has been tainted beyond repair,” he explained. “Poll watching and transparency were blocked; improper ballot harvesting is evident from the severely imbalanced mail-in results; and the Pennsylvania Supreme Court overstepped its authority by expanding mail-in voting. Those who voted on Election Day in compliance with federal law have been disenfranchised by ballot-box stuffing by mail.”

As such, Schlafly argued, the Pennsylvania legislature “should fulfill its duty under the U.S. Constitution” by appointing electors to honor the legitimate votes cast on election day. “Last year an election board in North Carolina overturned a congressional election won by a Republican, based on an anecdote about ballot harvesting,” he said. “When, as now, an election result is tainted and lacks the confidence of the American people, then the Constitution calls on the state legislature to act. The governor has no role in this.”

“Please step up and do what is best for our country, and honor the votes cast on Election Day rather than disenfranchising them by improperly voted and improperly counted mail-in ballots,” Schlafly concluded. “There needs to be a check-and-balance against election misconduct and the Constitution authorizes the statute legislature for this. As a legislature please select the Electors and end this crisis. Let the other side litigate this issue to the U.S. Supreme Court if they like, which will enforce the Constitution as it was written in favor of your authority. When the Pennsylvania legislature leads on this issue, other states will follow.”

Very high-profile media figures and legal experts have joined the fray too. Fox News personality Mark Levin, the former chief of staff to Attorney General Edwin Meese III during the Reagan administration, is among the prominent voices calling on legislatures to override the fraud. “Reminder to the Republican state legislatures, you have the final say over the choosing of electors, not any board of elections, secretary of state, governor, or even court,” he posted on Facebook as the fraud was becoming clear. “You have the final say — Article II of the federal Constitution. So, get ready to do your constitutional duty.” One of Trump’s sons re-tweeted the message, prompting a meltdown among those pretending Biden is the president-elect already.

Former CEO Arthur Thompson of The John Birch Society, which has had some high-profile disagreements with Levin in recent years, also called on lawmakers to use the Constitution to block the fraud. “What we need to do — what you need to do — is to contact your state representative and senator and point out to them that they have the power to overturn the fraud in their state if they simply will meet and do so,” said Thompson. “It’s their responsibility. They must be made to accept it, and then do something about it. For instance, if the governor, with or without the state courts, changes the means by which the people vote for president, then the legislature must intervene and restore the power where it belongs — in this case, the legislature.”

“If the votes show overwhelming evidence of fraud, then it is the responsibility of the legislature to invalidate the votes cast that have not followed the standard, normal means of voting,” the retired JBS CEO continued. “However, don’t get caught up in the investigations into the fraud. Leave it to Trump and his legal team. For us citizens, this is a dead end. We can’t do anything about it anyway. Instead, focus your energy on contacting your state representative and senator and have them convene and rectify the problem in your state. The results of the recent election can be rectified if the president doesn’t give up, the state legislatures in the questionable states assume their responsibility, the Supreme Court does its duty if the case is brought before them, and you don’t give in.”

Pointing to the U.S. Constitution, former Clinton advisor and master political operative Dick Morris has also been advocating such a move. “We have to move the fight from the executive branch of the states to the legislative branch of the states. In all of these four key states — North Carolina, Pennsylvania, Michigan, and Wisconsin — there are Democratic governors, but both houses of the legislature are Republican. Those guys need to wake up,” Morris told Newsmax host Grant Stinchfield. “And if you live in those states, you need to call your state rep and your state senator and say, get on the ball. Get to the state capitol, demand that the legislature be called into session, and take over the counting process.”

“The U.S. Constitution does not say that the states shall decide the procedure for electoral votes. They say the legislature should decide. Not the governors, the legislature,” added Morris. “And what they should do is step in and say the evidence of missing votes, suddenly discovered votes, unexplained delays, not granting access to poll watchers shows the corruption of this process, and we the state legislature are taking it over. We’re going to set up a joint committee to run this process, and then we the legislature will do what our Constitution charges us to do: determine who won the election and to get the electoral votes of our states. That’s what they should do.”

The strategy has attracted some high-profile backers in elected office, too, including Florida Governor Ron DeSantis. Speaking on Fox News’ The Ingraham Angle with Laura Ingraham, DeSantis urged legislators to use all means at their disposal. And in particular, he called on citizens to lean on their elected officials to ensure the vote fraud is overturned by state legislators.

“Under Article II of the Constitution, presidential electors are done by legislatures and the schemes they create in the framework,” DeSantis said. “If there’s departure from that and they’re not following the law, if they’re ignoring law, then they can provide remedies as well, so I would exhaust every option to make sure we have a fair count.” He called out Pennsylvania and Wisconsin as particularly egregious examples, blasting the “4 a.m. dump of massive votes for one candidate and almost none for the other.”

Already, more than a few lawmakers in key states are working behind the scenes to try to build a coalition that would overturn the fraudulent election results by sending Trump electors to the Electoral College. And the calls and e-mails from Trump supporters urging them to do so are flooding in faster and faster as the word spreads.

In response to an e-mail about it, Pennsylvania State Senator Mario Scavello said, “I agree.” He also included a link to a video he made about the massive fraud in his state. Referring to the controversial secretary of state and state court decisions to change election rules before the vote, Senator Scavello blasted the judicial and executive branches for trying to usurp the legislature’s role in elections. “It’s the best court money can buy,” he said. “But if they want to legislate, don’t do it from the bench, they should run for state senator or run for state representative. And governor, same for you, if you want to legislate, run for legislature…. That’s not your job.”

He also accused the governor — whom he described as a “phony” — of trying to “steal elections.” Noting that Philadelphia sometimes has more votes than registered voters in certain precincts, and that top executive-branch officials called Pennsylvania for Biden even while Trump was 700,000 votes ahead, Scavello suggested something was truly amiss. And he vowed that lawmakers would not let it slide without a response.

In Michigan, lawmakers have taken action, too. The weekend after the election, the legislature even met for a highly unusual Saturday session. At the top of the agenda was a “software glitch” that mysteriously recorded some 6,000 Trump votes as Biden votes in rural Antrim County — a “glitch” that was only discovered when the votes were manually recounted. Similar “glitches” are being discovered in numerous other jurisdictions, giving GOP legislatures plenty of ammunition and cover if they decide to send Trump electors to the Electoral College. Trump pointed massive irregularities in voting machines by Dominion Voting System, too.

While the fake “fact checking” industry has been working overtime in an effort to discredit voter-fraud claims, the self-proclaimed “fact checkers” at USA Today did acknowledge the fact that legislatures will choose electors. “We rate this claim TRUE, based on our research,” wrote Chelsey Cox for the paper in response to claims about legislators being able to save the day despite the fraud. “The Constitution grants state legislators the power to choose electors for the Electoral College. But the electors have the ‘final say’ in the outcome of the presidential election.”

In fact, even recently, in the Bush v. Gore case, the U.S. Supreme Court made clear that state legislatures “can take back the power to appoint electors” at any time. That means regardless of the phony outcome achieved through fraud, the GOP legislatures — without any consent or input from the governor or the courts — could choose to send a slate of Trump delegates to the Electoral College. The Constitution is clear, and virtually every analyst agrees that it would be upheld by the courts if a lawsuit were to be filed.

No matter what happens in the weeks and months ahead, it will be more critical than ever that American patriots be involved at the fight at every level. Other options to get involved: Getting accurate information out, bypassing the dishonest media, supporting criminal investigations, and much more. Liberty and the future of the United States hang in the balance.