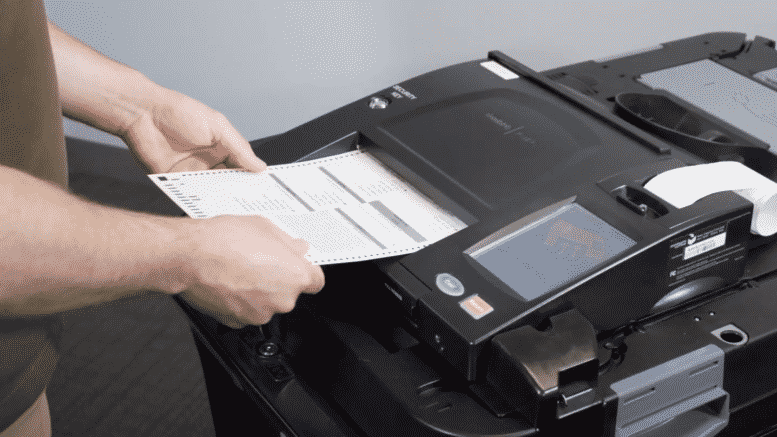 Dishonest scales are an abomination to the LORD, But a just weight is His delight. Proverbs 11:1

Most Americans have no idea that, in the vast majority of states where electronic voting machines are used, final ballot tabulations are not handled by their state and local governments, and haven’t been for years.

In the early 2000s, county and state governments began to farm out the tedious process of tabulating election ballots to private technology companies. It would be faster and more efficient, the tech giants promised.

So they did away with paper ballots and everything went digital.

When sporadic issues cropped up across the country, Americans cried foul and demanded a paper trail. The software companies were happy to oblige.

They responded by allowing the voting machines to spit out what appeared to be a paper “ballot.” This made everyone think they had the ability to scrutinize their ballot choices, making sure the piece of paper they held in their hand showed the correct names of the candidates for whom they voted before running it through a scanner and officially “casting” their ballot.

This whole process has now been exposed as a clever mirage, an act of chicanery by the technology wizards.

That piece of paper you held in your hand was not really a ballot at all.

It was a symbol of the ballot but not a ballot.

Your actual “vote” was a digital blip of data on a hard drive that would get transmitted over the Internet to your state’s election headquarters. Whether your vote for Donald Trump actually made it through that transmission process without being changed to a vote for Joe Biden is now an open question.

“Some of the most popular ballot-marking machines, made by Election Systems & Software and Dominion Voting Systems, register votes in bar codes that the human eye cannot decipher,” according to a February report by Associated Press.

But according to researchers, that’s a problem, as “voters could end up with printouts that accurately spell out the names of the candidates they picked, but, because of a hack, the bar codes do not reflect those choices.”

“Because the bar codes are what’s tabulated, voters would never know that their ballots benefited another candidate.”

Many political analysts and journalists, myself included, warned back in 2003 and 2004, when many states were switching their systems over from actual paper ballots to this new electronic format that this would take us down a dangerous path.

The democratic process is totally dependent on transparency, trust and accountability — three things that private tech firms are not known to possess in large quantities.

Tech firms are notoriously always trying to protect their proprietary codes and algorithms — the inside guts that make their products perform.

So when claims of fraud arise, it’s almost impossible to find where exactly things went wrong. That’s why election officials like to skim over such claims with “oh it was just a glitch, nothing to see here, move along.”

The politicians refused to listen to the cautionary warnings, which were dismissed as “prophets of doom” who just wanted to resist the tide of technological advancement in the modern era. They gleefully turned their election systems over to Big Tech.

Fast forward to 2020 and everyone’s worst nightmare has arrived.

We are seeing the disastrous results of the decisions made 15 to 18 years ago in almost every state. Last Tuesday’s presidential election was fraught with irregularities, and the most difficult ones to get to the bottom of will be those which involved Dominion Voting Systems, used by every one of the key battleground states whose ballot counts are being called into question.

Listen to bombshell interview with Lt. Gen. Thomas McInerney — The Hammer is the Key to the Coup

Evidence in Antrim County, Michigan, where 6,000 votes were switched from Trump to Biden, lead many to believe that this was just the tip of the iceberg in a software system that may have been infiltrated by an outside source, namely the HAMMER Scorecard program [see yesterday’s post, Did American Patriots get HAMMERED by deep-state globalists?].

Elections authorities in Michigan were quick to write off the 6,000 vote switch as a “glitch” caused by “human error.”

“In computer software development lingo, a ‘glitch’ is slang for an unintentional software malfunction. Voting software that switches votes means that it was intentionally programmed to do so,” says Patrick Wood, editor in chief at Technocracy News and Trends.

“This is an extension of Big Tech’s dictatorial stranglehold on censorship of opposing ideas,” Wood adds.

Below is an article from the Center Square, which probes deeper into America’s disturbing history of turning over the most important facet of its democratic process to super-secretive tech giants run by people with shady backgrounds. Pay particular attention to the connections to George Soros and the World Economic Forum, a globalist organization that I have reported on at length over the last year, focusing on its push to completely restructure the world order around socialistic technocracy.

By Bethany Blankely, The Center Square

The Dominion Voting Systems, which has been used in multiple states where fraud has been alleged in the 2020 U.S. Election, was rejected three times by data communications experts from the Texas Secretary of State and Attorney General’s Office for failing to meet basic security standards.

Unlike Texas, other states certified the use of the system, including Pennsylvania, where voter fraud has been alleged on multiple counts this week.

Dominion Voting Systems, a Canadian company headquartered in Denver, is one of three companies primarily used in U.S. elections. The others are Election Systems and Software and Texas based-Hart InterCivic.

The Dominion system was implemented in North Carolina and Nevada, where election results are being challenged, and in Georgia and Michigan, where a “glitch” that occurred reversed thousands of votes for Republican President Donald Trump to Democrat Joe Biden.

While Biden declared victory Saturday in his U.S. presidential race against Trump, the Trump campaign is launching several challenges to vote counts in states across the country, alleging fraud.

Dominion’s Democracy Suite system was chosen for statewide implementation in New Mexico in 2013, the first year it was rejected by the state of Texas.

According to a Penn Wharton study, “The Business of Voting,” Dominion Voting Systems reached approximately 71 million voters in 1,635 jurisdictions in the U.S. in 2016.

Dominion “got into trouble” with several subsidiaries it used over alleged cases of fraud. One subsidiary is Smartmatic, a company “that has played a significant role in the U.S. market over the last decade,” according to a report published by UK-based AccessWire.

Litigation over Smartmatic “glitches” alleges they impacted the 2010 and 2013 mid-term elections in the Philippines, raising questions of cheating and fraud. An independent review of the source codes used in the machines found multiple problems, which concluded, “The software inventory provided by Smartmatic is inadequate, … which brings into question the software credibility,” ABS-CBN reported.

Smartmatic’s chairman is a member of the British House of Lords, Mark Malloch Brown, a former vice-chairman of George Soros’ Investment Funds, former vice-president at the World Bank, lead international partner at Sawyer Miller, a political consulting firm, and former vice-chair of the World Economic Forum who “remains deeply involved in international affairs.” The company’s reported globalist ties have caused members of the media and government officials to raise questions about its involvement in the U.S. electoral process.

In January, U.S. lawmakers expressed concern about foreign involvement through these companies’ creation and oversight of U.S. election equipment. Top executives from the three major companies were grilled by both Democratic and Republican members of the U.S. House Committee on House Administration about the integrity of their systems.

Also in January, election integrity activists expressed concern “about what is known as supply-chain security, the tampering of election equipment during manufacturing,” the Associated Press reported. “A document submitted to North Carolina elections officials by ES&S last year shows, for example, that it has manufacturing operations in the Philippines.”

All three companies “have faced criticism over a lack of transparency and reluctance to open up their proprietary systems to outside testing,” the Associated Press reported. In 2019, the AP found that these companies “had long skimped on security in favor of convenience and operated under a shroud of financial and operational secrecy despite their critical role in elections.”