America Is Worse Than Communist Venezuela 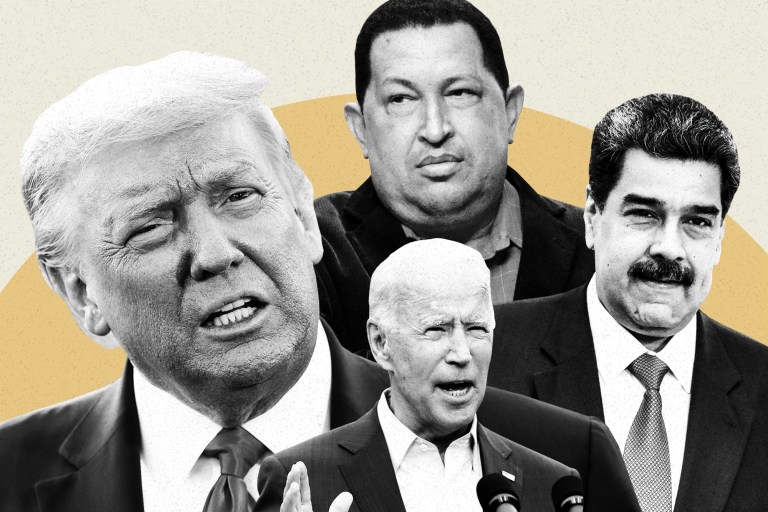 America Is Worse Than Communist Venezuela

Using a strange choice of words, Mary Anastasia O’Grady of the Wall Street Journal wrote years ago about how the communist regime in Venezuela held “the trump card” in national elections because the national electoral council uses electronic voting machines, controls the voter registry, and does not allow opposition audits. She added, “Government critics long held that London-based Smartmatic, which used to provide the regime with voting-machine technology, was complicit in its shenanigans.” Now we find out about electronic voting machines in the U.S. which are becoming known for computer “glitches.”

Here, we don’t have a “national electoral council.” But we do have “news” agencies which pick winners and Big Tech organizations that defend election fraud. The Epoch Times is one of the few newspapers which won’t declare a winner until all results are certified and any legal challenges are resolved. It points out, “State legislatures and the Electoral College are the bodies that certify presidential elections.”

Now we have learned that Diane Feinstein’s husband Richard Blum is connected to the computer “glitches” switching Trump votes to Biden. A report from a neutral source confirms the suspicious nature of this arrangement.

We are no better than communist Venezuela.  In fact, we are in worse shape, since America is supposed to be the leader of the Free World, an example to other countries.

Venezuela has one set of electronic voting machines, and we have another. That’s the difference. Plus, the mail-in voting schemes that President Trump warned about were utilized as well. That makes America’s elections even more suspicious.

In America, we have an Orwellian “Ministry of Truth” which serves the Deep State. For example, if you go to this video about the election process, from the point of view of an attorney sympathetic to Trump, you will find this claim inserted by Facebook, “Election officials follow strict rules when it comes to ballot counting, handling and reporting.” The source is the “Bipartisan Policy Center.” Sounds impressive. Of course, the claim is false, since there are multiple reports of fraudulent vote counting.

Facebook and Twitter treat the American people like dummies eager for direction from the self-appointed “experts.” It would be ridiculous were it not so serious. Twitter even inserts warning signs on most Trump Tweets about fraud.

Remember Catherine Engelbrecht, founder of True the Vote? Her group was harassed by the IRS and other federal agencies under Barack Hussein Obama. She testified, “In 2010, I filed two non-profit applications with the IRS, one for True the Vote, and the other for a community group I had also started called  King Street Patriots. Since those filings in 2010, my private businesses, my nonprofit organizations, and I personally, have been subjected to more than fifteen instances of audit, inquiry, for investigation by federal agencies, including the IRS, OSHA, ATF, and the FBI.”

She understood from the start that the elections themselves were being targeted. That is why the Obama/Biden administration came down on her like a ton of bricks.

In regard to mail-in voting in 2020, she had warned in advance:

All of this was predicted and yet the media allowed these questionable practices to proceed and in fact defended them.

Now, commentators such as CNBC’s Jim Cramer cite Chris Christie as someone who is claiming there’s no proof of fraud and that Trump should just get over his “anger.”

It turns out that Christie is the Trump “adviser” who recommended Christopher Wray as Trump’s FBI director. It was Wray who failed to lift a finger to stop the anticipated vote fraud.

Ironically, all of this is occurring as the United States is considering imposing sanctions on certain people in Belarus for supposedly being “involved in falsifying the results” of an election there. For his part, President of Belarus Alexander Lukashenko looks at what is happening in the U.S. and comments, “The bulwark of democracy. Look what is happening with these elections. This is a disgrace, a mockery of this democracy.”

He’s right. America is a laughing stock. Our system is falling apart, worse than Venezuela and Belarus.

An article about Belarus noted that its president “added that the U.S. elections are being held with serious violations, and the Western countries and the OSCE [Organization for Security and Co-operation in Europe] will be afraid to demand re-elections, as they demand from Belarus.”

He’s right again. The Europeans won’t demand new elections in the U.S. because they hate Trump and want Biden’s New World Order implemented under the rubric of the “Great Reset.”

This scam is global.

*For updates, please go to www.usasurvival.org and use the contact form.