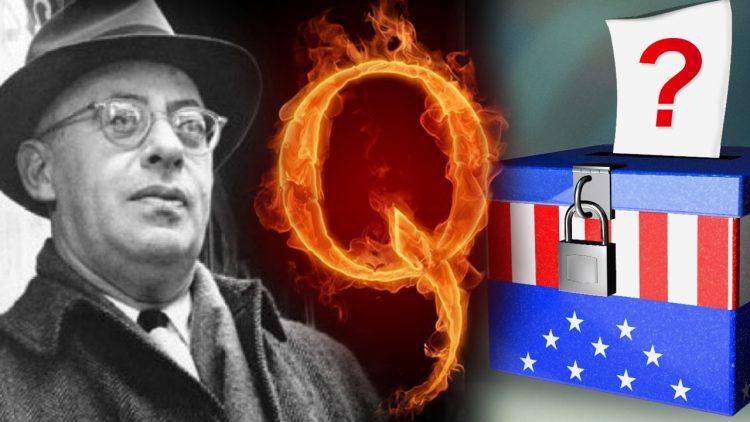 For the past four years, President Trump’s biggest supporters have been enthralled by a mysterious, unidentifiable figure urging everyone to trust the plan. Known simply as Q, this figure seemingly had an answer for every event that took place in Washington D.C. This answer, in most cases, was that Trump was playing a brilliant game of 4-dimensional chess and, every move he makes, somehow exposes how corrupt the Democrats are. The overall message was that Trump’s dazzling strategy would result in the complete and total take-down of the so-called deep state.  The only problem with this theory now is that Trump was just defeated by the swamp he was supposed to outmaneuver. The same swamp, no less that relentlessly accused him of colluding with Russia to steal the election. What is really going on?

Everyone understands that the left is made up of Alinsky type radicals. The ends justify the means mentality is something that most people can interpret as the left doing whatever it takes to get their way.  Alinsky argued in Rules for Radicals, for example, that morality kept people from acting and doing what was necessary to affect change. A higher-level morality, according to Alinsky, was a willingness to corrupt yourself and sacrifice your own salvation, or your own principles for what the left considers the greater good. In other words, corrupting yourself in pursuit of collectivist goals is the moral standard in left-wing politics. From this perspective, it is easy to understand their attempts to steal an election. They have no morals and are willing to cheat, lie and steal to win.

There is a darker, more overlooked side to the Alinsky method – One that has a social science application. Psychologists and other behaviorists, have understood the effects fear has on the human psyche for decades. The book Invasion from Mars: The Study of the Psychology of Panic by Hadley Cantril shows the extents to which behaviorists took advantage of people’s panicked reactions to a radio broadcast depicting an alien invasion.

Such rare occurrences provide opportunities for the social scientist to study mass behavior. They must be exploited when they come. Although the social scientist, unfortunately, cannot usually predict such situations and have his tools of investigation ready to analyze the phenomenon while it is still on the wing, he can begin his work before the effects of the crisis are over and memories are blurred. The situation created by the broadcast was one that shows us how the common man reacts in a time of stress and strain. It gives us insights into his intelligence, his anxieties, and his needs, which we could never get by tests or strictly experimental studies. The panic situation we have investigated had all the flavor of everyday life and, at the same time, provided a semi-experimental condition for research. In spite of the unique conditions giving rise to this particular panic, the writer has attempted to indicate throughout the study the pattern of the circumstances which, from a psychological point of view, might make this the prototype of any panic. (Cantril, 1940)

What is it that science understands about fear that might be useful in persuading masses of people to behave in certain ways? They know that when presented with a frightening choice, a great sense of relief is experienced when presented with a less frightening scenario. This, in the sciences of persuasive communications, is called the fear-then-relief strategy, and it comes right out of a college textbook called the Dynamics of Persuasion: Communication and Attitudes in the 21st Century by Richard Perloff. According to the article Fear-then-relief: Mindlessness and cognitive deficits from the European Journal of Social Psychology, the relief experienced when realizing a fear stimulus was unfounded, and they have another choice, is so overwhelming and arousing, that people then associate that sense of arousal with whatever is creating the relief. In other words, it is possible that people are so relieved with the alternative that it becomes ingrained in their psyche as an absolute. For example, as a writer, I have been critical of Donald Trump’s bump stock ban while many people do not question it at all. Looking at this through the fear-then-relief principle, it is possible to argue, with the looming threat of gun control after the Las Vegas shooting, that supporters of Trump were so relieved that this was the only action taken. This principle, in theory, could be applied to our elections in general. Looking at this from the perspective of voting for the lesser of two evils, Americans have, for decades, accepted candidates that do not live up to American values simply because they are relieved the other guy did not win. A good example of this is the way Trump supporters continually asked people that questioned his actions if they would rather have Hillary or Biden. Trump became unquestionable in their minds because his victory signified the averting of a Hillary Clinton presidency.

What does this have to do with Alinsky or Q? Alinsky wrote that in order to affect social change or start a social revolution, if you will, people must be brought to a state of hopelessness in the current system if they are expected to accept something new.

Any revolutionary change must be preceded by a passive, affirmative, non-challenging attitude toward change among the mass of our people. They must feel so frustrated, so defeated, so lost, so futureless in the prevailing system that they are willing to let go of the past and chance the future. This acceptance is the reformation essential to any revolution. To bring on this reformation requires that the organizer work inside the system. (Alinsky, 1972)

This past week, Americans watched in dumbstruck awe as the Democrats brazenly engaged in voter fraud across the country. They were not even attempting to hide it. In fact, it was almost as if they wanted you to see it. If you are an individual that understands the left’s Alinsky radicalism, then it stands to reason that they are deliberately attempting to make you lose hope in our election system while making you demand change. As an example, this election fraud has already generated demands for a national I.D. card. Something that conservatives generally oppose.

This strategy of change is also referred to as the Hegelian Dialectic, or, the problem-reaction-solution strategy. It derives from Marxist thinking and entails the creation of a problem which demands a solution. The public is essentially manipulated into choosing an option that serves the goals of government.

This could be brushed off as some crazy conspiracy theory however, it must be noted that both Barrack Obama and Hillary Clinton were trained Alinsky Organizers. Clinton, in particular, had a personal relationship with him and was offered a job at his Industrial Areas Foundation training center for organizers. She also wrote a 92 page college thesis on the Alinsky method entitled, There is only the fight.

Does this prove anything beyond a reasonable doubt? No, but it does raise some interesting questions into Donald Trump’s role in all of this, and even Q’s as well. Trump supporters questioned nothing the man did despite the overwhelming evidence showing what he did was different than what he said. The USMCA, for example was hailed as a brilliant remaking of a terrible trade agreement known as NAFTA. Many outlets reported USMCA was NAFTA on steroids, and would only serve to place American trade under global governing bodies. If you mentioned that to anyone you were labeled a troll or a “never Trumper.” Donald Trump’s education secretary signed the U.S. onto the United Nations sustainable development agenda, meaning our kids, in twenty years, will be trained climate change activists. You cannot mention this without being called a liberal or a democrat. The examples are just too many. Another one entails Donald Trump giving billions to Bill Gates for vaccine development after allegedly, withdrawing funds from the World Health Organization. Finally, Planned Parenthood is still receiving hundreds of millions from one of the supposedly, most pro-life administrations ever. Not to mention the fact that Trump signed every spending bill given to him, increasing the debt more than Obama. The point I am making is that Q was vey successful in getting people to follow along because the fear-then-relief principle was applied. People were so relieved that Hillary Clinton did not win after eight years of Obama, they put all their hopes into Donald Trump’s promise of arresting her and draining the swamp. The relief associated with this message rooted in, according to the science behind the principle, the non-questioning attitudes of many Trump voters.

If people will acknowledge that the left is willing to do anything, and that they are indeed employing Alinsky tactics, then what is being argued here is not out of the question. After all, Donald Trump and the Clintons have a long history.

As we watch in shock as the left blatantly steals this election, the question we must ask is why are they are making it so obvious? Even now, Q is still urging Trump voters to trust the plan. The latest theory is that the whole election was a sting operation and corruption would be exposed for all to see. Donald Trump will finally spring his masterplan, and the deep state will be defeated. What is more likely? Donald Trump being a hero and restoring integrity to American elections, or Americans being persuaded into accepting changes they don’t understand because our election system has been exposed as corrupt? If Trump did pull through after all of this and offers reforms to our voting system, would anyone question it? Of course, all of this is just a theory.

David Risselada earned his Master’s degree in professional writing from Liberty University and has a Bachelor’s degree in social work. David is the author of two books. Psychopolitics in America: A Nation Under Conquest and Not on My Watch: Exposing the Marxist Agenda in Education.

Published with Permission of washingtonstandard.com originating from In Defense Of Our Nation