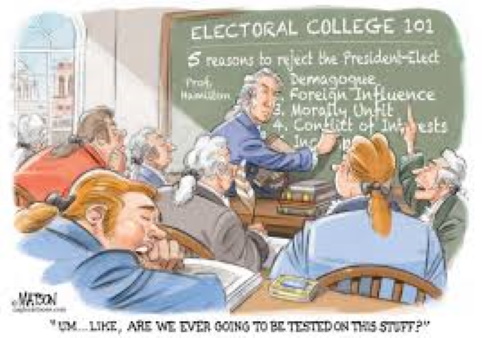 Faced with election fraud, the states can pick electors who will vote for Trump

At this point in the chaos, we know one thing for sure: President Trump is still the president, and he won re-election. Any number of warnings from Twitter or claims to the contrary from “official sources” in the media can’t undermine his claims. In the final analysis, according to the Constitution, electors in the Electoral College vote for the president. This fact is critical in the days and weeks ahead.

In short, the president is not elected by Twitter or the media. He is not even elected by “the people.” He is elected by electors picked by state legislators. Faced with evidence of election fraud, the states can pick electors who will vote for Trump, the legitimate president and legitimate winner. None of this is a mystery. This is the way the system works.

Let’s remember that, in the early hours of Wednesday morning, after Election Day, President Trump declared victory. He said, “Frankly, we did win this election.” There were no ifs, ands, or buts in that statement. He declared victory. He understands that, according to the way elections are usually decided, the votes cast on Election Day decide the winner. On that basis as well, he won. His statement holds as much weight, or even more, than any subsequent statement to the contrary that might possibly be made by Joe Biden or his supporters.

But because he is Trump, the enemy of the Deep State, his claim of victory was disputed.

Transcripts or stories about the president’s remarks tried to put a spin on them, saying his statement of victory was “premature” or even “false.” That’s their opinion. What matters is what the legitimate president of the United State says. Trump has more legitimacy than those opposing him in the media or Big Tech. They have worked to destroy his presidency for years. Why should we believe them now?

Members of the media elected themselves. Trump was elected by the people through a constitutional system.

Stories now appearing that Trump still has a path to victory miss the point. He has already declared victory and has recognized mysterious ballot dumps and irregularities giving certain states to Biden as illegitimate. His perception, based on reality, is shared by many. Twitter censors his and other Tweets about the election fraud. But Twitter is a private entity subservient to the Deep State forces that have been trying to overthrow Trump. Twitter is the same entity that tried to suppress evidence of Biden’s corruption found on his son’s laptop.

At the current time, this is really all that we need to know. The president understands what is happening, since he has been a victim of these forces for four years. He understands the nature of the enemies of our democratic republican form of government better than anyone else. He has lived through their reign of terror and the media’s reign of error.

The media and other Trump opponents can scream all they want. They can dispute evidence of fraud in the election process. They can send more “protesters” into the streets. But what matters is what Trump is saying and doing. He is fighting to save his presidency from the same forces which have already tried and failed to throw him out of office.

When push comes to shove, Trump can tell those who want him out of office to shove it.

It is significant and appropriate that the president’s personal attorney, Rudolph Giuliani, is leading the legal effort against election fraud. As a U.S. Attorney, Giuliani used the power of the racketeering or RICO statute to break up the Mafia. His success helped make him mayor of New York City. In this case, he is up against similar forces. The Deep State is a kind of modern-day Mafia. If he and Trump can succeed in the same way, America will be spared from a country falling into the grip of Mafia-like forces committed to globalism and engaged in massive corruption.

With these stakes, Trump can’t back away from his statements that he won the election. His supporters are depending on him. He can’t vacate the White House under any circumstances. He knows – and they know – that he won.

As the nation moves ahead, it will be important for people to understand that the Deep State, including the forces of censorship and even some “conservative” publications, will work to evict Trump from office

Drudge and Fox News in general have already turned on Trump. It remains to be seen if Lou Dobbs and Tucker Carlson will stay vigilant under pressure. We can anticipate that the Wall Street Journal editorial board will cave.

The New York Post, which was so good on exposing Biden corruption, has sold out, running a story about newly elected Republican Rep. Marjorie Taylor Greene that regurgitates garbage calling her a conspiracy theorist. She is the new face of Republican women in the GOP and won with almost 75 percent of the vote.

I wrote about Greene before, noting that she was the candidate who dared to take on George Soros. Since Trump declared victory on November 3, she has been vocal about stopping the “Biden Steal.” She dares to say that “the Democrats, Big Tech, and the Fake News Media are trying to STEAL this election.”

She adds, “This is the biggest VOTER FRAUD operation in American history.” Greene understands that the forces of the Deep State are deep in corruption of a financial and sexual nature, as represented in the Hunter Biden laptop. She knows that if Joe Biden “wins” the election by hook or by crook, the American people will be denied the opportunity to get to the bottom of this cesspool. America’s constitutional system will be dead, and all of the Obamagate and Biden investigations will be terminated without charges.

She’s right, and the evidence which is available despite the censorship proves her point. So why aren’t more members of Congress following her lead? It’s because House Republican Leader Kevin McCarthy tried to distance himself from Greene’s run for Congress. He is not a true leader.

Republican members of Congress can either choose McCarthy or Trump. The choice is clear. Greene chooses Trump.

Though elected as the leader of House Republicans, McCarthy has roots in the “moderate” wing of the Republican Party, known as the Ripon Society. By contrast, Greene represents millions of Trump supporters and new Republicans who want him to fight for the White House and stay in office no matter what his enemies say and do.

In his 2007 Ripon Society Profile, McCarthy said the historical figures he would most like to meet included the Founding Fathers “because they created a government of individual liberty and freedom that defeated every obstacle of tyranny threatening our way of life over the last 230 years and represented a force of good in the world….”

What would the Founders do in this case? They conceived an electoral system that enables the people to exercise their will through state legislatures and electors who can bypass clear evidence of fraudulent election returns meant to install Biden in office. It’s time to win this one for the Founders.