Here Are the Basics of Libel Laws for Journalists 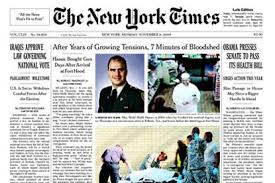 Here Are the Basics of Libel Laws for Journalists

As a reporter, it’s crucial to understand the basics of libel and libel law. Generally speaking, the United States has the freest press in the world, as guaranteed by the First Amendment to the U.S. Constitution. American journalists are generally free to pursue their reporting wherever it may take them, and to cover topics, as The New York Times motto puts it, “without fear or favor.”

But that doesn’t mean reporters can write anything they want. Rumor, innuendo, and gossip are things hard-news reporters generally avoid (as opposed to reporters on the celebrity beat). Most importantly, reporters do not have the right to libel the people they write about.

In other words, with great freedom comes great responsibility. Libel law is where the press freedoms guaranteed by the First Amendment meet the requirements of responsible journalism.

Examples might include accusing someone of having committed a heinous crime, or of having a disease that might cause them to be shunned.

There are several common defenses a reporter has against a libel lawsuit:

In order to win a libel lawsuit, private individuals need only prove that an article about them was libelous and that it was published.

But public officials – people who work in government at the local, state or federal level – have a tougher time winning libel lawsuits than private individuals.

Public officials must not only prove that an article was libelous and that it was published; they must also prove it was published with something called “actual malice.”

This interpretation of libel law comes from the 1964 U.S. Supreme Court ruling Times vs. Sullivan. In Times vs. Sullivan, the court said that making it too easy for government officials to win libel suits would have a chilling effect on the press and its ability to aggressively report on the important issues of the day.

Since Times vs. Sullivan, the use of the “actual malice” standard to prove libel has been expanded from just public officials to public figures, which basically means anyone who is in the public eye.

Put simply, politicians, celebrities, sports stars, high-profile corporate executives and the like all must meet the “actual malice” requirement in order to win a libel suit.

For journalists, the best way to avoid a libel suit is to do responsible reporting. Don’t be shy about investigating wrongdoing committed by powerful people, agencies, and institutions, but make sure you have the facts to back up what you say. Most libel lawsuits are the result of careless reporting.