ANTIFA What We Need to Know 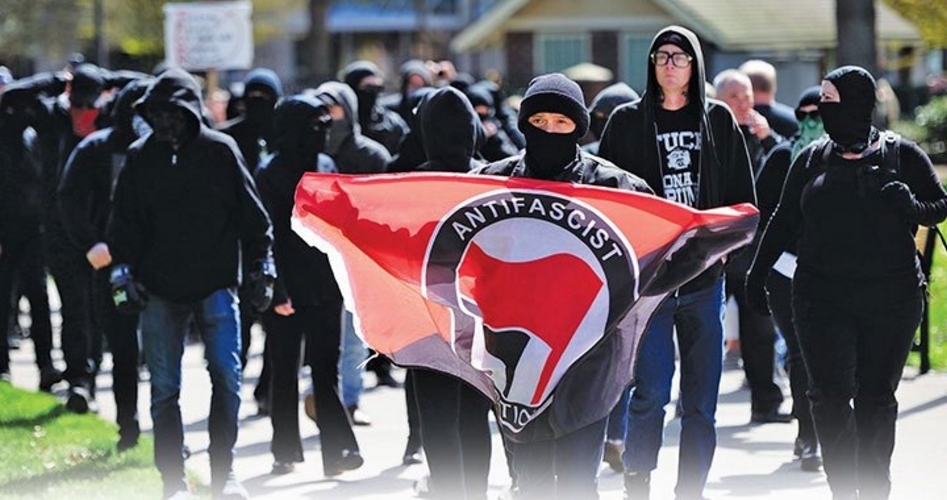 ANTIFA What We Need to Know

Antifa members are generally young, white militants who have bought into the promises of socialistic utopia, and are willing to use violence to achieve it.

As we write (late August 2020), mobs led by Antifa continue wreaking havoc not only across the United States, but throughout Europe, Australia, and Latin America as well. An in-depth report on the international communist/anarchist networks linking the worldwide Antifa “phenomenon” is a subject beyond the scope of this briefing, which focuses on Antifa in the United States.

In the remainder of this report, we will be expanding upon the points listed above. Since so-called Antifa groups burst full-blown onto the political scene four years ago, they have been escalating their violent, revolutionary acts throughout the United States. Antifa-led riots, arson, vandalism, destruction of statues and monuments, and violent assaults on people (Trump supporters, MAGA hat wearers, law-enforcement officers, conservative college speakers, Republicans — anyone who gets in their way or opposes their violent ideology) have been growing in frequency and ferocity.

The 2016 presidential election provided the stage that introduced most Americans to Antifa, as the masked, black-clad revolutionary network led violent anti-Trump “demonstrations” in dozens of cities across the United States. Antifa thugs rioted and disrupted President Trump’s 2017 inauguration and violently attacked people who were attending the event. That was repeated with mob attacks on the Republican National Convention in August of 2020. While claiming to be “antifascist,” Antifa radicals engage in precisely the same type of bullying, intimidation, and terrorizing employed by the fascist Black Shirts of Mussolini and Brownshirts of Hitler to neutralize their opposition.

When President Trump declared he would be designating Antifa as a terrorist organization, media organizations, including the left-wing “fact checking” Snopes website, defended Antifa and declared that the terrorist designation would be impossible, since Antifa is a fluid, amorphous “movement,” not an organization, based on the concept of “leaderless resistance” or “phantom cell” structure. “Without any official structure to the group, or much evidence linking antifa to specific acts of violence, it would be difficult to prove that that body of activists is behind anything,” Snopes declared.

The Antifa obsession with secrecy, decentralization, and masking of their identities does indeed make it more difficult (as with other organized crime syndicates) to identify and prosecute them for their criminal and subversive activities. However, with the arrests of hundreds of Antifa rioters over the past several years, the veil of secrecy is being pierced. And in hearings before the U.S. Senate in August 2020, Justice Department officials stated that they had opened around 300 “domestic terrorism” investigations into the violence across the country since May 28, when the rioting over the death of George Floyd began. Meticulous follow-through on these investigations should lead to many convictions and unravel the secret ties and organization behind the planned chaos.

Many of the leading current Antifa militants are veterans of the Occupy Wall Street “movement,” which pioneered the masked “black bloc” signature attire and “direct action” violence that have become the Antifa brand. The Occupy Wall Street “protesters” were led and schooled by 1960s veterans of the violent SDS (Students for a Democratic Society) and the murderers-bombers-terrorists of the Weather Underground, such as the infamous Professor Bill Ayers.

Coordinating with communist and socialist parties worldwide, together with Marxist, Maoist, and Trotskyist organizations, the Occupy movement succeeded in bringing millions of demonstrators into the streets around the planet. However, Occupy’s fixation on Marxist economics and class warfare caused it to fizzle as economies began recovering following the 2008-2009 financial crisis. Occupy activists then sought to diversify by attaching themselves to other “progressive” causes, such as protests concerning immigration, global warming, oil/gas pipelines, LGBTQ rights, police brutality, prison reform, and racism. In each case, they seek to radicalize and militarize cadres that they can recruit into more violent street confrontations.

Antifa has dramatically increased its profile by joining up with Black Lives Matter. By uniting with BLM, Antifa, which is primarily a white, radical group, has been able to broaden its reach and harness black anger for its revolutionary purposes. This has been a relatively easy maneuver, since BLM’s co-founders (Patrisse Cullors, Alicia Garza, and Opal Tometi) have boasted of being “trained Marxists” and “queer black women” who are trying to overthrow the American system of “oppression,” “hetero-patriarchy,” “capitalist exploitation,” and “racism.” Like Antifa’s, BLM’s heroes are communists: Marx, Lenin, Che Guevara, Angela Davis, Assata Shakur, Mumia Abu Jamal, the Black Panthers, etc.

By labeling themselves as “antifascist” and labeling everyone to the right of Stalin as “fascists,” “racists,”  and “Nazis,” the Antifa thugs have succeeded in conferring immunity upon themselves; no matter how violent they get, they can justify their violence as opposition to the evil of fascism/Nazism/racism. They do not have to prove that their victims are fascists, Nazis, or racists; they need only accuse to justify physical attack. Of course, they only succeed in this transparent deception because of massive sympathetic coverage by the leftist mainstream media, which continue to insist on referring to Antifa hoodlums as “antifascist activists” and casting them as heroic champions of the downtrodden — years after mountains of irrefutable evidence show them to be dangerous terrorists.

One of the many intersections demonstrating the Antifa-BLM-communist-terrorist confluence is a videotaped speech (that has been transcribed and printed on many leftist-anarchist-Antifa websites) by Drexel University professor Idris Robinson in Seattle entitled “How It Might Should Be Done.” It is a speech in which he celebrates the rioting and looting taking place in Seattle and across the country and pays tribute to Bolshevik dictator/mass murderer V.I. Lenin, as well as communist revolutionaries (and convicted cop killers) Mumia Abu Jamal and Assata Shakur. He pointedly disputes as “delusional” the claims of “progressive liberals” who assert the George Floyd “protests were peaceful and non-violent.” Robinson exults in the facts of burning cities, burning police stations, and “cops being shot at,” and repeatedly stresses that this is “revolution,” “insurrection,” “an uprising,” “an insurgency,” and “civil war.”

In an open appeal to sedition, treason, and subversion, Robinson tells his audience, “We must harness civil war as an emancipatory liberatory power. The fundamental goal is to break apart America into a constellation of federated communes.” This breaking apart of America — essentially declaring war on America — he says, can be accomplished by updating the revolutionary program of Harry Haywood, the black Communist Party USA member chosen by the Soviet Politburo in the 1930s to lead a race war of secession to create a Soviet-style “Black Belt Nation” in the American South.

Robinson also approvingly cites communist theoretician Noel Ignatiev. Ignatiev, who was a white Harvard professor, is most infamous for coining the term “white privilege” and calling for “abolishing” the white race. His rantings are the staple of BLM-Antifa tracts and demagoguery.

The American far-left is a bewildering assortment of communist parties and organizations that categorize themselves as Marxist-Leninist, Maoist, Trotskyist, anarchist, anarcho-communist, or socialist. Most of these organizations originated over the past several decades as breakaway factions of the Moscow-directed and Soviet-funded Communist Party USA (CPUSA), or as breakaways from the breakaways. Many of them advocate violent “direct action,” while the CPUSA poses as the advocate of peaceful action. Communist organizations such as the Workers World Party (WWP), Freedom Road Socialist Organization (FRSO) and the Revolutionary Communist Party (RCP) are among the violence-prone groups that provide leadership to the Antifa militants.

The WWP boasts: “We are THE Trotskyists. We stand 100% with all the principled positions of Leon Trotsky, the most revolutionary communist since Lenin.” Trotsky, one of the original Bolsheviks, called for violent, immediate “world revolution,” but lost the post-Lenin power struggle to Stalin. The WWP also describes itself as “a revolutionary Marxist-Leninist party dedicated to organizing and fighting for a socialist revolution in the United States and around the world.” The WWP’s involvement with Antifa was most prominently exposed with the arrest of four WWP communists (Takiyah Fatima Thompson, Dante Emmanuel Strobino, Ngoc Loan Tran, and Peter Hull Gilbert) in the highly publicized toppling of a Confederate statue in Durham, North Carolina, on August 14, 2017. It has also been involved in the ongoing Antifa attacks on statues of Christopher Columbus, Robert E. Lee, George Washington, St. Father Junipero Serra, and others. The WWP uses its Workers World newspaper and website to promote and coordinate Antifa actions. It also works with Alessio Arena, general secretary of Italy’s Antifa-supporting communist group, Fronte Popolare.

The Freedom Road Socialist Organization says on its website: “FRSO is recruiting and building towards the creation of a new Communist Party based on Marxism-Leninism. Its newspaper Fight Back! and its websites (FRSO.org and fightbacknews.org) have promoted the Occupy-BLM-Antifa violence as righteous responses to “racism,” “oppression,” and “Trump fascism.”

Researcher/author/journalist Trevor Loudon has documented the extensive role of the pro-Beijing FRSO’s trained Maoist agitators in orchestrating violent riots from New York to Minneapolis to Chicago and elsewhere. FRSO was among the revolutionary groups providing leadership at the violent disruptions of President Trump’s inauguration on January 20, 2017. FRSO leader Steff Yoreck told street rioters then, “We need to stay in the streets the entire four years opposing Trump and making the country ungovernable.” That is precisely what they are doing.

Defenders of Antifa, including the writer of the Snopes article mentioned above and the “experts” he quotes, assert that no fatalities can be attributed to Antifa. While Antifa secrecy has made it difficult to pin on its activists many of the murders they are suspected of perpetrating or participating in, they are not as clean as their media champions suggest.

Connor Betts, the 24-year-old anti-Trump, anti-police Antifa supporter who shot and killed nine people and wounded 14 in Dayton, Ohio, in 2019, was a self-described socialist and atheist who supported Bernie Sanders and Elizabeth Warren. Betts appeared to have a special hatred for Immigration and Customs Enforcement (ICE), and his social-media postings referenced anti-ICE campaigns by Antifa/communist groups. He also considered Antifa militant Willem Van Spronsen to be a “martyr.”

Van Spronsen, a Dutch anarcho-communist, was killed on July 13, 2019, in a confrontation with police in Tacoma, Washington, while trying to set fire to an ICE detention center, and after pointing his rifle at the police officers. Van Spronsen’s death was mourned by Antifa groups, which viewed him as a fallen comrade. In his “manifesto” published after his death by Antifa-supporting websites CrimethInc and ItsGoingDown.org, Van Spronsen extolled violent anarchist Emma Goldman and communist historian Howard Zinn, whose best-selling A People’s History of the United States has indoctrinated millions of students in anti-American, Marxist-Leninist dogma.

On August 29, Antifa militant Michael Reinoehl, who described himself as “100% Antifa,” gunned down Trump supporter Aaron “Jay” Danielson in Portland, Oregon. Five days later he was killed in a gunfight with local and federal law-enforcement agencies, as they sought to arrest him for the murder of Danielson.

Unlike Black Lives Matter, Antifa groups do not have a central website or an identifiable leadership hierarchy. Many Antifa groups do have (or have had until recently) Facebook, Twitter, and other social-media accounts and websites for their cities or regions, which they have used for organizing and coordinating actions. After years of fomenting riots and violence, however, some of these groups are being deplatformed by Facebook and Twitter. This is largely thanks to public pressure and outrage over the hypocritical double standard exercised by these liberal-left Big Tech social-media firms that have deplatformed conservatives who had not engaged in or promoted violence of any kind, but had merely been deemed guilty of politically incorrect speech. Websites that are being used for promoting, propagandizing, organizing, and coordinating for Antifa include Jacobinmag.com, itsgoingdown.org, enoughisenough14.org, crimethinc.com, fightbacknews.org, frso.org, non.copyriot.com, roar-conference.com, workers.org, refusefascism.org, revcom.us, and cpusa.org.