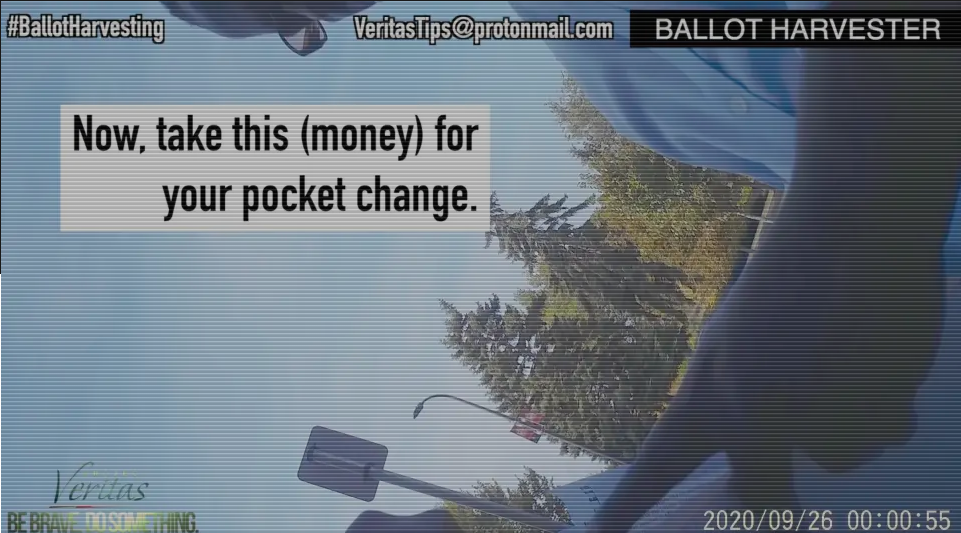 [Minneapolis – Sept 29, 2020] In part two of an explosive exposé, a Minnesota-based source tells Project Veritas that the mastermind behind the rampant voter fraud scheme is Rep. Ilhan Omar (D-Minn.) herself and her extensive political machine. 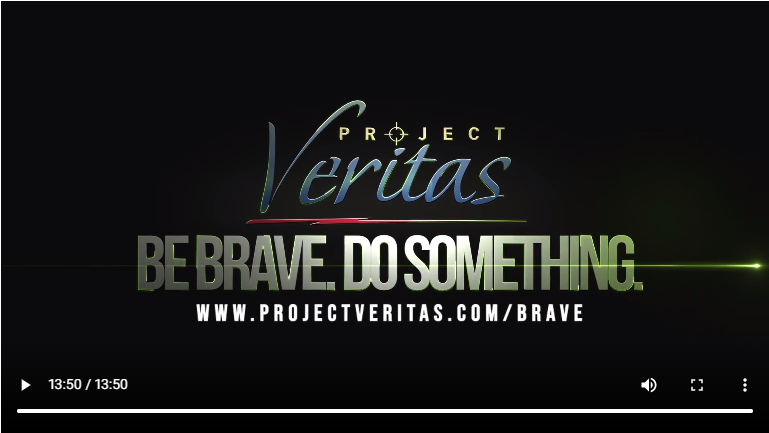 “Nobody would say that Ilhan Omar isn’t part of this,” said Omar Jamal, a Somali community Insider and the Chairman of the Somali Watchdog group. “Unless you’re from a different planet, but if you live in this universe, I think everybody knows it.”

Jamal said Ali Isse Gainey, a senior Ilhan Omar staffer, is at the center of the vote-buying scheme.

Jamal Omar said cash for votes is an open secret in Minneapolis. “The techniques that he [Ali Isse] uses to exchange money for vote — that’s not a secret. It’s, it’s open, and everybody knows about it,” he said. “$200, $300 per ballot received!” 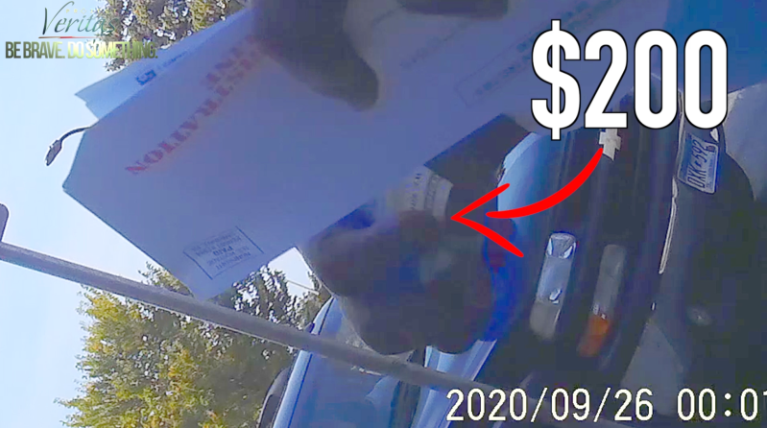 Minnesota state statute spelled out in Chapter 203B, forbids individuals from working as
agent for more than three ballots.

Jamal said the Ilhan Omar operatives would go into the voting booth pretending to help the voter, and instead the operative does the actual voting.

A Minneapolis ballot harvester was recorded with a hidden camera describing how the
operatives make sure the voters vote correctly by walking into the booth with
the voter.

“They help us at the voting booth. They allow them to help us,” the ballot harvester said. “They go inside with us and help us, and they actually do that inside there.”

The ballot harvester said there is no confusion. The operatives doing the voting: “They
actually are the ones who vote, people don’t usually — they do the voting.”

“The black guy [Meton-Meaux] has most of the money, but we took the money from him and we voted for Ilhan,” said Osman Ali Dahquane, a Minneapolis taxi driver involved in local vote buying schemes. 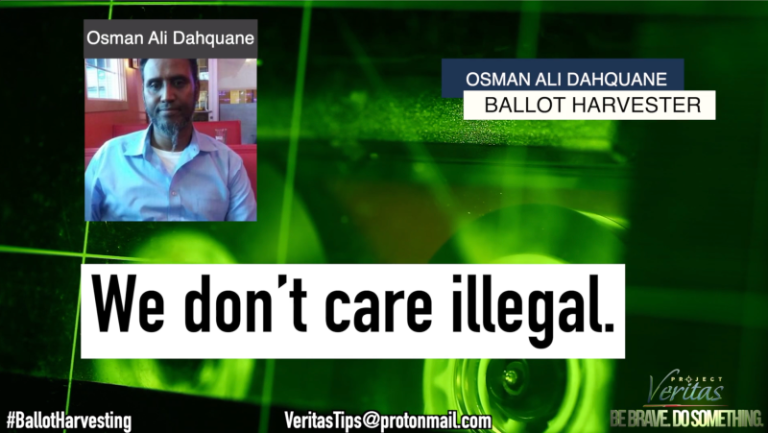 When asked if Ilhan Omar paid for votes, Dahquane said, “Yes, but she paid the wrong guys.”

While he has previously profited from the pay-to-vote scheme, he acknowledges criminals haven’t been arrested or held accountable for their wrongdoings and until they are punished, he has no reason to fear.

O’Keefe said, “Osman Ali Dahquane has a clear, blatant disregard for American’s
political process. He has no fear of his illegal actions — so much so that he
casually mentions having to pay off Al-Shabaab, a.k.a. Al-Qaeda, to open a
business back home in Mogadishu.” 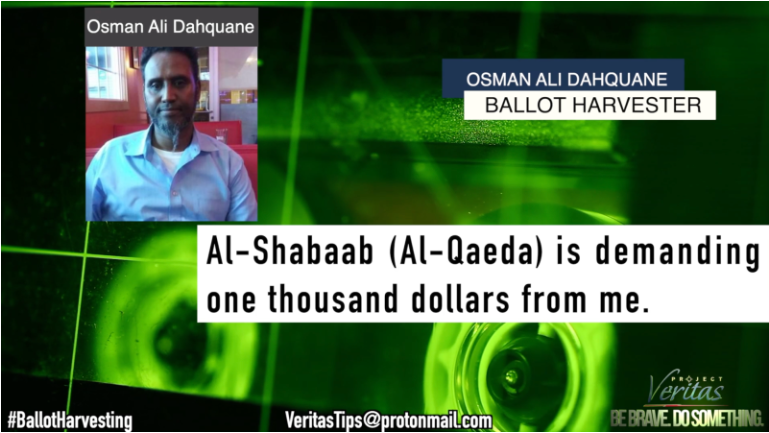 Dahaquane was recorded by a Project Veritas undercover journalist talking about his
hassles trying to open a business in Mogadishu—and the money he had to send to Al-Shabaab as part of the process.

“I sent it from my account. I sent Mogadishu $2,000 last night. Here is the receipt,” Dahaquane said. “I’m requesting a license to be issued at the Ministry of Interior. It’s very expensive. It cost me $2,000,” he said. “Still, I still have to pay Al-Shabaab to leave me alone–Al-Shabaab, they are demanding $1,000.”

Dahquane said when it comes to ballot harvesting, even the election judges are in on it.

Journalist: “Are the election judges themselves paid off?

Jered Ede, the chief legal officer for Project Veritas, said Mohamed and his confederates
may have violated both state and federal election laws, some carrying a maximum penalty of five years imprisonment as well as felony mail theft and bribery laws.

The Minnesota statute, 211B.13(1) prohibits paying a person or receiving money to register to vote or to vote, he said. “This is a state felony punishable by more than one-year imprisonment.”

Beyond paying voters, there are also state and federal laws regarding intimidation of voters, he said.

It’s also a violation of federal law for anyone who votes for others illegally:

“In addition to those statutes, Minnesota has another statute, 211B.11(3), which makes it a misdemeanor to induce or persuade a voter to vote for or against a candidate, while transporting the voter to the polls,” he said.

Source: We are taking the money and we’ll vote for you

Journalist: Are the election judges themselves paid off?

Journalist: So, judges are given money?

Source: Yes, the judges are getting paid. They are corrupted.

A former campaign worker told a Project Veritas journalist that the pay-for-vote scheme is a vertically integrated operation.

Journalist: So, the people that work for [Ilhan Omar] are actually counting the ballots,
counting the vote?

Former Campaign Worker: And they become a manager, in the precinct too.

Journalist: And manage the precinct.

Journalist: So, they do all of it?

Jamal said Americans must fix all voter corruption before it is too late. “If the American people don’t pay attention to what’s happening, it is going to soon – the country will collapse,” he said. The regulations, if you ignore that and you let corruption and fraud become a daily business then tough luck, the country will not exist as they know it.”