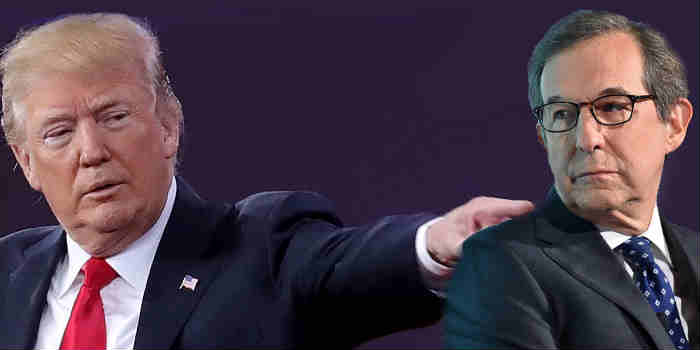 Perhaps at one time in his career, Chris Wallace possessed the integrity and impartial judgment needed to communicate the facts of a story honestly

There is an abundance of destruction, loss of life, and livelihoods resulting from so many riots burning down major American cities controlled by Democrats. However, white supremacists have not been identified as one of the groups responsible for the carnage.

At present, there is no evidence that white supremacist groups are engaged in any high profile collective violence in the country or toward the country.

He could have just as easily and with the same level of relevance asked him to condemn the overhunting of whales in the North Atlantic or the high price of fava beans?

Black Lives Matters and Antifa account for nearly all of the violence tearing through the country. Yet, Wallace made it a point to intimately connect Trump to white supremacist groups even though there is no evidence showing any connection or affiliation between the President and any hate groups, let alone any white supremacist groups.

By asking Trump that loaded question, Wallace achieved two goals for the left.  The debates are supposed to showcase questions focused on relevant and current topics.  The mere mentioning of Wallace’s white supremacy words during the highly anticipated and significantly viewed Presidential debate casts the well-known hate group as participants in the riots currently threatening America.

Hence, Wallace’s insinuation is clear that there is some connection between white supremacists and the looting of stores, the shooting of police, and the killing of the innocent.  Wallace hangs the riots partly on white supremacists while giving Biden, BLM, and Antifa a significant pass, all with one misleading question.  Genius, yes, but still very evil.

Wallace knowingly perpetuated a dishonest media concocted connection between Trump and white supremacists where, according to all of the available evidence, no such relationship exists.

For his part, Wallace was following a perverse leftist program designed to assign guilt to any adversary by demanding continued renunciation for behavior they never committed or agreed with.

In asking the President to renounce white supremacy, Wallace dutifully followed the left’s plan to make never-ending demands on Trump to disavow white supremacy.  In this way, Trump’s continued repetitive renunciation creates a false connection to a hateful position he has never held.

The irony is that although there has never been any direct or indirect evidence that the President has any affiliation with any white supremacy groups, it was recently argued by Biden’s VP pick, Kamala Harris, that Biden’s school bussing policies were close to being racist. That, along with many of his questionable statements over the years regarding African Americans, should, according to the left, make Biden a prime candidate for white supremacy. Yet, Wallace never requested Biden also to renounce white supremacy during the debate.

The truth is that Wallace was never going to require Biden to disavow BLM or Antifa because he knows the left is intimately connected to those groups. And he knows that the left is now intimately tied to Joe Biden.

Sadly, it has become commonplace that to become President of the United States or a Justice on the Supreme Court, Republicans must survive a gauntlet of vicious attacks by Democrats and the leftist propaganda media.

And part of this painful ordeal includes an unreasonable expectation by many that the Republican being attacked must somehow rise above the fray, somehow possess superhuman thick skin, and persevere.

The disgraceful, talking head hypocrites pretending to be members of the media expect President Trump to endure four years of daily verbal assaults on his character and family.  Required to withstand a historic protracted coup attempt by high-ranking law enforcement officials, a fabricated impeachment trial loaded with exposed lies by Congress members.  And do this all while smiling and being polite and courteous to his attackers.

Perhaps at one time in his career, Chris Wallace possessed the integrity and impartial judgment needed to communicate the facts of a story honestly. Still, whenever that period existed, it exists no more.

Rick Hayes lives in the epicenter of liberal land where reality and truth will never encounter a welcome mat.

An award-winning writer and photographer, with over twenty years of professional experience in both fields, Hayes started his journalism adventure after a successful, eye-opening career as a Banker in Wall Street.  Although he spent his early work life surrounded by custom made shirts, expensive ties and the shiniest of shoes, Hayes was an accomplished singer, cutting a few records with a local band and appearing on one of the first cable shows.

Working for a weekly New York paper, in one of the most politically corrupt areas in the State, he began investing his time trying to understand the nature of corruption.