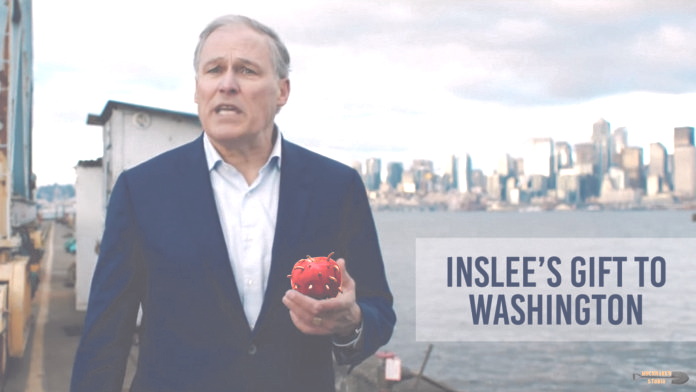 Inslee has a gift for Washington. Here are some maggoty apples from his tree. Handing out these infested apples in Eastern Washington has earned him a new nickname. “Maggot Man” is sure to be remembered by many. 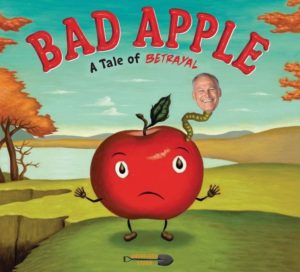 Governor Inslee made a new name for himself in Washington State.  While scandals have been a common occurrence during Inslee’s past eight years as Governor, a recent political fumble has generated more attention and a new, unique nickname for Washington State’s governor.  Like most political screw-ups, this one started out with the best of intentions.  During the Inslee administration, millions of acres of land including homes and towns have been destroyed by wildfire.  This has become a common occurrence in the rural areas of Washington state.  Governor Inslee was making the obligatory photo-op visit to some of the recently ravaged areas in eastern Washington.  As a gesture of goodwill, he brought some homegrown apples with him as gifts.  He left these gifts at various locations along his whirlwind photo-op tour.  Unfortunately, for local farmers and residents, Inslee’s apples were infested with apple maggots, and he violated state law by transporting them across county lines out of quarantine locations and into commercial apple territory. And you thought failure to wear a mask or social distance was bad. 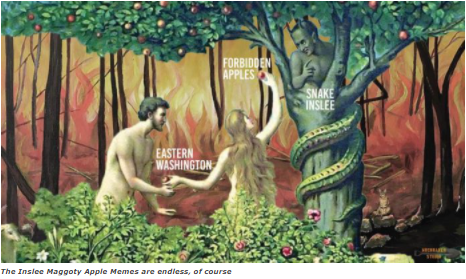 Once local officials realized the problem, a frantic search for the infested maggot apples ensued.  The immediate objective was to recover and destroy the infestation before it could spread and devastate the local economy, which depends on growing maggot-free apples for distribution around the world.  Governor Inslee, of course, is well aware of the importance of the local apple economy.  For a short time, he was an elected Congressman from apple country back in the early 1990s (before voters tossed him out in 1994 – see election results here), and he is known for wearing a little apple pin on his suit jackets.  It seems unlikely Governor Inslee was purposely trying to infest Eastern Washington with apple maggots.  However, he did break the law.  Specifically, this violates RCW 17.24.081(5).  This is a misdemeanor, punishable by up to a $5,000 fine (See RCW 17.24.141).  Inslee will escape punishment because he is the governor, of course.  It seems unlikely he intended to launch an apple maggot infestation by his actions.  It just happened that way.  This fumbling and bumbling into scandals has plagued the Inslee administration from the beginning. 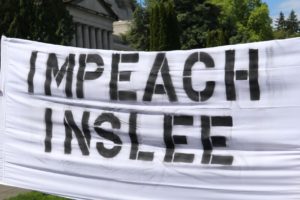 In many ways, Inslee’s attempt to spread apple maggots around the state is the least significant of these scandals and political mistakes committed over the years.  However, it has captured the imagination of voters and residents around the state.  This story has even gone national (see here and here).  While the tame corporate media will usually downplay Inslee’s foul-ups, this one is just too weird and odd for them to completely ignore.  For many, the apple maggot story has become the perfect metaphor for the Inslee administration.  For those already frustrated or annoyed with Governor Inslee, this adds further compost to the pile of Inslee’s legacy.  “Maggot Man” seems to be a shorthand way for some to express their feelings about Governor Inslee. 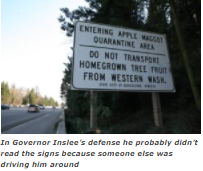 Long before Inslee earned the nickname of “Maggot Man,” he had been generating frustration for many in the state (some might sing modified lyrics to “Rocket Man” while pondering Inslee’s leadership).

Does Inslee even want to be here?

Inslee wants to be President.  He jumped into a crowded field of Democratic Party candidates last year, and we presume he was serious about that effort.  He certainly seemed to enjoy running for President more than running for Washington State Governor (for the 3rd time).  The funny thing about this different Inslee attitude is even reflected in the official campaign images for each race.  For Inslee’s race for President, the campaign pictures him smiling and happy (see below).  For Inslee’s race for Governor, he is pictured stern and not happy (see below).  This further enhances the belief among many political insiders that Inslee’s race for Governor is clearly a consolation prize and Inslee’s eye is on bigger things in Washington DC rather than Washington State. 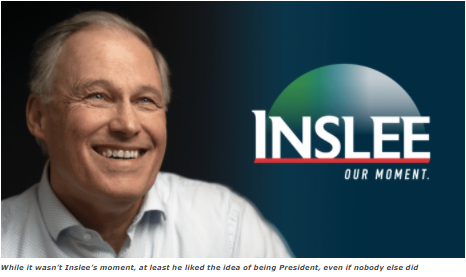 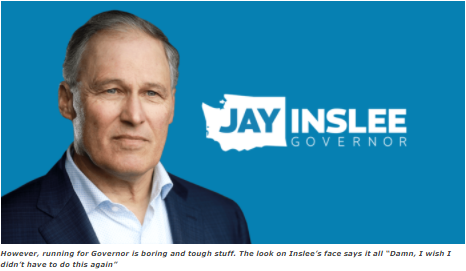 If Inslee is just going through the motions to gain a third term as Governor (with his recent pay raise as a bonus), then it makes sense he wouldn’t be putting much thought into how he runs the state let alone noticing he is handing out maggoty apples to fire victims.

There is a good case to be made that incompetence has plagued the Inslee administration from inception. Recently, the normal ocean of incompetence that has defined Washington State’s bureaucracy made national news again for transferring hundreds of millions of local tax dollars to an overseas Nigerian fraud scheme.  You thought only extremely gullible suckers fell for that one.  Obviously, you haven’t studied Washington State’s bureaucracy in action.  While the reported amount ultimately lost ranges from $1 billion to $600 million (who’s really counting the dollars in Washington State anyway – hint: it certainly isn’t the “Auditor”), the magnitude of this fraud is a new state record, which at least ensures Inslee is #1 in something.  The shame of this specific scandal is that it directly harmed tens of thousands of unemployed Washingtonians who were not able to receive their unemployment since it had been sent overseas to Nigeria. 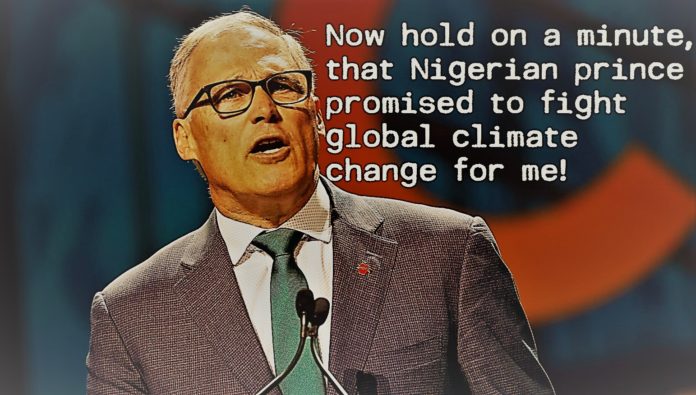 For a disaster of this magnitude to occur, it required insider assistance (government employee and/or contractors) to squander tax dollars at such volume for so long without “being detected.”  This is why  the Feds have now stepped in as part of the investigation (see here).   However, it is possible that we will never know exactly who profited and how they got away with it.  This is Washington State, and these things get buried when politically necessary.  The Auditor didn’t catch it (and gave this agency a gold star for being so great before the fraud).  The State Attorney General didn’t notice (or care).  Apparently AG Bob Ferguson was too busy suing Trump to notice fraud next door.  Inslee has held nobody accountable so far, and accountability in this case appears extremely unlikely. 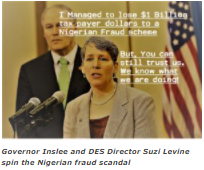 One reason Inslee fears to do his job and fire the obviously incompetent Department of Employment Security director Suzi Levine is because she is a major campaign donor to his political campaigns (as well as her husband), and she has helped Inslee (and Obama) raise big bucks over the years.  From Inslee’s perspective, it is far better to let the state continue to fall apart than to even slightly reduce his access to campaign cash.  This may be a very rational Machiavellian justification for Inslee’s decision to avoid holding anyone accountable, but it does not reflect well on this Governor’s Executive skills or courage (Hey kids, want a  maggoty apple?). 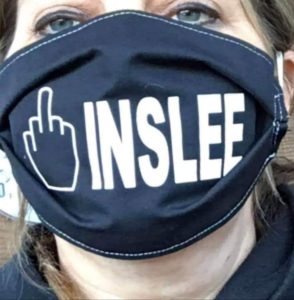 If kicking a billion dollars (or is it $600 million?) to a Nigerian fraud scheme isn’t troubling enough, it is important to put this in the context of previous scandals which also negatively impact the residents of Washington State.  Here is just a small sampling: 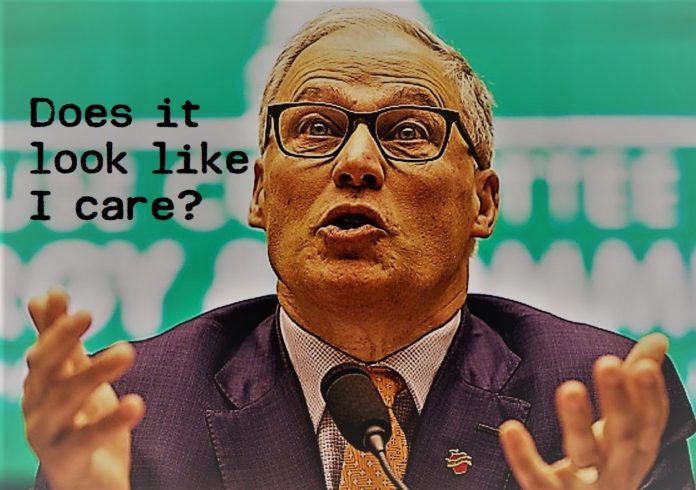 Bumbling forward, timid opposition, and maggoty apples for all 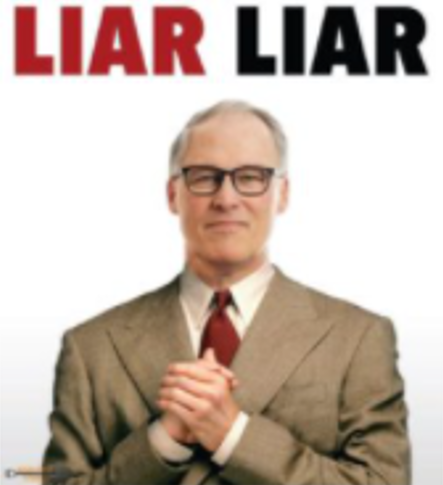 The Inslee administration just ambles along, mostly unconcerned about whether their incompetence, failures, or lack of effective policy is noticed.  For the most part, the corporate media in Washington State is quite tame and timid.  Inslee doesn’t view the Republican “opposition” as being effective, and he clearly feels that no Republicans can stop or constrain his political objectives.  Based on past history, his lack of concern is understandable.  The Republicans have been mostly timid in their official opposition, and the corporate media rarely ask tough questions.

When Inslee was originally campaigning for Governor in 2012, he claimed he would not support higher taxes.  For some reason, a majority of people in Washington State believed him, which is a bit sad in hindsight.  It only took a few months for him to renege on that silly “promise.” 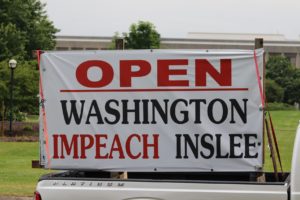 However, there is a rising tide of discontent in Washington State, and it isn’t only the rural residents who Inslee has abandoned, ignored, and on occasion attempted to infect with apple maggots.  This discontent is rising in the urban centers where homeless camps, increasing property crime, and a decreasing quality of life is palpable and accelerating (funny how defunding the police doesn’t improve the quality of life or public safety).  Inslee may be willing to write off rural Washington, but eventually those who see the decline and lack of leadership in the neighborhoods and urban areas of Washington might not want to take another bite out of the Inslee maggot apple either. 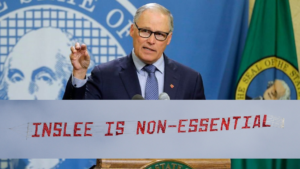 Inslee will ignore and laugh at the stupid Republicans as much as he wants.  He doesn’t believe they matter.  He can let the bureaucracy careen off the rails into scandals and failure with no consequences as he sees fit.  He needs the public sector union cash, and their votes.  He can rely on the corporate media to give him a pass most of the time and reserve the hard questions for someone else.  Who pays attention to local news anyway?  Inslee can keep his eyes fixed on the other Washington on the banks of the Potomac rather than Puget Sound, and he can negotiate a plum political position assuming Trump loses the election.  This probably makes him happy and keeps him interested.  However, eventually, his mismanagement and failures will catch up to him and it could be more than just the rural residents of Washington State who start calling him “Maggot Man.” 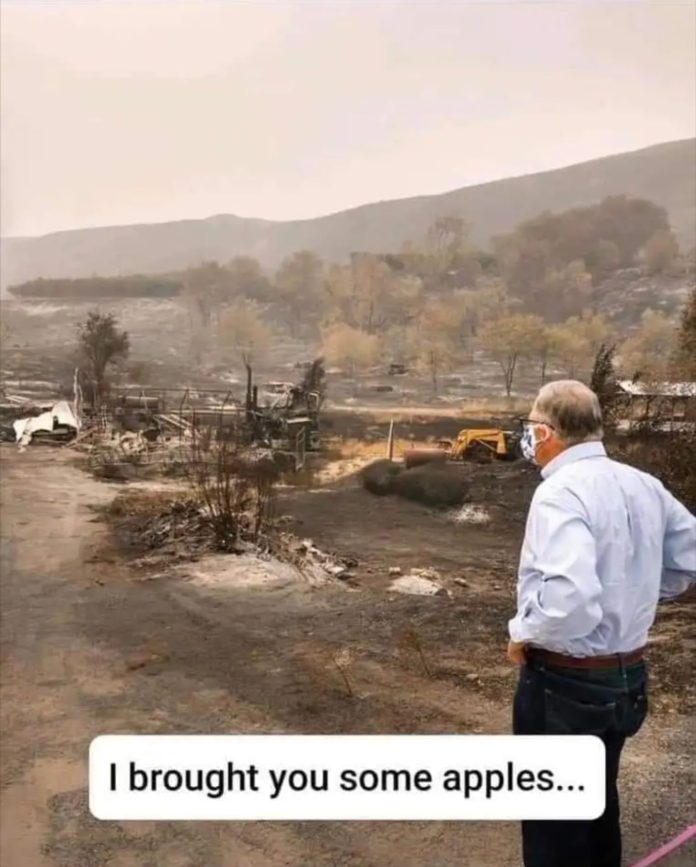 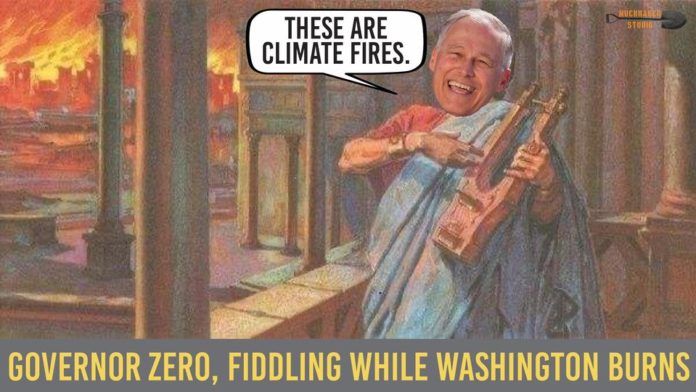 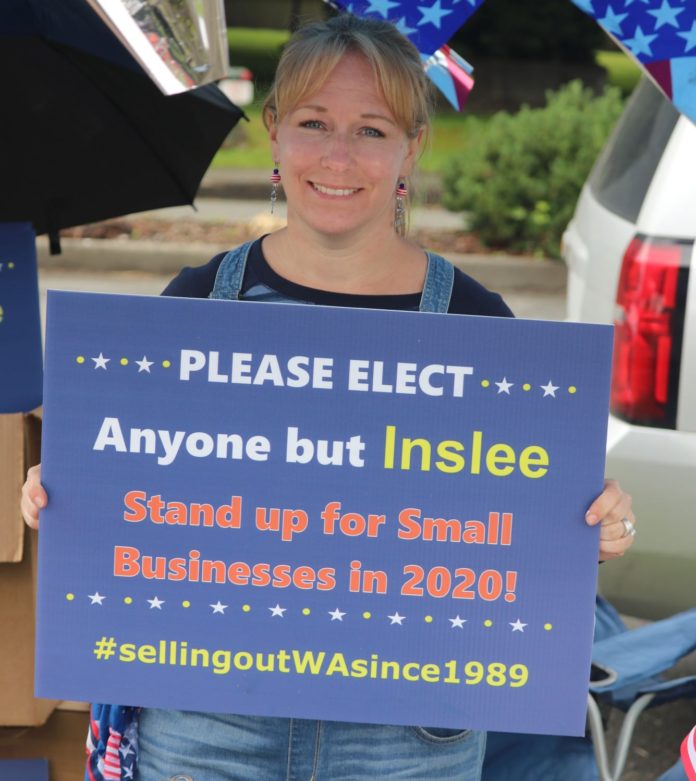