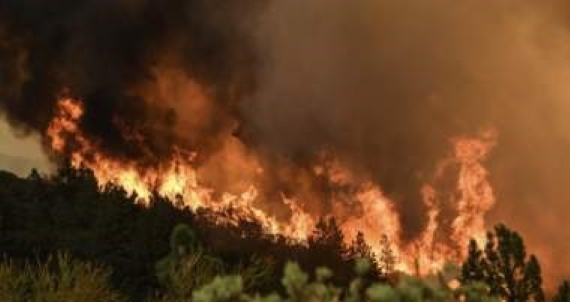 Here we go again. It’s a tragic, annual — and predictable, preventable — event. Once again, uncontrollable wildfires are incinerating millions of acres California, Oregon, Washington, and other parts of the West. And, predictably, the “progressive” politicians, along with their enviro-activist and media allies, are once again blaming global warming for the infernos that their own infernal policies have created. Presidential aspirant Joe Biden, Barack Obama, Washington Governor Jay Inslee, California Governor Gavin Newsome, House Speaker Nancy Pelosi, billionaire activist Tom Steyer (to name but a few) are pointing fingers of blame at “climate change,” as well as at President Trump and others they vilify as “climate-change deniers.”

Former president Barack Obama tweeted on September 9: “The fires across the West Coast are just the latest examples of the very real ways our changing climate is changing our communities. Protecting our planet is on the ballot. Vote like your life depends on it — because it does.”

“You take away logging, grazing and maintenance, and you get firebombs.”

As The New American has been reporting for decades, forest mismanagement, not global warming, has created the conditions for the recurring raging infernos: forests clogged with huge fuel loads of underbrush, along with bug-infested dead and dying trees. (See, for instance, going back to 1995, our article “Fueling the wildfires: California’s deadly wildfires expose federal land management policies.”)

In the above-mentioned article, we cited a 1999 U.S. General Accounting Office (GAO) study entitled “Catastrophic Wildfire Threats,” which warned that “39 million acres on national forests in the interior West are at high risk of catastrophic wildfire” due to unnatural and excessive tree density, massive buildup of undergrowth, disease and insect infestation.

For decades, forestry experts have been decrying these conditions on lands controlled by the federal and state governments. They have been trying, to no avail, to reverse the radical environmental policies that have dominated fedgov and stategov forest mismanagement and that have guaranteed a continuous cycle of wildfire devastation.

One of the experts who repeatedly warned of the coming inferno is Dr. Thomas Bonnicksen, professor emeritus of forest science at Texas A&M University. Weeks before the outbreak of California’s 2003 firestorm, Professor Bonnicksen expressed his grave concern at the mounting danger in California’s mismanaged national forests. His August 24, 2003 written statement to the U.S. House Committee on Resources appears prophetic in view of the devastating fires that ravaged the San Bernardino Mountains area in October 2003.

“I have been working in California’s forests since the late 1960s,” he said. “Never have I seen anything more dangerous than the overgrown, beetle-ravaged forests of the San Bernardino and San Jacinto Mountains. I am concerned for the safety of people living in communities surrounded by these forests.”

Dr. Bob Zybach, an experienced forester and environmental scientist, is one of the many other experts who have pointed out that government policies have curtailed not only logging, but also forest thinning, forest road maintenance, and livestock grazing as well, all of which worked to reduce the forests’ fire vulnerability.

“Mostly fuels were removed through logging, active management — which they stopped — and grazing,” Zybach said in an interview. “You take away logging, grazing and maintenance, and you get firebombs.”

Todd Myers, the environmental director at the Washington Policy Center in Washington State, notes, “While blaming climate change is a useful political ploy, it distracts from a policy approach that can actually reduce catastrophic fire.”  “Even if the United States meets the most aggressive climate targets, the total impact on global temperatures would be a fraction of a degree by 2100,” he continues. “Given that temperatures can vary from summer to summer by several degrees, the most aggressive climate policy will do nothing to stop the fires. Thinning, however, can yield benefits in the near future. Focusing on climate change but ignoring harvests in unhealthy forests is backwards and distracts from solutions that are necessary to prevent more smoky summers.”

Investigative journalist Katy Grimes, editor of the California Globe, accuses the militant enviro lobby for the supernova fires that are devastating California over and over again. “For decades,” she writes, “traditional forest management was scientific and successful, until ideological, preservationist zealots wormed their way into government and began the 40-year overhaul of sound federal forest management through abuse of the Endangered Species Act and the no-use movement.”

“Today, only privately managed forests are maintained through the traditional forest management practices: thinning, cutting, clearing, prescribed burns, and the disposal of the resulting woody waste,” she observes. “And private lands do not suffer the wildfires the rest of the state does. Yet the same climate change impacts private lands as public lands, but private forests are not burning down because they are properly managed. Or if a fire does break out on privately managed forest land, it is often extinguished more quickly and easily because the trees aren’t so close together, and the underbrush has been cleared away.”
Grimes quotes Representative Tom McClintock (R-Calif.), who has warned, “Our forests are now catastrophically overgrown, often carrying four times the number of trees the land can support.  In this stressed and weakened condition, our forests are easy prey for drought, disease, pestilence and fire.”

“Forest fires, fueled by decades of pent up overgrowth are now increasing in their frequency and intensity and destruction,” Representative McClintock emphasizes, adding, “excess timber WILL come out of the forest in one of only two ways.  It is either carried out or it burns out.”

Burning Up the West: Feds, Greens Cause Catastrophic Fires

War of Words Over California Fires Heats Up