Violence and Murder: the Left Returns to Its Roots 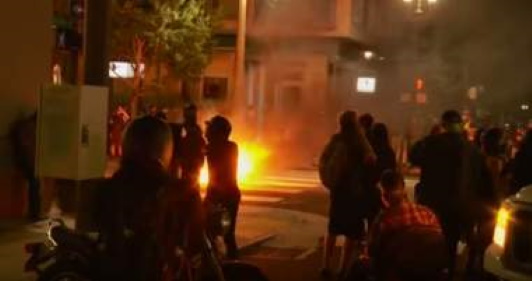 Violence and Murder: the Left Returns to Its Roots

Any honest study of American history shows the tie between the Democratic Party and violence and murder. Support on the Left for the recent violent rioting is no exception. Slavery, KKK, lynchings, anti-Chinese immigration laws, anarchists, bombings, segregation, and the Weather Underground were all tools used by the Democratic Party to force their will onto others. Democrats continue that tradition by supporting Antifa and Black Lives Matter, groups that more resemble Hitler’s Sturmabteilung (SA) than the grass-roots protest groups the Left claims they are.

The Left’s support for BLM, Antifa, and the “mostly peaceful” protests turned deadly when Jessica Doty Whitaker, a 24-year-old white mother, was murdered in Indianapolis by BLM supporters after saying “all lives matter” — an incident that was conveniently ignored by the mainstream media and the Left. However, it was in Portland that the murder of Trump supporters could no longer be covered up.

Deciding to show their support for President Trump, a group from Portland organized a “Cruise Rally” to “gain support for our Great President!” The rally creators intended to avoid any violence between the groups by bypassing the downtown area.

Disregarding the instructions to avoid downtown, a group of vehicles left the designated route and went into the downtown core. Once in the city center, rioters began spraying urine and throwing objects at the pro-Trump cars. Those in the vehicles retaliated with paintballs and pepper spray. Aaron Danielson, along with his friend, Chandler Pappas, left the caravan on foot and walked through the rioters, both wearing hats supporting the right-wing group Patriot Prayer.

Along their way, Michael Reinoehl allegedly confronted them, and after a brief verbal exchange, Danielson pulled out some mace before Reinoehl shot and killed him.

According to Pappas, he and Danielson were “hunted down” because of their hats. The conservative group Understanding the Threat offered a breakdown of footage of the event that corroborates Pappas’ claim of premeditated murder.

One of the videos released after the shooting shows several members of BLM rejoicing over Danielson’s death: “He was a f*cking Nazi. Our community held its own and took out the trash.” Another depicts a man saying, “We got a Trumper right here,” followed by two shots.

Portland Mayor Ted Wheeler, the first of many Democrats to go full-on Joseph Goebbels, attributed the Portland violence to President Trump, saying, “Do you seriously wonder, Mr. President, why this is the first time in decades that America has seen this level of violence? It’s you who have created the hate and the division.”

The right-wing group Patriot Prayer and self-proclaimed militia members drove into downtown Portland last night, armed and looking for a fight. Every Oregonian has the right to freely express their views without fear of deadly violence. I will not allow Patriot Prayer and armed white supremacists to bring more bloodshed to our streets.

Maybe the governor forgot that it was an unarmed Trump supporter that was shot in cold blood?

We must not become a country at war with ourselves. A country that accepts the killing of fellow Americans who disagree with you. But that is the America that President Trump wants us to be, the America he believes we are.

As a country, we must condemn the incitement of hate and resentment that led to this deadly clash. It is not a peaceful protest when you go out spoiling for a fight. He [Trump] is recklessly encouraging violence. He may believe tweeting about law and order makes him strong — but his failure to call on his supporters to stop seeking conflict shows just how weak he is.

So once again, we are treated to the Democrat’s favorite line since Trump became president: It’s all Trump’s fault.

Reinoehl, the “racial justice protester,” was shot and killed by police officers on September 3 in Lacey, Washington.

Biden responded to Danielson’s shooting by saying the president was supposed “to bring people together.” Yet his running mate, Kamala Harris, in an interview given to Stephen Colbert, smiles as she says of the riots:

So, in a moment of clarity, Kamala admits that defeating Trump will not stop the violence. So, the question is, what will?