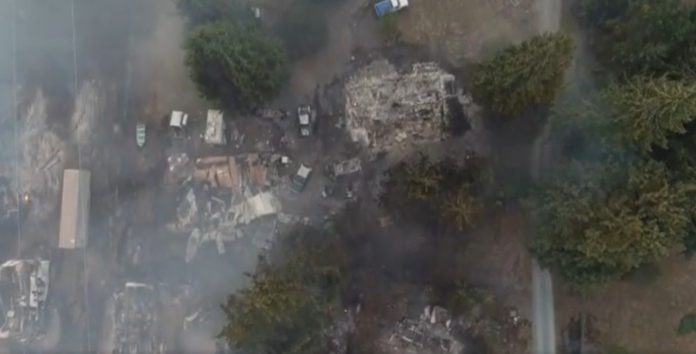 Image captured by drone of fire damage near Graham, Washington 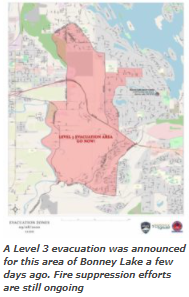 **Updated to include photo of SR 167 arsonist, and additional articles on this topic – see end of article**Read the article – Obviously not all fires are arson. Not all arsonists are part of the Antifa gang (although a distressingly large number of them seem to like burning things down).

Recently, there have been a rash of rural brush fires in Washington State, including some significant fires in the Bonney Lake area, forcing mass evacuations in the local neighborhoods and rural communities in that area.  The volume of these fires is not typical for Western Washington.  Unlike California and Eastern Washington, Western Washington tends to be blessed with ample rain, lower average temperatures, fewer lightning strikes (see map here), and fewer widespread forest fires which tend to be more common in arid parts of the Western United States.  However, it appears that a distressing number of these fires are not accidents, and willful arson is the cause.  Who are these arsonists, and is it an organized effort? 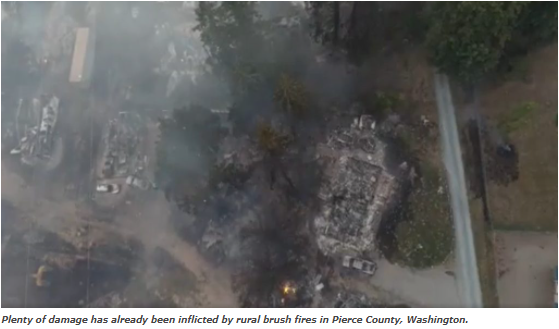 For example, earlier on Thursday, September 10th, the State Patrol arrested a Puyallup man who had started a fire along State Route 167 at North Meridian.  Apparently, according to this story, this genius was livestreaming on Facebook the fire he had just started, and apparently he had been reported earlier in the day walking along the highway with a lighter.  Ok, there are weirdos out there, and there always have been, so one firebug doesn’t mean we have a rash of arsonists patrolling rural areas (although some law enforcement sources are warning about coordinated attacks as reported here).  However, according to one report (linked here), it looks like this guy was associated with Antifa (see here as well).  He might already be out on a $1,000 bail (although some are reporting this is from an earlier arrest, and he was also arrested for another crime and is currently detained by Pierce County). He may not be alone in his pursuit of the “mostly peaceful” revolution, which seems obsessed with arson as a “mostly peaceful” tactic of their movement. 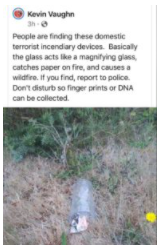 Now a recent report, from the Graham area in Pierce County where a local rural resident captured on his surveillance camera, a vehicle driving by his field, stopping the car, a fire starting in the field, and then the car driving off.  Fortunately, the fire died out before it could cause any serious damage, but that really looks like arson.  There are also reports to watch out for homemade time delay arson devices (which look pretty questionable, crude and marginal to me). The alibi benefit for those who set them (assuming this is true) is even if they are caught they will just claim they were littering rather than trying to burn the area up.

While fire investigations tend to take a back seat to suppressing the fires, and there are a lot of random fires throughout southwest rural Washington right now, this raises some questions.  Just how many of these fires are being started willfully?  For those paying attention (which admittedly, excludes most of the corporate media), we’ve been watching nightly attacks on buildings in urban centers in both Seattle and Portland where “mostly peaceful” arson is being committed repeatedly using Molotov cocktails and other devices as our friendly BLM/Antifa hone their arsonist skillsets. 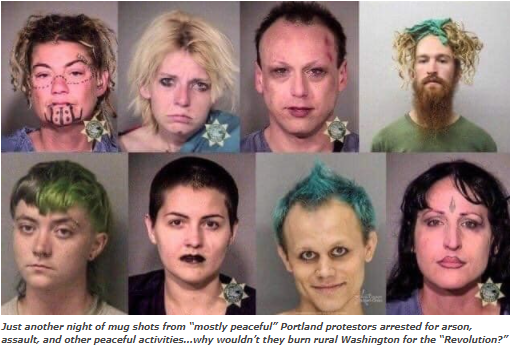 Looking at who these folk actually are when they actually get arrested (see here), does anyone really believe they wouldn’t start rural fires just for fun, practice, and the joy of burning up rural Washington?  If these types of “mostly peaceful” Antifa types believe it is smart and revolutionary to burn cars, buildings, and toss Molotov cocktails in our cities, why wouldn’t they try burning down rural Washington (and Oregon)?  They probably believe it would be easy to get away with the crime, and other than the recent idiot arrested by the State Patrol yesterday, most of them probably can do this with far less chance of arrest than in downtown Seattle or Portland.

What can you do about it?

Rural residents of Western Washington tend not to worry about outdoor fires that much because they are not so common.  However, forest and brush fires can become conflagrations if the conditions are right (and they are dangerous right now for a few more weeks).  Some common sense things you should do on your property (and help your neighbors as well): 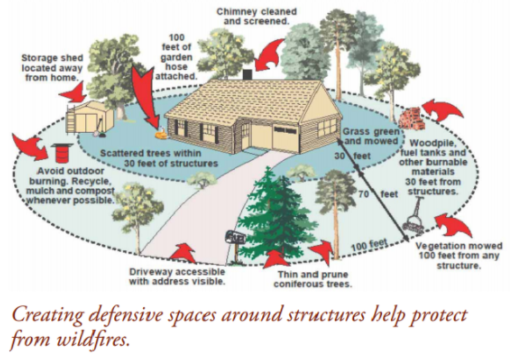 Rural forest fires are a hazard by themselves, and between accidents and lightning, they can happen.  However, it could get far worse than normal when there are people running around for whatever deranged cause they support who also believe that burning your home and property will help with their Revolution or their “wokeness” or whatever.  These are strange days. 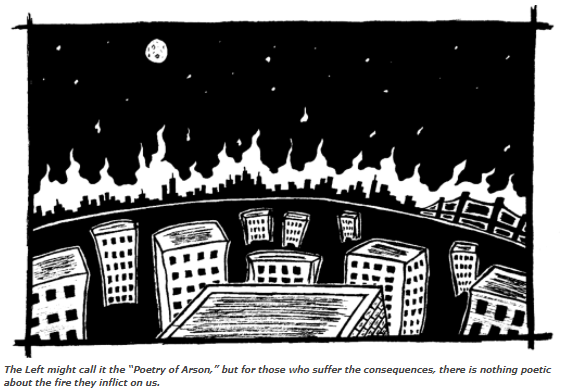 Antifa arsonist arrested near Tacoma, WA after livestreaming himself

Eastern Washington woman arrested for starting fires while crews worked to fix fallen power lines (not yet known if she is connected to Antifa, so at this point, just another arsonist)

Fatal fire in Southeast Washington being investigated as possible arson

New York Times: 10 dead in California as Wildfires spread on West Coast – subheading – More than three million acres have burned in California, and officials said one of the most damaging fires in Oregon may have been deliberately set.