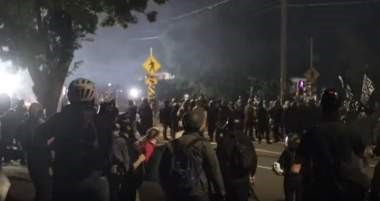 Sun Tzu tells us to know our enemy, and that includes not underestimating our enemy.

The common perception among American patriots, constitutionalists, and conservatives is that Antifa are clowns — unathletic losers living in their parents’ basements who like to roleplay war in all black clothing but who stand no chance against someone who can actually put up a fight.

In fact, “Patriots vs Antifa” videos, in which members of the left-wing mob have a rude awakening at the hands of conservatives, have become a popular genre on YouTube.

In many cases, the common perception of Antifa holds true, particularly in Republican strongholds. But it would be unwise for patriots to ignore that, at least in some areas (particularly urban Democrat strongholds), Antifa is more than just a bunch of malnourished social rejects trying to alleviate their boredom with hooliganism.

A close look at Antifa activity in certain regions shows that the movement is not the loose affiliation of independent groups it’s commonly believed to be, but highly organized with a centralized, top-down structure.

A patriot by the alias JD at the Survival Blog described his experiences and observations while infiltrating Antifa cells in Michigan.

Wrote JD: “The narrative being presented was that these protests were not centrally organized and that they were grass-roots protests just springing up in response to social issues. My time inside the protests verified that this just isn’t true; they are very organized and are being planned by someone.”

He began by discovering protests in the area using Google and social media. He then began attending them, blending into the crowd with appropriate clothing and spouting the left-wing talking points (“It’s important to note that these protests require 100% ideological agreement or they will approach you and become confrontational, so I made sure I was chanting along,” JD recalled).

According to JD, Antifa works alongside another organization, RevCom, to provide “security” at these events.

“I noticed almost immediately that despite the man who said he was the RevCom leader, a young man named Ethan, that I would later have many interactions with, was actually in charge. He is a security team leader within the ANTIFA organization,” JD wrote, going on to note that Ethan and his security/medical team were at every protest he attended in Michigan, always using BaoFeng Handi-talkie radios to communicate.

According to JD, “Ethan himself most frequently wears Interceptor Body Armor and a Guy Fawkes mask, while dressing in black and red.” During a protest at the Michigan State Capitol, the RevCom/Antifa and BLM security teams all wore soft armor and helmets and openly carried firearms.

JD noted that Antifa recorded license plate numbers of vehicles they deemed “suspicious” and intimidated counter protesters with threats of violence, forcing them out of the areas they occupied.

“It’s important to note that they had no authority to drive people off the Capitol grounds, but the State Police allowed them too, and never intervened when the BLM/ANTIFA crowd forced someone out,” JD said.

In his summary, JD concluded that “the protests are organized by a central organization,” they “have trained and professional security teams,” and they “are completely willing to use arms and force.”

In another story that confirms JD’s reports of Antifa organization, three well-trained U.S. military veterans who traveled to Portland recently discovered that Antifa is more dangerous than one would like to believe.

The group was in the city so that two of them could see the area, as they were going through the hiring process for the Portland Police Department. They went to the Federal Courthouse to get a close look at a protest (there was no riot declared at the time). But when the mob saw that the three men weren’t part of their group, the veterans were blinded by strobe lights, pepper sprayed, hit by baseball bats, and had rocks thrown at them. Then a dangerous chase began:

They chased us for 11 city blocks. They had a convoy of about 25 vehicles that cut us off at the next intersection, They had scouts on the corner with radios, they had a drone following us, they had a bull horn calling us Nazis, and the crowd was following a red strobe light that was up in the air on a stick, so they would announce Nazis and then people would follow the red strobe light, That video is just the beginning, I’ve got a f*cking fractured hand from a baton, everyone of us has black and blue bruises up and down their legs and back, I had a guy spit in my face from 6 inches away, call me a pussy and a coward for not doing anything about it, and then tell me that he was going to find where I live, rape my mother, rape my children in front of me and then kill me.

The author of the article said he and his friends restrained themselves from using their concealed weapons out of fear of the legal consequences.

Eventually, they made it to safety and were approached by police, who had been watching the whole show from afar:

[The police officer] said he knew that we’ve been pepper sprayed and we’re having trouble seeing, I kind of snapped at him, Like hey motherf*cker, You’ve been watching this whole thing f*cking unfold and you didn’t intervene at all or light the crowd up or something? He started laughing and he was like, Man, if I got out and tried to help you guys, my f*cking car would be on fire right now, and I’d be running next to you.

We don’t have to wonder who’s pulling the strings. We already know that left-wing globalist billionaires such as George Soros are funding Antifa and Black Lives Matter. Furthermore, as the globalist financiers are intimately connected to the governmental Deep State, there is little doubt that traitorous agents in the intelligence community are helping Antifa and perhaps providing the training. After all, the mass mobilizations in the streets we are seeing are not unlike the “color revolutions” in the early part of this century, which were fomented by the CIA.

The establishment is, in fact, calling for mass street uprisings on and after November 3 to keep President Trump from “prematurely” declaring himself the winner of the race amid the “inevitable” delay in counting that mail-in voting will cause.

One establishment organization, the Election Integrity Project, says that the leaders of these uprisings will be “emerging racial justice leaders,” meaning they are specifically using the Black Lives Matter movement to prepare their agitators for the storm that will come after the election.

Americans must step up and fight this agenda now. If we wait before the threat is at our door, it could be too late.