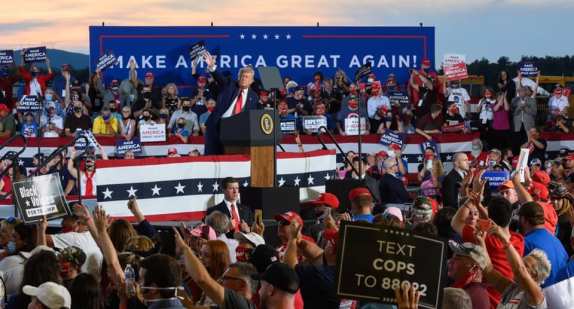 If you had any doubts about the establishment media’s commitment to defeating President Trump’s bid for reelection this past week’s fabricated story of Trump disrespecting America’s fallen during the 75th anniversary of D-Day ceremonies should put those doubts to rest.

But there’s another more insidious line of attack on Trump’s reelection that has begun to be implemented – sketchy polls showing Trump voters abandoning his candidacy.

According to Reuters reporter Chris Kahn, a new Reuters poll shows, “With less than two months to go until the U.S. election, President Donald Trump is having trouble energizing his core supporters, especially white voters without college degrees who were key to his victory in 2016…”

Mr. Kahn further reported that the analysis, based on Reuters/Ipsos national opinion polling from May to August and 2016 exit poll data, found that Trump has lost support among non-college educated whites, who made up 44% of the U.S. electorate four years ago and heavily favored the Republican over Democrat Hillary Clinton.

Trump is still more popular with this group than Democratic presidential nominee Joe Biden, with 46% saying they would vote for Trump, compared with 34% who back Biden. But his 12-point advantage in August is down from a 21-point lead in May, and well below the 34-point advantage he had over Clinton.

What is more worrisome for Trump, claims Mr. Kahn, is that the constituency’s commitment to voting has remained flat this year, while interest has risen among groups that lean toward Democrats: minorities, women, urban and suburban residents and people with below-average incomes.

Reuters does not post their sample size, distribution, or methodology, so we don’t know if the poll oversampled Democrats, included non-voters or was otherwise defective.

And the Reuters poll is strongly at variance with Scott Rasmussen’s findings in his post-convention polling, which found “Enthusiasm about the election continues to grow following the two major parties’ conventions, especially among Republicans.”

Rasmussen found eighty-five percent (85%) of Republicans are now excited about the choice between Trump and Biden, up from 75% in mid-July. This compares to 71% of Democrats, unchanged from six weeks ago, and 54% of unaffiliated voters.

Among all likely voters, 70% are excited about the Trump-Biden contest, while only 23% now say they will simply be voting for the lesser of two evils. The number excited about the contest is up from 60% in late April and 67% in July.

The Rasmussen poll was a survey of 1,000 likely U.S. voters was conducted August 30-31, 2020 by Rasmussen Reports. The margin of sampling error is +/- 3 percentage points with a 95% level of confidence. Field work for all Rasmussen Reports surveys is conducted by Pulse Opinion Research, LLC. Click this link for their methodology.

Does this mean the Reuters poll is fake?

Not necessarily, the bottom line is we don’t know and can’t tell because they don’t disclose who they polled, how many they polled, or the demographic and geographic breakdown of the sample. In short, they could have (intentionally or unintentionally) over-sampled hardcore Democrats or over-sampled states Trump lost and as long as the results fit the narrative that Trump is losing support, the poll is never questioned by others in the establishment media.