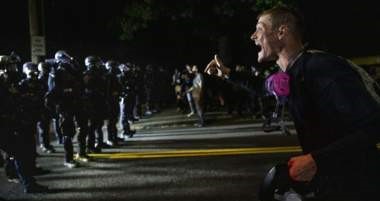 The Transition Integrity Project, an organization with ties to George Soros’ Open Society Foundations and to the Chinese Communist Party-linked think tank The Berggruen Institute, has outlined several tactics the Left and Deep State plan to use to secure a Biden victory in the 2020 presidential election, including mail-in voting, suppression of speech via social-media censorship, and “mass mobilization” (read: riots) on America’s streets.

The Transition Integrity Project ostensibly serves as a “bipartisan” bulwark against President Trump to ensure he concedes should he lose the election. It is filled with establishment figures such as former Hillary Clinton campaign chair John Podesta and has gone so far as to hold war games simulating what would happen should Biden refuse to concede the election.

The Transition Integrity Project operates along the belief that President Trump will try to steal the election. To supposedly stop this from happening, the group proposes several ideas and initiatives, including discarding the traditional notion of an “election night” — that is, they want Americans to abandon the idea that the winner of the presidential race will be known on the night of November 3. They even go so far as to call it “dangerous” to talk about an election night.

The group writes in page 2 of their playbook:

The concept of “election night,” is no longer accurate and indeed is dangerous. We face a period of contestation stretching from the first day a ballot is cast in mid-September until January 20. The winner may not, and we assess likely will not, be known on “election night” as officials count mail-in ballots. This period of uncertainty provides opportunities for an unscrupulous candidate to cast doubt on the legitimacy of the process and to set up an unprecedented assault on the outcome. Campaigns, parties, the press and the public must be educated to adjust expectations starting immediately.

This is a talking point that has been repeated in recent days by Democrats, the media, and establishment organizations.

Hawkfish, a political data and technology-based agency founded by Michael Bloomberg last year to support “Democratic candidates, good causes, and common sense solutions,” recently asserted that the election will likely see a “red mirage” in which President Trump wins the race by a landslide on election night, but Joe Biden wins days later after mail-in votes are counted.

In order to keep citizens, including the president, from declaring a Trump victory “prematurely,” the Transition Integrity Project says “Social media platforms should also elevate trustworthy officials and accurate information, remove lies and disinformation, and refuse to give voice to those provoking or organizing violent action.”

Facebook is already working on that. CEO Mark Zuckerbeg announced that Facebook will suppress anyone claiming victory on election day, such as President Trump and his supporters. The platform will also lift political ads a week before the election.

The Transition Integrity Project goes on to state that an election dispute will require progressives to take to the streets — for a long time, if need be:

If there is a crisis, almost every strategy to protect the democratic process is dependent on mass mobilization, and in particular, on people taking peacefully to the streets in large numbers, potentially for an extended period. Large, base-building groups on the progressive side will need to anchor this strategy, but their success will likely depend on supporting and resourcing new and emerging racial justice leaders, many of whom are not affiliated with formal institutions and coalitions.

The group may claim such “protesters” would be doing nothing more than demonstrating “peacefully.” But when the media regularly refers to rioters burning down buildings and looting businesses as “peaceful protesters,” we can be sure about what the Transition Integrity Project is really calling for.

It should also be noted that they say success in preventing President Trump from being declared the winner will “depend on supporting and resourcing new and emerging racial justice leaders,” which should give Americans a better idea of what the Black Lives Matter is really about — it’s a way of building up an army of foot soldiers who can be deployed to cause mayhem on Election Night.

Americans should brace themselves: This election is poised to be the most divisive in the nation’s history.