FLASHBACK: Five years ago Obama’s EPA blew out the Gold King Mine then betrayed the Navajo Nation 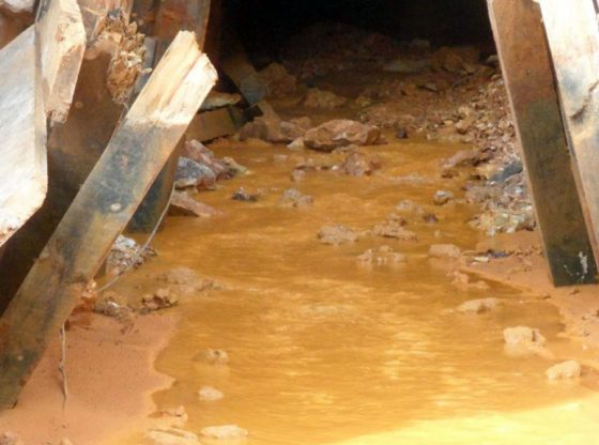 FLASHBACK: Five years ago Obama’s EPA blew out the Gold King Mine then betrayed the Navajo Nation

…the Navajo Nation had its own share of frustrations with the federal response to the incident. According to Nation Attorney General Ethel Branch, “The impact has been devastating to our culture and economy, as well as to the peace of mind of our people. With unknown amounts of fine sediment in our water we now face the risk of reliving this nightmare with every major increased water flow event affecting the river.”

The Navajo Nation and New Mexico vs. incompetence and bad faith in the US EPA

On August 5, five years to the day after suffering from a 3-million-gallon spill of heavy-metal-laden toxic wastewater from Colorado’s Gold King Mine, the State of Utah announced a settlement of its claims against the U.S. Environmental Protection Agency and several EPA contractors (who thus far have not been held responsible, accountable or liable) for their alleged negligence in allowing the spill.

The notorious, devastating accident turned Cement Creek and the Animas, San Juan and Colorado Rivers yellow all the way from Colorado through New Mexico and Utah and into Lake Powell. The settlement is good news. Yet those whose memories of are faulty at best may not realize that the EPA is still in the throes of a consolidated lawsuit filed by the State of New Mexico, the Navajo Nation, and a group of 295 Navajo farmers and ranchers (and 16 other individuals) who were harmed by the spill.

Indeed, the Obama Administration made it very clear early on that neither the EPA nor the Federal Emergency Management Agency would provide just compensation for the damages caused by the incident, in which an EPA contractor using a backhoe to dig away rock and debris from the adit (mine portal or entrance) opened the floodgates. The spill happened because no one had done any testing to determine the height, volume or quality of water inside the mine.

While the Navajo Nation hired the California law firm Hueston Hennigan almost immediately after the incident to represent its interests, the State of New Mexico on May 23, 2016, was the first to formally file a lawsuit seeking to recover damages from the EPA and its contractors.

New Mexico Environment Secretary Ryan Flynn explained, “We tried over seven months to pursue a diplomatic path forward,” but the EPA refused to accept any responsibility for the spill and its aftermath. Flynn estimated that New Mexico would lose $130 million in income, taxes, fees and revenues because of lost tourism, fishing and land use.

The New Mexico lawsuit also named Obama era EPA Administrator Gina McCarthy, Environmental Restoration, Kinross Gold Corp., Kinross Gold USA Inc. and Sunnyside Gold Corp as defendants and responsible parties. Another major reason for the lawsuit was that New Mexico and the EPA had been unable to “mutually agree” on a monitoring plan that “appropriately protects” state and tribal lands.

At the time, EPA Region 6 spokesperson David Gray asserted that his agency did take responsibility for the cleanup and was working to reimburse response costs and provide funding for observing monitoring plans developed by the state and tribe. His words held no sway and were not backed up by action.

Meanwhile, the Navajo Nation had its own share of frustrations with the federal response to the incident. According to Nation Attorney General Ethel Branch, “The impact has been devastating to our culture and economy, as well as to the peace of mind of our people. With unknown amounts of fine sediment in our water we now face the risk of reliving this nightmare with every major increased water flow event affecting the river.”

The Nation filed its lawsuit on August 16, 2016 – noting that Navajo farmers had had to abandon large portions of their fields in the hopes of salvaging limited plots, and livestock had become dehydrated due to the lack of water that also dried up corn crops.

In filing the lawsuit, Navajo Nation President Russell Begaye complained that the tribe had to fight for even the tiny $1.1 million in compensation provided from the EPA – which came only after the tribe threatened legal action. “EPA, we’re holding your feet to the fire. We will not let you get away with this. We will be here,” Begaye asserted.

Then in August 2017, the EPA reversed Region 6 Administrator Gray’s admission of responsibility. In February 2018, however, U.S. District Judge M. Christina Armijo opted to leave the now-consolidated lawsuit intact. Two years later, on July 26, 2018, the EPA again asked a federal judge to dismiss the case [and the Utah case], claiming that crews were already working on the cleanup.

In their filing, the EPA’s attorneys claimed that “Granting any relief in New Mexico, within the Navajo Nation, or in Utah would conflict and interfere with EPA’s exclusive jurisdiction over its on-going response action activities and cleanup remedies.” [emphasis added] How paying reparations or assisting private, state and tribal cleanup would “interfere with” agency jurisdiction was never explained.

A month later, EPA was hit with yet another lawsuit, this one filed on behalf of 295 Navajo farmers and ranchers from New Mexico. Attorney Kate Ferlic argued that these farmers and ranchers had lost crops and livestock and had to pay to haul clean water because they could no longer use water from rivers that were still polluted with heavy metals and other dangerous chemicals.

U.S. District Judge William P. Johnson immediately rolled the farmers and ranchers suit into the Navajo and New Mexico (and Utah) suits (there was also a suit involving a small number of New Mexico citizens). Once again the EPA sought to have the reconsolidated lawsuit thrown out. But on February 28, 2019, Judge Johnson denied the EPA’s latest ploy.

As of this writing, while Utah has settled with the EPA and withdrawn from the consolidated lawsuit, the other claimants – New Mexico, Navajo Nation and two groups of citizens – are still awaiting compensation for the damages caused by the EPA’s alleged negligence in 2015.

Five years have passed, and the Navajo in particular are still hurting even as they also battle the health, economic and unemployment consequences of the COVID 19 pandemic and forced shutdown of the tribe’s coal mine and coal-fired power plant. Compounding these problems, restrictions on travel and in-person interviews have slowed the ongoing discovery process such that the projected trial date has been pushed back to fall 2021, further postponing any compensation.

While the Utah settlement may provide some hope for a pretrial resolution of the New Mexico and Navajo (and farmer and rancher) cases, hard-liner positions taken over the past five years by the EPA – and the plaintiffs’ determination to finally win some meaningful relief – suggest that, barring some pre-election-day “miracle,” this consolidated case could easily drag on for years.

Duggan Flanakin is director of policy research for the Committee For A Constructive Tomorrow (www.CFACT.org)