Does the Militarization of Police Cause More Violence? 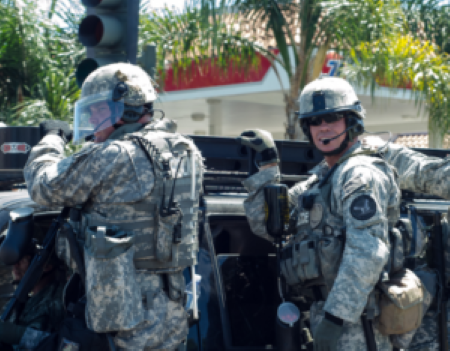 Does the Militarization of Police Cause More Violence?

An article published in the East Tennessean, the student-run newspaper of East Tennessee University in Johnson City, Tenn., displays the headline “Police Militarization Leads to Violence Against the Marginalized.”

At first glance, this headline seems rather leftist, as anything to do with the marginalized – a person, group, or concept treated as insignificant or peripheral – is often part of a Leftist agenda. But, the writer has some good points. At the beginning of his article, he writes:

Authoritarians create imagined threats out of people not like “us” to justify the surveillance and militarization of minority communities. The creation of the “other” prevents us from recognizing the commonalities of our experiences. It obscures class interests and sows division among marginalized people.

This is correct. Authoritarians – aka Totalitarians, Socialists, Marxists — have done this. We saw it during the riots in Ferguson and Charlotte, and really any place that Black Lives Matters or Antifa just “happen” to show up. If you’ve followed this blog or The New American for the past few years, you know that there is no such thing as a spontaneous riot; these groups know exactly when and where to show up and they do so with hundreds of pre-printed signs to hand out.

Where the author is wrong is when he insinuates that it’s the police that are to blame. He says: We need to end this country’s blind adoration for law enforcement.

There are undoubtedly police officers who are nice, as many people will point out when you wage even the mildest critique against police, but that does not change that they are active participants in a system of immense violence against marginalized people, particularly black people and immigrants.

While this author seems to mean well, it would be to the benefit of himself and his readers if he dug a little deeper on this topic in order to discover that the police are more “puppets” than “active participants” in the system. If you read the Seven Steps to Nationalization, you will see that chaos is deliberately created by those that desire power. Those people then present the “solution” to the problem via militarized police and/or legislation. This was done during the riots in Charlotte: The National Guard was called in when the local police couldn’t handle the situation. What many people don’t know is that the local police were ordered to stand down by their mayor, which led to the situation getting out of control. When people see the guard being called in to handle problems in their community, they get the impression that their police force must not be able to handle the problems – therefore they need better equipment – and this typically comes in the form of Bearcats, SWAT gear, etc.

Almost any police officer will tell you that if the government (their city government and on up) would let them do their job, there would be less problems, less crime, etc. When we say this, we don’t mean we want to let officers do whatever they want (i.e. abuse of force). The Department of Justice has its claws in deep into local law enforcement in the form of grants and programs. Both are in the name of “safety,” but they always come with strings attached. Take for example the Consent Decree in Chicago. The stated purpose of the Decree was to make police officers more accountable; they were mandated to write down every single thing they did while on duty. What was the result? The officers stopped doing their job. They chose to not go into parts of the city that were predominantly black for fear of being accused of being racist or abusive and losing their job. The end result was an increase in crime in Chicago.

As you can see, there is much more to the story that just law enforcement. The author is correct when he says:

Militarizing the police is another step in America’s move toward authoritarianism. We have too much faith in institutions designed to oppress the masses. The police are too heavily militarized.

The militarization of police is simply one part of the Socialists/Marxists’ plan to take over our nation, and they are accomplishing this by creating chaos and dividing us. We are no longer just Americans; Everyone has a label according to their skin color, gender identity and mental state, and we all have to be careful of what we say and how we say it for fear of offending someone else and our life being dissected and destroyed on the front page of the mainstream media networks.

Published with Permission of lecf-inc.org