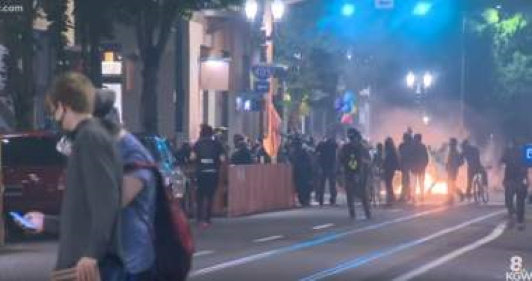 September began with another night of rioting in the People’s Republic of Portland, with Antifa/Black Lives Matter mobs surging into Mayor Ted Wheeler’s upscale Pearl District neighborhood, smashing windows, lighting fireworks, scrawling graffiti, and starting a blaze near his condo complex. August 31 was the mayor’s birthday, and the rioters said they had come to wish him an “unhappy birthday” and to demand that he resign.

The rioters are angry that Mayor Ted has turned against them. Like other “woke” leftist pols, Wheeler had embraced them as “peaceful protesters” and had joined them in denouncing the police following the Memorial Day death of George Floyd.

As the days of rioting, looting, arson, and mayhem stretched into weeks and months, however, even die-hard liberal-leftists could begin to see that the once-beautiful “City of Roses” is being turned into a smoldering trash heap where law-abiding citizens fear to tread.

Wheeler, known as “the Antifa mayor,” turned against his comrades when he finally realized that their anarchy is alienating all sensible voters and destroying his own political future. On August 6, after rioters had blocked exits and started a fire at the Portland Police Bureau’s East Precinct building, Wheeler condemned the rioters for “attempting to commit murder.”

“When you commit arson with an acellerant in an attempt to burn down a building that is occupied by people who you have intentionally trapped inside, you are not demonstrating, you are attempting to commit murder,” he said in an August 6 press briefing.

As if awakening from a Rip Van Winkle snorefest, Mayor Wheeler ended days of silence with a video press statement on August 26 calling on Portlanders to “rise up” against the rioters. “We have allowed our proud tradition of progressive protests to be stolen by a few dozen individuals engaged in violence and criminal destruction,” Wheeler said. “That’s a line we can’t allow our community to cross. Not anymore. Enough is enough. It’s time to rise up and take immediate steps to repair and beautify our city. But I need the help of the entire community.”

Enough is enough? Rise up? That is rich, coming from the politician who forced the police to stand down while his “progressive” Antifa/BLM comrades ravaged the city, endangered public safety, and trampled the rights of its citizens.

In June, Mayor Wheeler adopted the Antifa/BLM “defund the police” demands, pledging to divert $12 million from the Portland Police Bureau (PPB) and other city departments to directly support “communities of color.”
The mayor also made the obligatory politically correct apology for “systemic institutional racism” and “white supremacy” in the city and apologized for his “white privilege.”

“My privilege as a white man, my privilege as the mayor and the leader of the institutions of power in this community I believe shielded me from time to time from the many difficult and uncomfortable truths about our history and about our society,” he said.

As the rioting and the demands of the rioters continued to escalate, Mayor Wheeler and liberal-left Democrat Oregon Governor Kate Brown repeatedly rejected offers of assistance from President Donald Trump with inflammatory rhetoric that egged on rioters who were attacking federal officers and federal buildings in Portland.

Regular violent street crime in Portland has also escalated, as might be expected during a time of chaos when police resources are strained and diverted. “There were 99 shootings in Portland in July, compared to 35 during the same month last year,” Portland’s KPTV 12 reported on August 6. “During all of 2019 there were 388 shootings in Portland. This year there have already been 366,” the KPTV report noted.

Antifa activist Michael Forest Reinoehl, 48, has been arrested and accused of fatally shooting Trump supporter Aaron “Jay” Danielson, in a cold-blooded murder that occurred in Portland on August 29. In the wake of the Danielson murder, Wheeler blamed President Trump for the ongoing violence.

During the night of August 31-September 1, the riotous violence he had encouraged came to the mayor’s doorstep. A report by the Portland Police Bureau (PPB) states that rioters began with a march at about 10 p.m. that included breaking windows, lighting illegal fireworks, defacing property, and other vandalism.

“At 11:05p.m., due to the ongoing criminal behavior, the incident was declared an unlawful assembly and all persons were told over loudspeaker to immediately leave the area by traveling to the west,” the police report states. “About 2 minutes later, officers observed someone throw burning material through a broken window into a ground-level business in a large, occupied apartment building. Out of concern that the fire could spread, causing an extreme life safety concern, the incident was declared a riot,” the report continued.

As usual, the best coverage of the Portland mayhem comes from independent journalist Andy Ngo, who has continued to brave the violent mobs to provide eyewitness video Twitter feeds of the Antifa-BLM violence.

One of the graffiti messages Ngo films from the recent riots is this one: “How much does it take to show you we are serious?”

Sheriffs, Chiefs of Police Refuse to Save Dems’ Political Bacon

Following the murder of Jay Danielson and the continuing onslaught of violence, Governor Brown announced a plan to surge county sheriff deputies, as well as officers from suburban police departments and the Oregon State Police, into lawless Portland. One major problem: She neglected to consult the sheriffs and chiefs of police before attempting to commandeer their deputies to undo the damage of her own policies.

At least two of the sheriffs she had planned to use in this gambit publicly refused to participate, except indirectly by covering for state troopers that are diverted to Portland. The Oregon Association of Chiefs of Police and the sheriffs are unwilling to send their officers and deputies into an environment where the political leaders are anti-police, the district attorney refuses to prosecute the rioters, and the judges turn the rioters loose in a self-defeating catch-and-release policy that perpetuates a cycle of violence.

“Had Governor Brown discussed her plan with my office, I would have told her it’s about changing policy not adding resources,” Sheriff Roberts continued. “Increasing law enforcement resources in Portland will not solve the nightly violence and now, murder. The only way to make Portland safe again, is to support a policy that holds offenders accountable for their destruction and violence. That will require the DA to charge offenders appropriately and a decision by the Multnomah County Presiding Judge not to allow offenders released on their own recognizance, and instead require bail with conditions. The same offenders are arrested night after night, only to be released by the court and not charged with a crime by the DA’s Office. The next night they are back at it, endangering the lives of law enforcement and the community all over again.”

“For all of us in law enforcement, keeping our community safe is our first priority,” Sheriff Roberts avowed. “Had Governor Brown asked me, I would have told her that no amount of human resources will stop the ‘cycle of violence’ (her term) that is making Portland unsafe. For that to occur, the criminal justice system will need do its part and hold offenders accountable.”

Washington County Sheriff Pat Garrett similarly rebuffed Governor Brown’s requested participation, stating, in part, “At this time, I do not plan to send deputies to work directly in Portland. PPB is a terrific partner and I am very sympathetic to what they are enduring. However, the lack of political support for public safety, the uncertain legal landscape, the current volatility combined with intense scrutiny on use of force presents an unacceptable risk if deputies were deployed directly.”

The Oregon Association Chiefs of Police, likewise, declined to step into Portland’s progressive cesspool, stating, “Over the weekend, members of our associations were approached to assist with policing in the City of Portland. Unfortunately, due to the lack of support for public safety operations, the associated liability to agencies who would be assisting in Portland and the lack of accountability for those arrested committing criminal acts, we cannot dedicate our limited resources away from the communities we serve.”

With eyes to the November elections that are fast approaching, Wheeler, Brown, Biden, Pelosi, and company are now trying mightily to shift blame and to divert attention from the calamitous results of their toxic policies. The Antifa/BLM rioters whom they viewed as allies against President Trump have turned into a gargantuan liability for them. The rioting is on them. They own it.