Rebuttal to Brad Little’s Disgusting Statement After the Special Session

Rebuttal to Brad Little’s Disgusting Statement After the Special Session

Governor Brad Little has proven once again, to not only be DISGRACEFUL, but disgusting, as well. Just yesterday, he issued a statement regarding the special session that just ended. Here on this page, we provide a rebuttal to every portion of his ridiculous comments (Brad’s comments in communist red):

“I want to thank the members of the Idaho Legislature for passionately carrying out their duties and performing this special legislative session. Our common desire for a prosperous and safe Idaho is our bond. Your work has helped ensure our election will be safe and secure and that businesses, schools, and churches responsibly operating during the pandemic are protected. I remain committed to working with you as we get through this very challenging time in our history and emerge stronger than ever.”

What is this nonsensical drivel? First of all, the good news is that the bill that Brad tried to ram down our throats, also referred to as the IACI bill (because it was IACI who wrote the bill and basically ordered the Governor to get it passed in a special session), was killed! Thank God for that!

The bill that did pass was nothing more than a concession by the Legislature to allow Governor Little to save some face so that it would appear that the special session was not in vain. The bill that was passed, H1 (click here to download it), does absolutely nothing. It provides immunity for an issue that could never be prosecuted anyway. And even then, it ends in July 2021. It is the equivalent of passing a law that says, “If you get sunburned, the business or homeowner where you were when you think you got sunburned cannot be held liable for the damages you incurred from the sunburn. This law is valid until July 2021.”

How stupid and meaningless is a law like that? Well that’s basically the bill that got passed, but referencing the coronavirus, instead of sunburning. But the Governor is now touting the bill as a huge success, because he doesn’t want to look like an idiot.

The truth is that the people STOPPED IACI and the people STOPPED THIS DISGRACEFUL Governor from passing the bill that they wanted to get passed, which would have provided immunity for both the Governor and all corrupt businesses from civil liability for the destructive acts they’ve executed against Idaho citizens. It would have also provided immunity for hospitals and medical organizations who would forcefully deliver covid vaccines in the future.

The Governor lost big time here—yet he’s trying to claim it as a success for himself and his cronies. This just shows how phony and disgraceful he is. 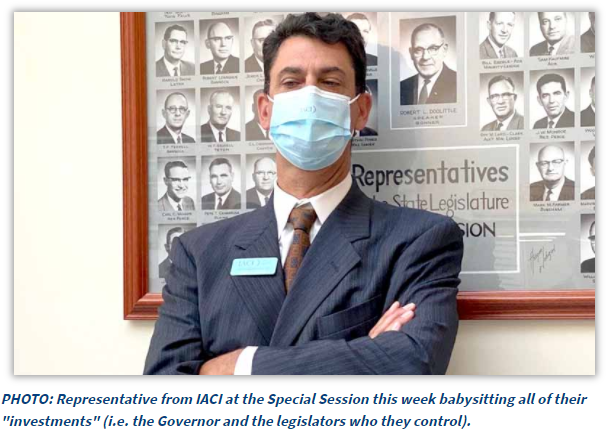 “To the citizens who came to the Capitol and exercised your First Amendment rights peacefully – thank you. You far outnumbered the individuals who infringed on an orderly proceeding. We will always outnumber the agitators who seek to stifle civil debate and harm our democratic republic.”

Where do we even start with this one? First of all, we do not have a “democratic republic.” Perhaps Little misspoke, as he is prone to Biden-style gaffes, but more than likely, he just doesn’t know. He has already proven that he is particularly ignorant about Constitutional matters.

As the Governor of one of the “United States of America,” he is bound by an oath and by the plain declaration of the United States Constitution in Article 4, Section 4, to ensure that the State of Idaho be a Republican form of government. Not a “democratic republic.”

US Constitution Article 4, Section 4: “The United States shall guarantee to every State in this Union a Republican Form of Government…”

Now more importantly, Brad’s attempt to side himself with the “peaceful” exercisers of their first amendment rights while chastising the “individuals who infringed on an orderly proceeding” who he calls “agitators” is purely disingenuous, completely dishonest, and wholly duplicitous.

Brad is trying to make it appear as though there were two groups of people who came to the Capitol this week—one, a peaceful group of citizens who supported him, their government, and the “process”—and who allowed government officials to “do their job” without problem and who, he is inferring, were siding with him and the Idaho State Legislature. And that these people should be applauded and thanked. And two, a second group of violent “agitators” who came to disrupt these otherwise “orderly proceedings.” These people, as he is inferring, are nothing but troublemakers. But don’t worry, “we” he says, will always outnumber “the agitators.”

What a disgusting deceiver Brad Little is! Hey Brad, don’t you know that EVERY ONE who came to the Capitol this week from the ranks of the citizenry of Idaho came to oppose you?! Everyone at the Capitol, with the exception of your cronies and your bed buddies who make their money off of Government, were there to voice their opposition to your disgusting attempt to enact legislation that would harm them!

People came from all over Idaho, from all walks of life, with different backgrounds, religious beliefs, and every other type of difference imaginable—all being united by this one very thing—THEY WERE ALL OPPOSING YOU!

Everyone at the Capitol was opposing you, Brad. There was no difference between the peaceful and the agitators amongst the citizenry. There was only one group of citizens—people opposing Brad Little. That was it.

And the only true agitators were the corrupt and disgusting police officers who were complicit in violating the peoples’ rights and breaking Idaho State Law because you ordered them to do so.

Nice try, Brad—but unlike your cronies and your followers, the people of Idaho are not stupid!

“To the men and women of the Idaho State Police, Boise Police Department, and Capitol security – you served with honor under extremely challenging circumstances. You put your own health and safety on the line, and you acted appropriately to deescalate volatile situations to ensure the important business of the Legislature could move forward.”

This is the most deceitful and dishonest claim of them all. Law enforcement in the Capitol this week demonstrated themselves to be the worst type of law enforcement anywhere—unworthy of any honor or respect. Many of them acted criminally and should be immediately removed from office and thrown in jail.

They were the abusive and violent agitators who broke the law multiple times and violated peoples’ rights. They did NOTHING to de-escalate and everything to MAGNIFY and ESCALATE the tension in the building—including arresting innocent people. But I’ll let you be the judge. Watch this video of this abusive and violent Idaho State Police Officer grabbing this innocent woman by the neck and throwing her into the Lincoln Auditorium so he could arrest her, and then you tell me if the Governor is being honest when he says that these police officers served with “honor” and “acted appropriately to “deescalate volatile situations…”: 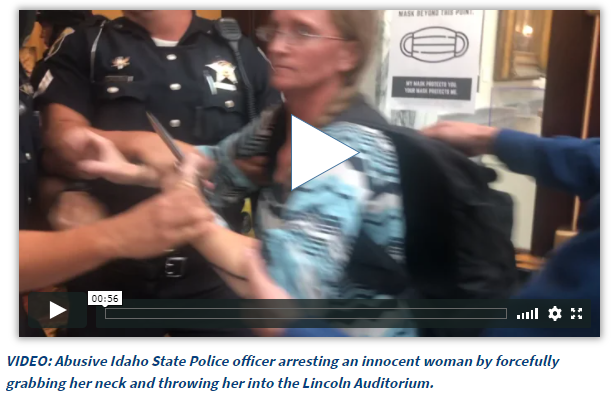 “And to the people of Idaho – as your Governor, I will continue to do everything I can to protect your health and safety during the pandemic and propel our economic rebound forward. Thank you for the care and concern you have shown your neighbors over the past six months and for your love of Idaho and enthusiasm to make our state even greater. God bless Idaho and this country we love.”

Yo Brad, Idaho ain’t buying it. You’re a disgusting disgrace and the people of Idaho are going to run you out of office and hopefully out of the state of Idaho FOREVER, because you don’t even deserve to live here.