GLOBAL POVERTY ACT IS BACK… IS BILL GATES THE WORLD’S RICHEST USEFUL IDIOT? 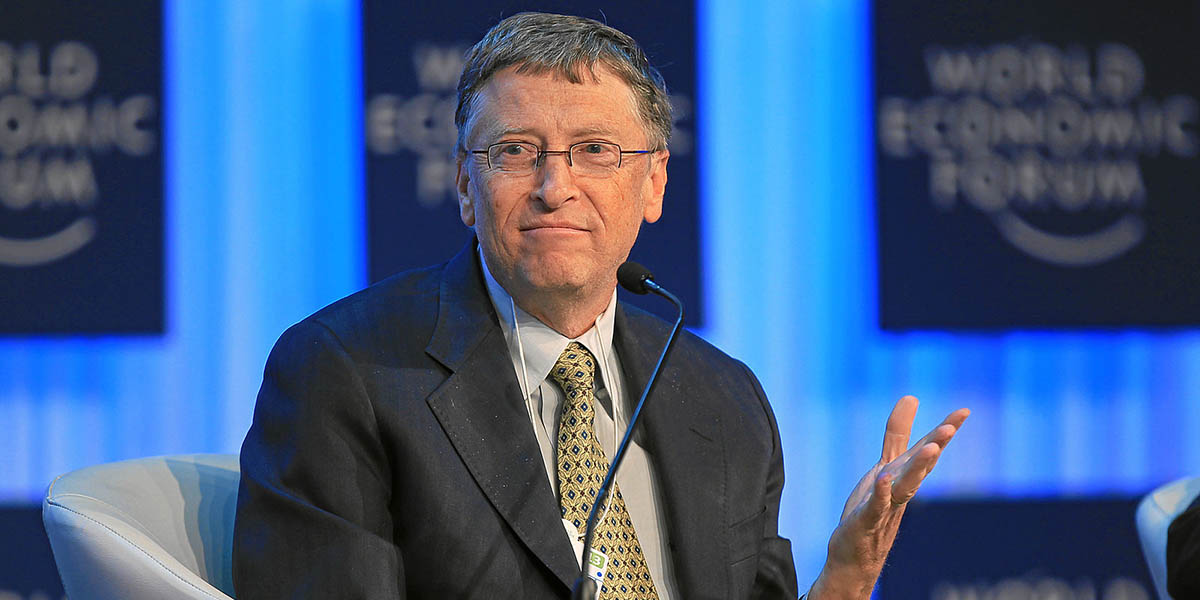 GLOBAL POVERTY ACT IS BACK… IS BILL GATES THE WORLD’S RICHEST USEFUL IDIOT?

I wrote this article and published it in the DeWeese Report back in January of 2012. Now we see the full Bill Gates agenda for changing the structure and culture of the civilized, free world. But here’s some insight on how he got started down that path, and where the ideas originally came from. Considering the source of that agenda and its announced drive to reduce world populations, I would be very wary about letting anyone put a Gates-created needle in my arm. – Tom DeWeese

He might be a whiz kid at creating computer software, but beyond that Bill Gates has proven time and again that he hasn’t a clue about why or how freedom works.

He constantly teams up with anti-free market types like the National Wildlife Federation (NWF) to produce “educational programs” in his software packages, misdirecting unsuspecting children with political propaganda. In 2002 he gave the NWF $600,000 worth of software to help these environmental radicals run their programs to block the drilling of American oil. Apparently Gates doesn’t understand that he needs oil to create power to run computers. Most recently his Bill and Melinda Gates Foundation donated $3 million to eight universities to reinvent the flush toilet. Environmentalists call that device “one of the world’s most destructive habits.”

Clearly Gates is a captive of his own wealth, suffering the usual rich man’s guilt over being rich – rushing full speed ahead to “give back to the world.” Funny how such giving back always seems to mean supporting socialist causes with money gained from the free market. Up till now, Gates has just been giving his own money voluntarily. Even if it’s to bad causes, he is certainly free to use his money anyway he chooses.

Now, however, his misguided meddling is about to involve the misdirecting of everyone’s income, and so the world’s richest useful idiot just became dangerous to freedom.

In November, as part of the G20 summit, Gates, representing his foundation, presented a report on a plan to eradicate world poverty. Said Gates, “I am honored to have been given this important opportunity. My report will address the financing needed to achieve maximum progress on the Millennium Development Goals, and to make faster progress on development over the next decade.”  Gate’s report proposes a financial transaction tax (FTT) on tobacco, aviation, fuel and carbon (energy), to be enforced by all members of the G20 nations. The financial transaction tax has been excitedly talked about in the halls of the UN for a decade. Called the Tobin Tax, named after a Yale economist who dreamed it up, FTT would give the UN almost unlimited funding by taxing every stock and monetary transaction in the world.

Gates didn’t just dream this up on his own accord. He is actually resurrecting legislation a bill introduced in 2008 by then Senator Barack Obama. It was called the Global Poverty Act. Obama introduced the bill during his one abbreviated term in the U.S. Senate.

The bill was one of the only pieces of legislation ever introduced by Senator Barack Obama, and it wasn’t just a compassionate bit of fluff that Obama dreamed up to help the poor of the world. This bill was directly tied to the United Nations and served as little more than a shake down of American taxpayers in a massive wealth redistribution scheme.  The Global Poverty Act would provide the United Nations with 0.7% of the United States gross national product. Estimates indicated that would add up to at least $845 billion of taxpayer money into UN coffers, to be spent (or wasted) by UN bureaucrats. The excuse for the taxing, of course, is to help end poverty in third world countries. The bill died in Congress in 2008 after passing unanimously in the House. Now Bill Gates has resurrected it.

Of course the United States has had an ongoing program of supplying billions of dollars in foreign aid and assistance to the poor for decades. In addition, the U.S. pays most of the bills at the UN for its many unworkable poverty programs. So what’s new about the Global Poverty Act, and why is it dangerous?

First, some history that led up to the Global Poverty Act. In 1999 and 2000 non-governmental organizations, NGOs held numerous meetings around the world to write what became known as the Charter for Global Democracy. The document was prepared as a blue print for achieving global governance. In reality it was a charter for the abolition of individual freedom, national sovereignty and limited government.

The Charter for Global Democracy outlined its goals in 12 detailed “principles:”

Specifically, the Charter for Global Democracy was intended to give the UN domain over all of the earth’s land, air and seas. In addition it would give the UN the power to control all natural resources, wild life, and energy sources, even radio waves. Such control would allow the UN to place taxes on everything from development; to fishing; to air travel; to shipping. Anything that could be defined as using the earth’s resources would be subject to UN use-taxes. Coincidentally, all twelve principles came directly from the UN’s Commission on Global Governance.

There was one major problem with the Charter for Global Democracy, at least as far as the UN was concerned. It was too honest and straightforward. Overt action displeases the high-order thinking skills of UN diplomats. The UN likes to keep things fuzzy and gray so as not to scare off the natives. That way there is less chance of screaming headlines of a pending takeover by the UN. So, by the time the UN’s Millennium Summit rolled around in September 2000, things weren’t quite so clear.

At the Summit, attended by literally every head of state and world leader, including then-president Bill Clinton, the name of the Charter had been changed to the Millennium Declaration and the language had been toned down to sound more like suggestions and ideas. Then those “suggestions” were put together in the “Millennium Declaration” in the name of all of the heads of state. No vote or debate was allowed — just acclamation by world leaders who basically said nothing. And the deed was done. The UN had its marching orders for the new Millennium.

Yes, these are sneaky guys, well trained in the art of saying nothing. Who could oppose such noble goals? The Millennium Project, which was set up to achieve the “goals” says on its website that it intends to “end poverty by 2015.” A noble goal, indeed. So what happened to the 12 Charter principles? Take a hard look – they are all still there.

Principles One, Two, and Twelve are right there in Goal 8 – to develop a global partnership for development. Now almost every world organization such as the World Bank carries a section on their web sites calling for “Millennium Development Goals” which control international banking and loan policy. They set policy goals for each country and sometimes communities to measure if nations are keeping their promise to implement the Millennium goals.

Principle Seven is clearly Goal 3, the only way to assure Gender Equality is to enforce compliance with UN Human Rights treaties. Principle Eight has already been achieved.  Principle Nine is Goal 7. Al Gore is doing his best to enforce Principle Eleven. Global Warming, no matter how well the theory is debunked, just won’t go away because it is one of the Millennium Goals.

And then there is Barack Obama’s Global Poverty Act. Can you see which Principle that is? Of course, Principle 12 and Goal 1. Obama’s 2008 bill specifically mentioned the Millennium Goals as its guide and the 0.7% of GNP is right out of UN documents. In order to eradicate poverty by 2015, they say, every industrial nation must pony up 0.7% of their GNP to the UN for use in eradicating poverty.

The UN is now becoming an international collection agency, pressing to collect the promises the world leaders made at the Millennium Summit. The UN wants the cash. In 2005 former UN Secretary General Kofi Annan said, “Developed countries that have not already done so should establish timetables to achieve the 0.7% target of gross national income for official development assistance by no later than 2015…”

At the Summit in 2000, the UN set clear goals to establish its power over sovereign nations and to enforce the greatest redistribution of wealth scheme ever perpetrated on the world. Now it has the Criminal Court; Sustainable Development (Agenda 21) is fast becoming official policy in every corner of the nation—only today we call it “going green;” and there is a full court press on to enforce Global Warming policy, in spite of the fact that there is now overwhelming evidence pouring out of the scientific community to fully debunk the scam.

Obama introduced the Global Poverty Act as he campaigned for the Presidency with the obvious and clear intention of showcasing the then little known Senator as a world leader. But the bill died in the Senate. Now, Bill Gates is proving his “useful idiot” status (a term coined by Lenin to describe capitalists who would sell the rope to hang capitalism), by serving as Obama’s lackey to resurrect the Global Poverty Act.

And right on cue, just after Bill Gates made his report to the G20 Summit calling for a financial transaction tax, Senator Tom Harkin (D-Iowa) and Representative Peter DeFazio (D-Oregon) introduced legislation to put a tax on “certain trading activities undertaken by banking and financial firms.” The bills, of course, are the Tobin Tax and in line with Gate’s report.

Clearly, Obama needed to show that, under his leadership, the United States is falling in line with the Millennium Declaration and its 2015 deadline for implementation.  Truth, science, and American taxpayer interests be hanged, as Bill Gates offered the rope, Harkin and DeFazio provided the knot, and Obama got to pretend to be a “world” leader.