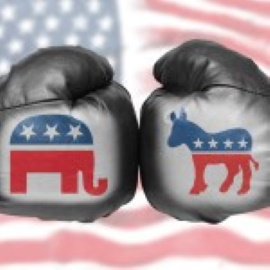 The DNC’s four-day snoozefest gave us a pretty good preview of what to expect over the next two-and-a-half months — lying, lying, and more lying.  No surprise there.  Neither was the fake patriotism the shameless Dems put on display.

Having spent the past several years praising China, Black Lives Matter, Planned Parenthood, and “peaceful protesters” looting and burning down cities, while at the same time calling for defunding the police, open borders, packing the Supreme Court, weakening the Second Amendment, destroying the “white supremacy” bogeyman, healthcare for illegal aliens, and race reparations — all while raising taxes — Democrats thought they could hoodwink the public into believing they are really patriots at heart.

You knew it was going to be a bad four nights for Democrats when the highlight of the first session was Mad Mamma Obama’s three-week old, pre-recorded speech.  Notwithstanding the slobbering praise from Fox News lefties like Chris Wallace and Dana Perino, Michelle Obama’s malevolence was breathtaking.  She might be the only woman on the planet who can make Elizabeth Warren seem like Mary Poppins by comparison.  Dana Perino went so far as to say that “When you talk about authenticity, she has it in spades.”  It was enough to bring Chris Wallace to the verge of tears.

Sorry, Dana, but nothing about Michelle Obama is authentic.  She is a creature created by the mainstream media, which depicts her as a kind, compassionate, gracious woman.  She is, in fact, an angry, disgruntled, hateful woman, and a person would have to be trapped in Democratic Gagaland not to recognize it.

After Mrs. Obama’s embarrassing performance, it was all downhill for the Dems.  Barack was, of course, his usual snarky, lying self.  Sensing that his media-created “legacy” was on its last legs, he took the mask off and tried to outdo his beloved wife with his vicious remarks.  His angry tone brought back fond memories of his infamous threat, “If they bring a knife, we bring a gun.”  His hate-drenched words worked extremely well — for Trump, that is, as has been reflected in the Rasmussen daily presidential tracking poll.

Then there was the newly minted Kamala Harris, whom the compliant MSM now describes as a “moderate.”  I always get suckered into believing that Democrats can’t outdo their last mega-dumb move, but they once again proved me wrong by anointing Kamala to be Sleepy Joe’s running mate.  Granted, the other women who were purportedly under consideration were flawed beyond spin, but Kamala’s baggage could fill an LAX conveyor belt.

Like Susan Rice and Elizabeth Warren, Kamala is a congenital liar who specializes in 180-degree whoppers, constantly saying the exact opposite of what is true.  But when it comes to being a genuinely vile human being, Kamala towers over the competition.  Even Democrat voters couldn’t stomach her in the primaries, especially after lightweight Tulsi Gabbard fact-checked her into oblivion.  And after her cringeworthy speech at the DNC, it’s not hard to understand why she wilted so quickly under pressure.  Her attempt to come across as someone other than who she really is only reinforced who she really is:  a fraud.

Finally, when the last day of the DNC mercifully arrived, the man whom Michelle Obama described in her speech as “a profoundly decent man guided by faith” (which brought back memories of her calling Harvey Weinstein a “wonderful human being”) got the opportunity to show his stuff.  And, lo and behold, he read his 22-minute teleprompter speech almost flawlessly — so flawlessly that a cynic might suspect that it was prerecorded and heavily edited.

What Sleepy did not talk about, however, is why he, a supposedly devout Roman Catholic, supports abortion, or why he doesn’t believe China is a threat to the United States, or why he believes that police are the enemy of the people.  I guess he’ll address those subjects at his next major basement rally.

Everyone in the Fake News Media — especially Chris Wallace — was wildly excited that Sleepy Joe could read from a teleprompter for more than 20 minutes without a major stumble.  In fact, the thrill up Wallace’s leg was so intense that he forgot to mention that Biden’s speech did not contain a single substantive statement or policy item and that it was saturated with lies, including the oft-disproven Charlottesville lie that Democrats refuse to stop using.

The problem is that even if Sleepy performed his speech live, he still has to answer questions from the media and face Donald Trump in one-on-one debates.  He should be able to stumble his way through a handful of softball interviews with the Fake News Media, and his handlers will try to do everything possible to avoid debates altogether.  But if his poll numbers continue to slide, they may have no choice but to let him out of the basement and just pray to Satan that he will not be devoured by the big, bad orange carnivore.

Now that the DNC nightmare is finally over, the media is breathlessly speculating about whether or not it will produce results.  I can say with certainty that the answer is yes, because lies have consequences, and starting tonight at the RNC, the Dirty Dems will be gnashing their teeth while watching Republicans expose their lies.  It will be ugly, to be sure, but also lots of fun.

Looking ahead, if Trump is reelected, the question is, what will happen to the Democratic psychopaths when they snap out of their election-night hysteria and realize that the dregs of society have once again propelled Donald Trump to victory?  Will they have finally learned their lesson and come to grips with the realization that they have no choice but to focus on the needs of voters rather than their personal hatred for Donald Trump?

Sane, rational people know that the first step toward climbing out of a hole is to stop digging, but Democrats are neither sane nor rational.  Which is why you can count on them to dig even harder and faster if they come up short on election day, starting by once again refusing to acknowledge their loss.  Remember, unlike Republicans, Democrats play the long game, so a defeat is nothing more than a temporary inconvenience that has the effect of hardening their resolve.

Thus, if they lose, look for the Democrats to take things to the next level and become the equivalent of an opposition terrorist organization, with the first item on their agenda being to declare war on those millions of voters whom Michelle Obama has referred to as “not reflective of the country” and Joe Biden dismissed as “the dregs of society.”  In their view of the world, the uncouth, unwashed masses who voted for Trump should never be allowed to vote again — period.  Lacking a way to legislate that, Democrats will come up with an endless number of schemes to rig future elections in such a way that flyover votes will become irrelevant (e.g., with the help of RINOs, finding a way to abolish the Electoral College).

That said, there is a silver lining in all this — at least for the media.  The certainty that Democrats will continue to investigate, obstruct, and slander Donald Trump and his supporters is a gift to the media at both ends of the political spectrum, because it means that hundreds of millions of Trump-inspired advertising dollars will continue to pour into their coffers.  Capitalism doesn’t recognize good or evil; its driver is supply and demand, and it works its wonders through the marketplace.

Again, it’s hard for me to picture a scenario whereby Democrats win the White House, or even the House or Senate, so the biggest challenge for Republicans is to not become overconfident.  They cannot afford to rest on their laurels.  If they go for the jugular over the next four days at the RNC, it should be game over.

+Robert Ringer is an American icon whose unique insights into life have helped millions of readers worldwide. He is also the author of two New York Times #1 bestselling books, both of which have been listed by The New York Times among the 15 best-selling motivational books of all time.