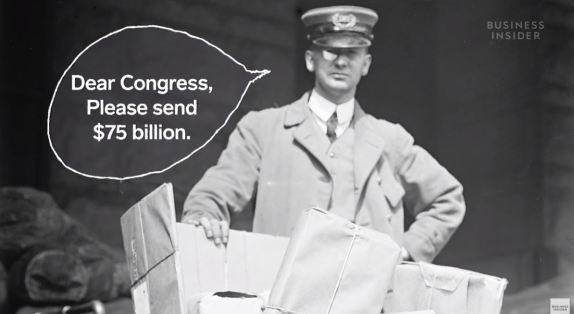 Democrats and much of the media are screaming bloody murder over President Trump’s latest Postal Service reforms observed James Bovard in an article for the American Institute for Economic Research. However, as Mr. Bovard noted, Trump recently approved an extra $10 billion in federal credit for the floundering mail service. But because he is balking at $25 billion in additional funding, according to Democrats he is guilty of “the weaponization of the U.S. Postal Service for the president’s electoral purposes,” according to the Leadership Conference on Civil Rights. Former President Barack Obama also accused Trump of “undermining the Postal Service” to attack voting rights.

The reality is, as Mr. Bovard documented, the Postal Service has been intentionally disrupting its own service since at least the Nixon era. At a high-level meeting in 1969, postal management decided “to no longer strive for overnight mail delivery and to keep this a secret from Congress and the public,” the Washington Post reported in 1974. With revised standards, “mail was considered on time if it took four to five days to arrive instead of three,” the Washington Post noted in a 2015 article.

Democrats know this, and they are counting on it as part of their plan to disrupt the 2020 election and force vote counting into the federal courts, where liberal judges will rewrite election laws according to their own arbitrary and capricious standards.

For example, in Florida, and many other states, mailed absentee ballots must be received by the time the polls close on Election Day – postmarks don’t count. Other states count ballots that are postmarked on or before Election Day.

In New York City, officials struggled for six weeks to count mail-in ballots from the June primary. Up to 20% of ballots “were declared invalid before even being opened, based on mistakes with their exterior envelopes,” the Washington Post noted, thanks largely to missing postmarks or signatures. The New York City Board of Elections provided voters with more than 750,000 ballots with prepaid return envelopes, but the Postal Service routinely doesn’t postmark prepaid envelopes, resulting in a huge number of disqualified ballots. The New York Daily News labeled the primary snafus as a “dumpster fire” while a New York Times headline described it as “the November nightmare.”

Other states also had mail-in train wrecks. In Wisconsin, more than 20,000 “primary ballots were thrown out because voters missed at least one line on the form, rendering them invalid.” In Virginia, almost 6% of mail-in ballots for primary elections were rejected for arriving late. In Nevada, almost a quarter million ballots sent to voters were returned as undeliverable.

The result of the disaster in New York was that an Obama-appointed federal judge decided which ballots would be counted, thus cementing the win for one of Speaker Nancy Pelosi’s closest allies in Congress, who had been challenged in the down-to-the-wire contest by a Far Left outsider candidate.

James Bovard concluded that “State election systems will be overwhelmed this year by a ten- or twenty-fold increase in the number of ballots cast by mail. Democratic activists are calling for changes to state laws to permit the counting of ballots that arrive after Election Day and for abolishing standards to assure the integrity of the individual ballot. Such changes are practically guaranteed to produce far more confusion, delays, and distrust for election results.”

From our perspective of working in, consulting for, and running over 300 political campaigns, that’s exactly what Democrats have in mind, especially for swing states, such as North Carolina, Pennsylvania, Michigan and Wisconsin, and key Trump states like Florida.

Frances Fox Piven, a professor of political science and sociology at the Graduate Center of the City University of New York and the late Richard Cloward, a sociologist and liberal activist (and Piven’s spouse) posited that the way to societal change was to overload and crash the welfare system through four steps:

Radicals on the Far Left have since recognized that such a strategy could be applied to elections with favorable results, and we see the implementation of Step 1, “Overload and Break the Election System” being prepared now.

As we explained many times in the past, Election Day chaos is part of the Democrat Party’s political strategy. See It’s Not A Protest, It’s Not A Riot, It’s A Revolution (Part 4) and The Democrats’ Chaos Strategy Almost Worked In Florida for examples.

The goal of this chaos strategy is to bring the conduct and results of the 2020 election inside the “margin of chaos,” where means other than counting legally cast votes, attributable to legal voters, will determine the outcome.

Crucial to this strategy is to fundamentally change the way American elections are conducted by eliminating in-person, ID checked voting and substituting unverifiable mail ballots, or online voting.

Once Democrats push an election inside the margin of litigation, election laws and the rules and deadlines, with which honest Republican candidates complied pre-election, are thrown out the window by activist Leftist judges and highly partisan Democrat supervisors of elections to the advantage of Democratic candidates and committees who knew in advance that ballots that were illegal on their face would have a good chance of being counted – as they were in the recent New York House District 12 Democrat primary election.

Conservatives must come to grips with the reality that for the new radical progressive Democratic Party politics is warfare, and the only rule in war is to win.