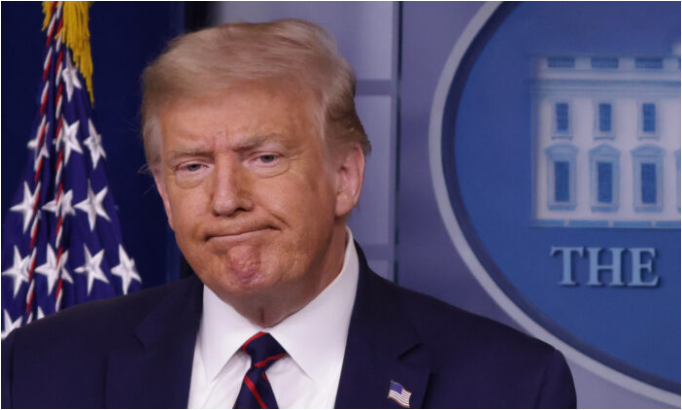 President Donald Trump speaks during a news conference in the James Brady Briefing Room of the White House on July 30, 2020. Earlier in the day, Trump suggested in a tweet that November’s general election should be postponed, citing his unsubstantiated assertions of widespread mail-in voter fraud amid the coronavirus pandemic. (Alex Wong/Getty Images)

I’ve been researching voter fraud since I was the Republican nominee for Congress in Maryland District 8 in 2012 and encountered defective voting machines in multiple counties in my district. I have drawn on that research for a new book, “The Election Heist,” which projects what I believe will be the Democrats’ playbook for this November.

Democrats love to repeat that voter fraud is a myth conjured by right-wing nuts to justify the defeat of their candidates at the polls.

But evidence of voter fraud is overwhelming. Anyone remember “Landslide Lyndon” Johnson, whose first election to the U.S. Senate was secured by stuffed ballot boxes conveniently discovered by his campaign manager?

In 1994, Republican gubernatorial candidate Ellen Sauerbrey of Maryland was winning by close to 30,000 votes until well after midnight, until the Baltimore graveyards and vacant lots voted and gave the election to her opponent by 5,993 votes.

Investigative reporter John Solomon recently cited more than a dozen examples of voter fraud over the past two years, fraud that in many cases changed election results and led to criminal indictments and convictions. The schemes “ranged from old fashion ballot-box stuffing to absentee and mail-in ballot fraud,” as well as noncitizen voting and voter harvesting.

While very serious, these are what I would call garden-variety voter fraud, essentially based on individual initiatives or at most a small group of co-conspirators with no access to sophisticated technology or logistics. Also in this category are the many thousands of double-votes cast by snowbirds in Florida, and others who have recently moved from one state to another.

The president’s concern over mail-in ballots raises a much bigger issue, since a national system of mail-in balloting would be an open invitation to fraud, especially in states and counties with “dirty” voter rolls. A January report by Judicial Watch found 378 counties across America that had more registered voters than citizens of voting age. Judicial Watch successfully sued Los Angeles County in 2019, requiring them to remove 1.5 million people from the voter roles because they had either moved out of the jurisdiction or were deceased.

That’s the scale of the fraud the president is worried about.

Under the mail-in ballot scheme Democrats want to impose, all registered voters would receive a ballot, whether they are dead or alive or still live in the jurisdiction. The question is, who will actually cast those ballots?

Democrat legislators at the state and national level have made it exceptionally difficult for supervisors of elections to clean their voter rolls, citing the canard of “voter suppression.”

And of course they’ll always find examples of when a legitimate voter was stricken from the rolls, most often because they haven’t voted in the last three national elections. To paraphrase a French saying, these exceptions prove the rule: Dirty voter rolls are an invitation to fraud.

Mail-in ballots are very different from absentee ballots, which have been in place for many years in the majority of states for military and other voters who can’t or don’t want to show up at the polls. If anything, absentee ballots bear a greater risk of being rejected if the voter’s signature on the outside envelope doesn’t match the signature on record with the supervisor of election, a common occurrence with older voters who haven’t updated their signature in decades.

In “The Election Heist,” I look at these and other, less well-known examples of voter fraud that involve the hacking of electronic voting systems.

But the vulnerability that most worries me is the software in the optical scanners used to “count” paper ballots.

People tend to think that paper ballots are secure. They aren’t. In fact, they are almost NEVER actually counted. As I learned while I was researching “The Election Heist,” what’s tabulated are the ballot images—i.e., PDF files of the paper ballots generated by scanner software.

What shocked me even more was to discover that most supervisors of elections aren’t aware of this. They believe paper ballots are, well, counted. And therefore, because there is a paper trail, they are secure.

Here is what actually happens. A voter fills out his paper ballot, then feeds it into a scanner. The paper ballot drops into a locked ballot box, where theoretically it can be retrieved and counted by hand.

But in most election districts, even those with mandatory “risk-limiting” audits, the actual paper ballots aren’t recounted, only the ballot images. Those ballot images, remember, were created by software. And anything run by software can be hacked.

In devising my scenario in “The Election Heist,” I wanted to put this theory to the ultimate test, so I had the supervisor of elections in one Florida county actual run the paper ballots through the tabulator the morning after the election, to see if there were any discrepancies with the election night count.

This is standard practice in many election districts using the optical scanning systems increasingly prevalent across America.

But here’s the problem: If the software driving the tabulators was infected with a vote-changing algorithm, then any recount of the paper ballots using that same tabulator will generate the same result. The only way to get a “clean” result is to run the paper ballots through tabulators that haven’t been infected.

The United States doesn’t have a centralized voting system, but roughly 10,000 voting districts, each with their own system. That makes it virtually impossible for a state actor, such as Russia or China, to “hack” a national election. However, it increases the probability that national actors—say, a national candidate, or a party, or a criminal organization—can selectively hack vulnerable election districts in key states and change the vote tallies.

A 2018 poll found that 93 percent of security professionals believed that our election infrastructure is at risk. That is a huge vote of no-confidence in our current election systems.

Supervisors of elections across America need to get smart. They all need to sign up to ERIC, the nation-wide data-base to track double-registrations. But they also need to better understand the vulnerabilities of the electronic systems many of them believe to be invulnerable.

The integrity of the November election is at stake.

New York Times best-selling author Kenneth R. Timmerman is the writer of “The Election Heist” and other books. He was nominated for the Nobel Peace Prize in 2006.