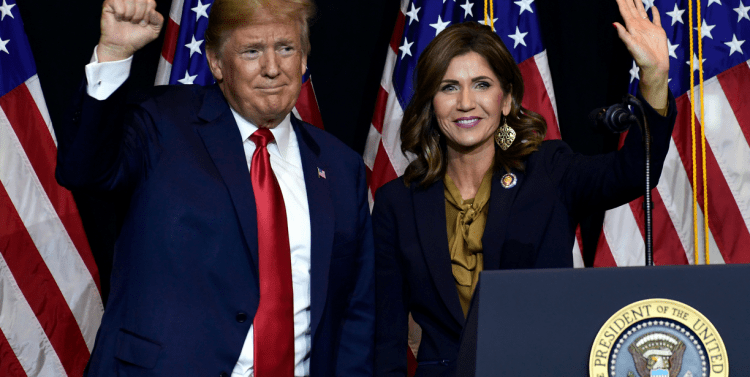 The South Dakota economy never shut down, despite enormous pressure from the Left-wing MSM. As such, South Dakota has recovered 80% of their job losses. The people of South Dakota are very lucky to have Kristi Noem. We will surely be hearing more from Governor Noem in the coming years.’

Governor Kristi Noem is the future of the GOP. 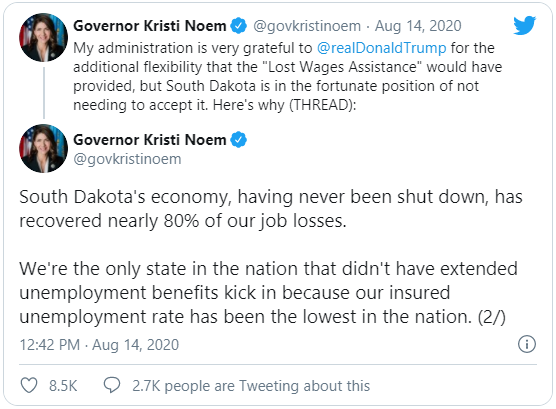 The Sun at thesun.co.uk/news/ on Aug. 16th reports:

SOUTH Dakota’s Republican Governor has declined the $400 federal support saying the state’s residents did not need it.

The state did not shut down during the coronavirus pandemic and Governor Kristi Noem said it was in “fortunate position of not needing to accept it”.

Noem is one of Trump’s most vocal allies and released a statement on on Thursday saying: “My administration is very grateful for the additional flexibility that this effort would have provided, but South Dakota is in the fortunate position of not needing to accept it.

“South Dakota’s Economy, Having Never Been Shut Down, Has Recovered Nearly 80% Of Our Job Losses.”

Under Trump’s latest executive order, the government aims to divert billions of dollars in federal disaster assistance to unemployed Americans.

Noem added: “South Dakota is the only state in the nation that didn’t have extended benefits kick in because our insured unemployment rate has been the lowest in the nation.

“We have the third best housing construction market in the country. And many, many businesses are looking to relocate to South Dakota because of the decisions we made during the pandemic.

“South Dakota is open for business – that applies to our business owners and their employees.”

The prospect of a second round of coronavirus stimulus checks are in jeopardy as the Senate left until September without a relief deal.

The Senate left Washington DC on Thursday for summer recess.

The recess was technically supposed to begin earlier this week, but Senate Majority Leader Mitch McConnell kept the chamber in session in a final attempt to get some sort of package passed.

However, with Democrats and Republicans still butting heads, Senators argued there was little reason to remain in DC with no progress being made, according to The Hill.

The House of Representatives already left DC and are not expected to return until mid-September.

“We will have our regular pro forma meetings through the end of the state work period,” McConnell said as he wrapped up Thursday’s session.

“If the Speaker of the House and the minority leader of the Senate decide to finally let another package move forward … it would take bipartisan consent to meet for legislative business sooner than scheduled.”

Published with permission of gellerreport.com