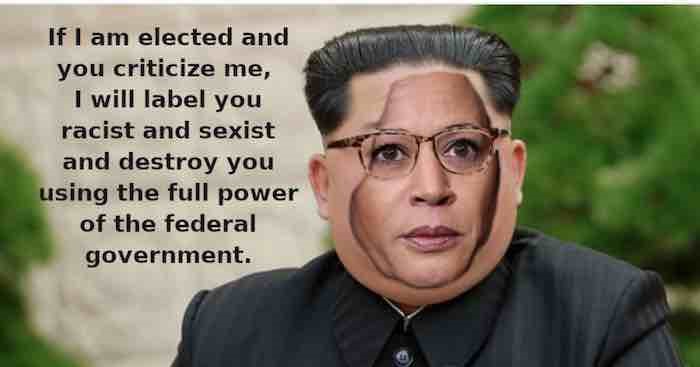 Democrats as they are Sullivan and Goodstein would rather focus on Harris’ first name than her game.

The ongoing Coronavirus Lockdown leaves some folk with far too much time on their hands.

This would include Richard Goodstein, an adviser to Democratic campaigns, interviewed on Tucker Carlson’s prime time Tuesday night Fox show and Margaret Sullivan over at the Washington Post, both in hissy fits all because Carlson got the pronunciation of Harris’ first name wrong.

Both think that there is no bigger sin than mispronouncing the name of Kamala.

Even though stridently anti-Catholic Kamala herself wouldn’t believe in mortal sin, it’s a mortal sin if you bungle the first name of “the first woman of color to be named to a major-party presidential ticket”!

This is Sullivan’s blow-by-blow run-down of how Tucker “mangled” Harris’ first name:

“Goodstein: “Because this will serve you and your fellow hosts on Fox. Her name is pronounced ‘comma’ — like the punctuation mark — ‘la.’ Comma-la.”

“He went on: “Seriously, I’ve heard every sort of bastardization of her —,” and then Carlson broke in: “Okay, so what?”

“With his familiar mocking laugh, Carlson demanded to know what difference it made if he pronounced it KAM-a-la, with the first syllable like “camera.” Or Ka-MILL-a. Or, properly, Comma-la.

According to Sullivan, “Tucker Carlson’s mangling of Kamala Harris’ name was all about disrespect.”

“When I was a young reporter, I had an editor who was a stickler for getting people’s middle initials correct in news stories. (WaPo)

“If you get the name wrong, there’s no reason for anyone to trust anything else you write,” he’d say.

“An extreme position? Maybe, but it is journalistic bedrock that getting names right really matters.”

The editor’s advice was obviously lost on Sullivan, who went on to work for Fake News WaPo, who get so much more than the middle initials in a person’s name wrong.

“Which is why it was so instructive — if utterly predictable — to watch Fox News host Tucker Carlson’s handling of Kamala Harris’s slightly challenging first name on his prime-time show Tuesday, hours after presumptive Democratic presidential nominee Joe Biden named the senator from California as his running mate.

“Not only did Carlson mispronounce it, but when a guest went out of his way to politely correct him, Carlson had one of his trademark fits of pique.

“Carlson’s reaction shows he has no interest in such a thing when it applies to Harris, who made history Tuesday as the first woman of color to be named to a major-party presidential ticket.

“Here’s the thing: It’s really not that hard to get Harris’s name right.

“I was pronouncing it wrong myself until sometime last year when a friend corrected me. (The friend happened to share the candidate’s ethnicity, in part, but that certainly wasn’t the only way to find out. Harris goes out of her way in her 2019 memoir to explain the pronunciation, also using the hint that it’s like the punctuation mark.)

Shame on you, if you didn’t read Harris’ 2019 memoir in which she “goes out of her way” to explain the appropriate pronunciation of her name!

“Even Biden himself doesn’t always get the pronunciation just right; he needs to figure that out, and fast. “

Would that be after basement Joe gets the date and place right?

“But with Carlson, it wasn’t really the mistake. It was his indignant refusal to stand corrected. (WaPo)

“And when you act as if proper pronunciation doesn’t matter — or isn’t worth bothering to learn — that sends a strong message.

According to Sullivan, Goodstein “was merely suggesting a modicum of respect, just a basement-level floor a decent person wouldn’t sink below.

“But for Carlson — who specializes in race-baiting, mockery and smarmy nastiness — there’s no such thing.”

Democrats as they are Sullivan and Goodstein would rather focus on Harris’ first name than her game.

Meanwhile, while Sullivan and Goodstein are trying to get Carlson to place the ‘em-fa-sis’ on the right ‘sill-a-ble’ for Harris, he’s already moved on to investigate ‘Comma-a-la’ Harris for her deadly record on the 2nd amendment.

Before this election campaign is brought to a merciful end, ‘Comma-la’s, ‘Kamalot’s’ name will be mud.