Biden says compulsory mask wearing — “It’s not about your rights” 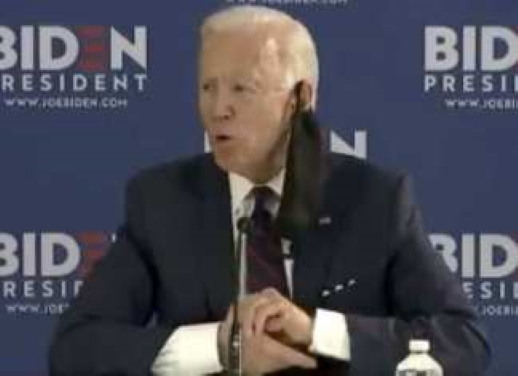 Biden says compulsory mask wearing — “It’s not about your rights”

Leftists are not liberals, they are totalitarians, and we should start making a point of that. They destroy everything they touch, and after leftists obliterate or transform a target, they offer nothing to take its place.

Today, Herr Biden says everyone should be made to wear a mask outdoors at all times and it’s not about your rights. This totalitarian is going to take all your rights, your freedom, and your money if he wins.

A new group called ‘We Have Her Back,’ advises all media what they are allowed to say about Biden’s running mate. The hardened left has already gone after the President for daring to respond to Kamala Harris’ vile allegations.

You may not criticize them or respond. If you remember the Covington Boys, they made it clear you may not laugh, smile, or smirk at them.

When the fascists go from threatening fines and jail for disagreeing with them and moving on to destroying and threatening peoples’ lives, it’s the next level in a movement towards a totalitarian state. It’s all about power.

All the factors are in place. We have the common enemy — religion, Jews, Christians, white men, the right, white boys.

The propaganda is in place to manipulate the collective, the mob. The media has an incestuous relationship with the political left. The political left is also in bed with the corporations and the bad actors who own the media.

The power mongers, the totalitarians, are ready to steamroll the compliant, apathetic populace. Anyone who opposes their mantra will be destroyed.

The last step is total domination.