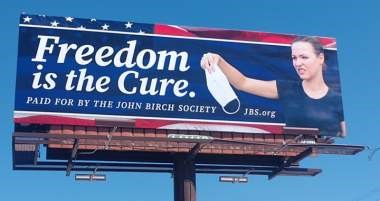 “Freedom Is The Cure.” That’s the simple statement on a set of billboards that have been deemed too “controversial” by “the community,” causing a national advertising agency to take down two of the billboards in Spokane, Washington. The graphic element accompanying the text features a young woman holding up a white surgical mask and displaying a facial expression of contempt toward the object, which “health authorities” in cities, states, and other jurisdictions have ordered inhabitants to wear.

The four-word text of the billboard ads plays off the April 20, 2020 “Freedom Is the Cure” special report of The New American magazine, which provided an in-depth look at the medical, scientific, social, economic, and political ramifications of the COVID-19 “pandemic” and the unprecedented global havoc that COVID-related policies have caused.

The two billboards were put up by Lamar Advertising, a major national advertising agency, under a contract with local chapters of The John Birch Society, a constitutionalist education organization (of which this magazine, The New American, is an affiliate). However, shortly after the billboards went up, Lamar ordered them to be taken down. The reason? It seems “the community” had spoken.

“Just days after controversial anti-mask billboards went up in Spokane, owners of the billboard company Lamar Advertising removed the messages after receiving feedback from the community,” Spokane’s daily newspaper, the Spokesman-Review, reported. According to the news article, Lamar Spokane general manager Duane Halliday “said it was clear from the response to the John Birch Society billboards that leaving them up was not in the community’s best interest.”

“The community was not super happy with that message,” Halliday reportedly told the Spokesman-Review. “We try to stay away from anything that is far too offensive to the public. Right now we just felt like the risk to the public was too great.”

The New American reached out to Halliday to find out what it is about the ads that is “far too offensive to the public,” and what precisely was he referring to with his comment that “the community was not super happy with that message.” Is freedom offensive? What constitutes the vague entity called “the community”?

We pointed out that Caleb Collier, the executive field coordinator for The John Birch Society in the 11 western states had placed a graphic on his Facebook page showing three Lamar billboards side by side: a marijuana advertisement, a provocative sex shop ad semi-nude women, and the JBS “Freedom Is the Cure” anti-mask ad. Collier’s Facebook posting asks, “One of these was censored, guess which one.” 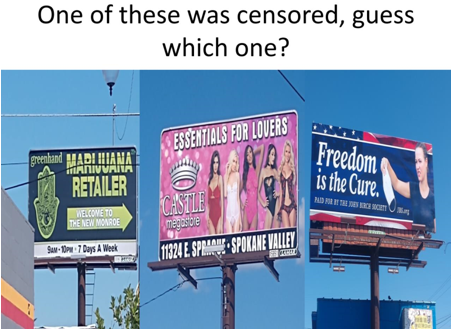 “We’re in the middle of a pandemic,” Halliday told us, evading the question. “And if the State of Washington and the governor have issued a mandate regarding masks, then we as a corporate citizen should support it.” Does that mean, we asked, that political mandates by politicians and “health authorities” should trump First Amendment rights, that there should be no dissent allowed once the omnipotent state has spoken? Halliday wouldn’t respond to that question directly, but repeated his claim that COVID-19 “health risk is too great” and their corporate responsibility is to follow directions issued by the “authorities.”

If that is the case, we asked, then why did Lamar accept the billboard ads in the first place, since Governor Jay Inslee and the Washington state political establishment have made their draconian COVID agenda clear for months? He merely reiterated his statement that “we’re in the middle of a pandemic,” and the State of Washington and the governor have spoken.

We inquired as to what kinds of metrics Lamar relied on to conclude that “the community” found the billboards offensive. Phone calls, emails, letters, in-person contacts, Twitter, Facebook, other social media? “It was a combination of those things,” he told The New American. And how many comments did he receive? A dozen, dozens, hundreds? He declined to quantify the comments.

This reporter pointed out that Lamar is following the pattern of many other corporate giants and celebrities that capitulate and grovel before the political correctness Gestapo. But, whether it is actual street mobs or the more common virtual troll mobs of social media, it invariably is a small cohort of very vocal, noisy, professional activists — whose voices are amplified by a sympathetic leftist media mob — who are giving an appearance of popular support that really isn’t there.

It was clear that Halliday was not going to go off script and risk retaliation from “the community” mob, so we contacted the Birch Society representative Caleb Collier. Collier described the Lamar Advertising decision to take down the billboards “an act of corporate cowardice before the cancel culture.” He noted that the Lamar contract stipulates that the company may terminate the contract at any time. “They do have this right. I’m not questioning that at all but, in my opinion they violated the contract,” Collier said. “If they had an issue with it, then they shouldn’t have allowed it in the first place.”

Nevertheless, Collier says he is seeing a silver lining in the incident. Regional coverage in the liberal-left Spokesman-Review has resulted in an outpouring of support and inquiries from readers who want to join The John Birch Society or learn more about it, he says. And a radio advertiser has contacted him to set up a radio advertising campaign with the refunded proceeds from the canceled Lamar billboards. “This has backfired on the censors in a way, and has probably brought us more public exposure than the billboards would have,” Collier told The New American. “I’ve gotten new members and at least one whole new chapter starting up, as a result, and a lot of excitement.”

“The freedom message is still going out, despite the efforts to kill it,” says Collier.

Senior editor William F. Jasper is an author/journalist/commentator/documentary producer with a well-earned reputation as one of America’s top investigative reporters.

Mask Mandates Drive Discord and Division, Prompt Anger and Violence Around the Nation