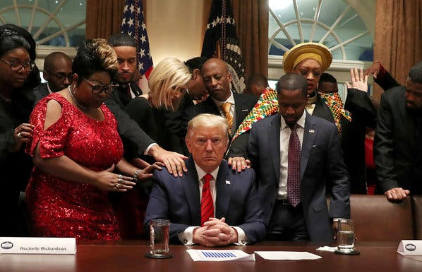 No, I’m not kidding. I believe the black vote will be the key to President Trump’s coming electoral landslide. No, it’s not a “Black Silent Majority.” Trump and Republicans aren’t winning a majority of black votes in 2020. But we don’t need a majority. We just need a “Black Silent Minority” to clinch a Trump victory.

I may understand black voters better than any white Republican in America. I’m a S.O.B. (son of a butcher) who grew up on the wrong side of the tracks. I grew up on the Bronx borderline in Mt. Vernon, NY, a majority black town. I attended an almost all black middle school. Then I attended an almost all black Mt. Vernon High School- 4000 students and only a few were white. I was one of them.

I believe a “Silent Minority” of black Americans are conservative. I believe this “Silent Minority” will vote for Trump, now more than ever. Not in spite of Black Lives Matter, or defund the police movement, or riots across America. But because of all of that.

Here’s why I believe it will happen.

These voters often live in dangerous, high-crime neighborhoods. Or they’ve escaped those dangerous neighborhoods for the suburbs. They understand, perhaps more than any other group, the police are “the Thin Blue Line.” Disband police, or defund police, and it’s black neighborhoods that will suffer the most.

The latest polls prove my gut instincts right. A new Gallop poll reports over 80% of black Americans do not support disbanding or defunding police. More significantly, about 20% want more police.

The latest poll proves me right again. A Rasmussen poll finds that 83% of voters agree with President Trump’s decision to kill an Obama-era regulation that brings “diversity” to suburbs by building low-income housing.

But it’s not just blacks. Research shows literally everyone wants out of big cities. The whole America is rushing to find a home in the suburbs, safe from crime and Covid. The four states with the highest home appreciation in 2020 are Idaho, Montana, Wyoming and Utah. Trust me, the people escaping to the Rocky Mountain West aren’t voting Democrat.

The Black Silent Minority doesn’t want the same political or economic agenda as the late civil rights icon John Lewis- because they don’t want their neighborhoods looking anything like his Baltimore district.

The Black Silent Minority doesn’t support the Democrats open border agenda- because millions of foreigners will take away black jobs.

Is there still some racism in America? Sure. But the Black Silent Majority knows America is much like marriage. Marriage is the worst institution in the world- except for all the others.

The Black Silent Minority feels the same way about America. It isn’t perfect. I hear lots of complaining, but I don’t see anyone leaving. America has lifted more blacks out of poverty than any other nation on earth. America isn’t perfect. But it’s the best we’ve got in world history.

The same can be said about President Donald J. Trump. He’s not perfect, but he created more black jobs and lower black unemployment than any president in history- including Barack Obama.

That’s why the black vote for Trump will double from 8% to 16% on November 3rd. And that’s why the Black Silent Minority will be President Trump’s secret weapon.