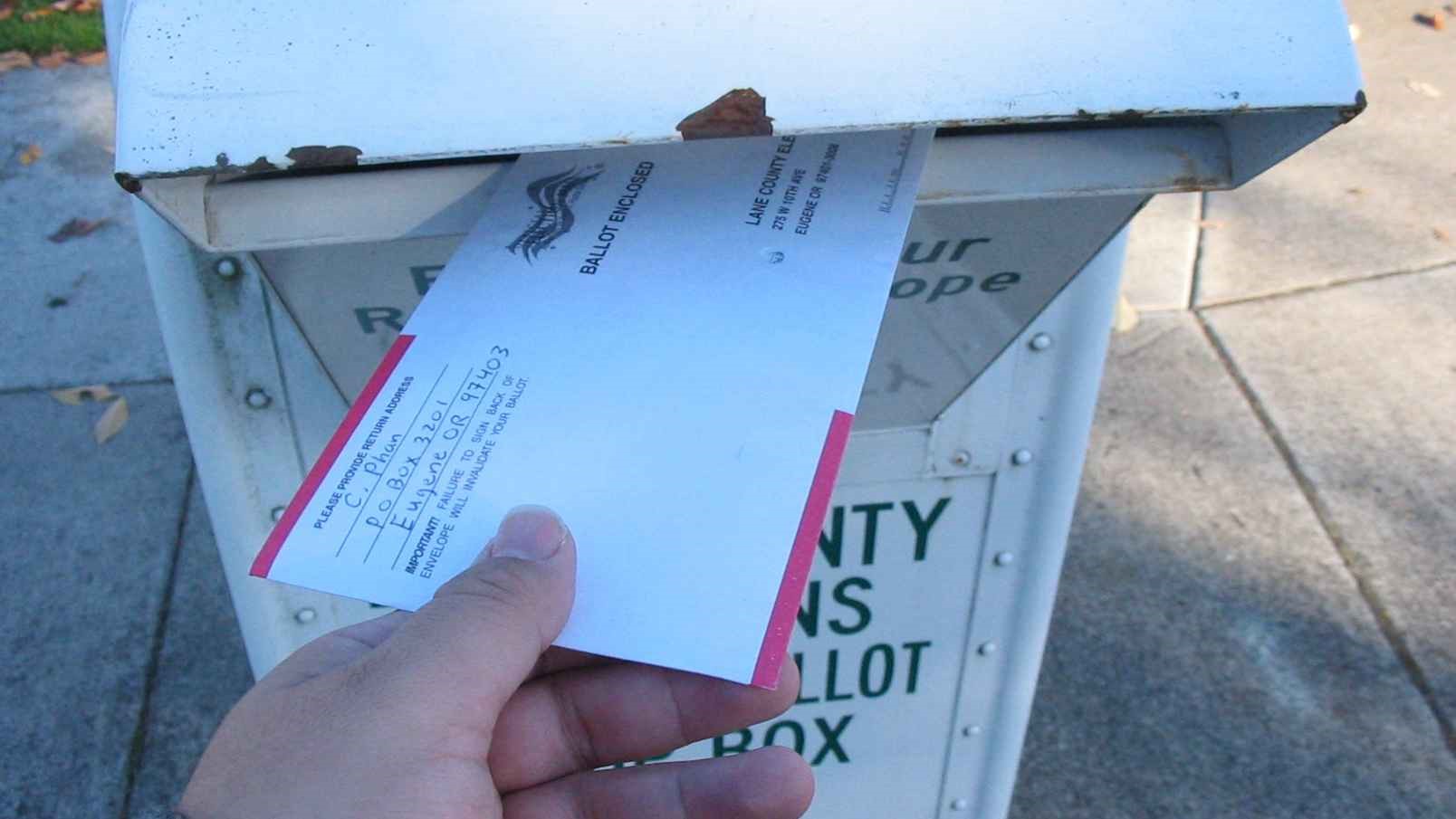 The major domestic threat to the legitimacy of the 2020 presidential election.

Last Thursday, President Trump raised the idea of possibly delaying the November 3rd general election date due to concerns about the implications of universal mail-in voting for the integrity of the presidential election. The president tweeted, “With Universal Mail-In Voting (not Absentee Voting, which is good), 2020 will be the most INACCURATE & FRAUDULENT Election in history. It will be a great embarrassment to the USA. Delay the Election until people can properly, securely and safely vote????”

The mainstream media and the political establishment were aghast at the thought of President Trump using the coronavirus as a pretext to delay the presidential election. They need to take a deep breath. President Trump told reporters later in the day that he did not want any change in the election date, although he did warn of the possibility of significant delays in the tabulation and announcement of the final result. In any case, only Congress has the power under the Constitution to change the date of a presidential election. There’s no chance of Congress doing so this year. The Democrats’ opposition is a given, of course. But the Republicans in Congress are also adamantly against the idea. “Never in the history of the country, through wars and depressions and the Civil War, have we ever not had a federally scheduled election on time, and we’ll find a way to do that again this November 3,” said Senate Majority Leader Mitch McConnell.

So why did President Trump bring up the possibility of election delay in his tweet (with four question marks) in the first place? The reason was to call attention to the dangers of universal mail-in voting that threaten the legitimacy of the 2020 presidential election. There is a real potential for fraud, to be sure. But even in the absence of widespread fraud, universal mail-in voting faces significant challenges in ensuring a fair election result, starting with its reliance on the all too unreliable U.S. Postal Service (USPS). Moreover, states’ broad authority in the administration of elections in which their citizens vote, including federal elections, does not mean they can throw caution to the wind and dilute the voting power of clearly qualified voters. This will most certainly happen when states introducing universal mail-in voting for the first time in a presidential general election do so without robust safeguards to ensure the integrity of the mail-in process. There is too little time to devise and implement anything close to the safeguards that presently exist for in-person voting and the more limited use of absentee ballots as the exception rather than the rule. There are a few smaller states that have used all or majority mail-in voting for years with safeguards that have proven workable. However, such safeguards cannot simply be transplanted into the systems of larger states overnight.

The U.S. Postal Service has proven its inability to handle properly the huge anticipated volume of mail-in ballots in a timely and uniform fashion across the United States. As a Democratic commissioner and co-chair of the New York State Board of Elections said: “One of the big problems of going to a vote by mail system is that the Boards of Elections are now in partnership with the U.S. Postal Service for conducting the election.” We are still awaiting the final results in a few contests from this past June’s Democratic primary in New York where there was significant reliance on mail-in voting.

A major election law snafu involving New York’s Democratic primary illustrates the U.S. Postal Service’s problems. A class action lawsuit alleges that an executive order issued by Governor Andrew Cuomo in the middle of the coronavirus pandemic broadening the use of mail-in ballots statewide led to confusion at the USPS. The USPS was supposed to ensure election mail was postmarked, even though it was postage paid. The USPS was provided e-mail instructions as to how the postmark should look. New York State Board of Education officials received assurances from the USPS that any ballot envelopes run through their automated machines would receive the necessary marking. But the confused U.S. Postal Service failed to place the required postmarks in thousands of cases. Thus, even though voters filled out their ballots correctly and mailed them in as instructed, the ballots were allegedly invalidated because they were missing the necessary postmarks from the post office.

The result, according to the class action complaint, was the disenfranchisement of “a massive number of voters, without any warning or anything resembling Constitutionally adequate protections.”

New York was not an isolated case. On July 7, 2020, for example, the Office of the Inspector General of the U.S. Postal Service issued a Management Alert entitled “Timeliness of Ballot Mail in the Milwaukee Processing & Distribution Center Service Area.” The alert found that for ballots processed in the Milwaukee area in connection with the April primary election, there were “issues related to the timeliness of ballots being mailed to voters, correcting misdelivery of ballots, an inability to track ballots, and inconsistent postmarking of ballots.”

In Ohio, there was evidently an “unintentional missort” of more than 300 ballots, according to the U.S. Postal Service’s chief operating officer, which caused them to be delivered too late to be counted by a county Board of Elections. “An unintentional missort of a tray of Butler County return ballots ultimately contributed to a gap in the mail flow, resulting in the delay,” he said, which he identified as “an opportunity for improvement.” No kidding!

For those Trump-haters who blame post office delays on certain changes instituted by the president’s Postmaster General appointee Louis DeJoy, think again. The examples of post office related problems with mail-in voting described above, as well as breakdowns in other states, occurred before the July 10, 2020 implementation date for the new Postmaster General’s changes. We are talking about a record of sheer incompetence that, when replicated on a far larger scale in connection with this year’s general election, could well affect the final results in swing states such as Ohio and Wisconsin.

The U.S. Post Office recognizes its own shortcomings. But not Barack Obama. In his divisive remarks at the funeral of Rep. John Lewis, Obama demagogued the issue. He took time out to criticize those he said were “undermining the Postal Service in the run-up to an election that is going to be dependent on mailed-in ballots so people don’t get sick.”

The post office’s processing and delivery problems are reason enough to be concerned about the integrity of an election driven significantly by universal mail-in voting. But the problems run deeper than the post office itself. There are no consistent national standards for election officials to follow in administering extensive mail-in voting. Despite problems of its own with in-person voting, at least the person showing up to vote personally signs in and enters the voting booth to cast his or her vote. Put aside the issue of requiring credible voter ID, which affects both in-person and mail-in voting. A state unprepared to deal with huge volumes of mail-in ballots will have no way of even knowing whether the person whose name appears on the mail-in ballot is currently a resident of that state or is the same person who actually cast and mailed in the vote.

In the most liberal states like California, mail-in ballots themselves are sent automatically to all voters in the state. Anything goes. There are no time-tested procedures to reduce the potential for mail-in voter fraud or widespread mistakes, such as mailing ballots to the wrong address or to large residential buildings where they could get intercepted and filled out by someone other than the intended recipient. Without measures to effectively verify the accuracy of a state’s registration rolls and the current addresses and corresponding identities of the intended recipients of the ballots before sending out the mail-in ballots, contaminated election results are inevitable. The election results will also be questionable in the larger number of states where mail-in ballot applications will be sent automatically for the first time to all purported voters who don’t need any reason for requesting the mail-in ballots.

At the other end of the spectrum are states that scrupulously limit who can return a voter’s ballot, limit the reasons for allowing someone to cast a mail-in ballot, or require precautions such as witness signatures, notarizations, or copies of voter identification. The ballots of voters in those states – whether cast in person or by mail – may well be cancelled out by invalid mail-in ballots for president accepted by states with sloppy mail-in ballot procedures.

States like Oregon and Colorado that have used mail-in voting extensively during several past election cycles at least have a track record managing large influxes of mailed ballots with trained personnel, technology and logistics infrastructure in place. We can’t say the same about a state like California that intends to plunge ahead into uncharted waters. For years, California was not even in full compliance with the National Voter Registration Act, which requires states to maintain accurate and current voter registration rolls.

There are no consistent national procedural standards for validating the integrity of universal mail-in balloting to ensure that every individual’s legitimate vote is given meaningful effect. In states with grossly inadequate safeguards for handling huge volumes of mail-in ballots, some voters will have their ballots invalidated for faults not attributable to the voters themselves. Other mail-in ballots will be counted even though they were not completed properly by qualified voters or postmarked and delivered by the legal deadline.

Voters across the country in states that have more careful procedures for mail-in voting are likely to find their votes cancelled out by illegitimate mail-in ballots in states with a standardless mail-in process.

The net result of a headlong rush this year to embrace universal mail-in voting across the country will be challenges to the legitimacy of the presidential election that will end up in prolonged litigation.