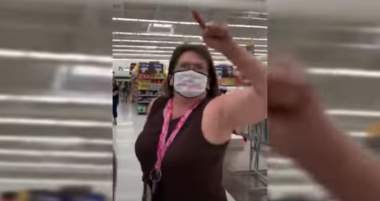 What do you do if you’re just peacefully shopping, when, all of a sudden, a couple of crazed, mask-wearing shoppers start screaming at you, get in your face, threaten, and assault you?

That’s precisely what happened to Jeriah and Landyn Dickinson at the Walmart in Post Falls, Idaho. The two teen brothers were minding their own business when they were accosted by an hysterical mask-wearing woman who called them “terrorists” for not wearing face masks. The middle-aged woman, supported by a mask-wearing man (presumably her husband) became totally unhinged and can be seen charging around the store like a mad elephant, pointing at the boys and yelling to other shoppers and Walmart employees that she had found these dangerous violators of the COVID mask mandate. (See video below.) 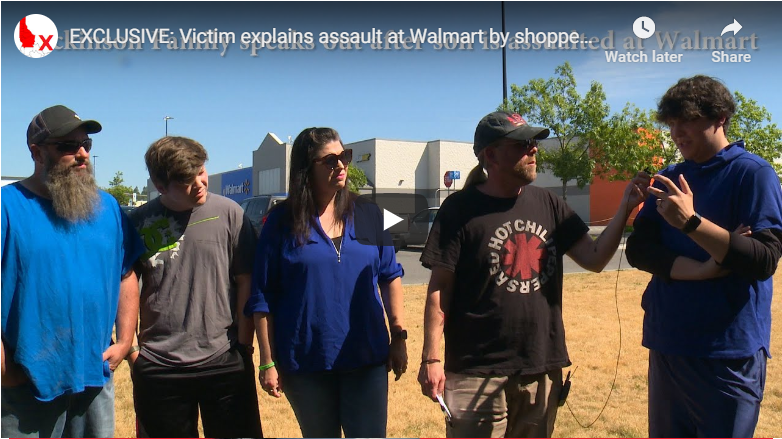 The Dickinson brothers, maintaining their cool, captured the frightening tirade on their cell phones. This seemed to infuriate the COVID-crazed woman even more, and she came back, up close, to scream at the boys again, this time yelling “Stop it!” and hitting Jeriah on the shoulder as he was filming. The man accompanying her then also got into the act, stalking up to the teens and yelling at them “Go get a damn mask and put it on your faces!”

Independent journalist/videographer Casey Whelan interviewed the Dickinson brothers and their parents for his website North Idaho Exposed. Jeriah told Whelan what led up to the disturbing encounter at Walmart: “Well, we first walked in and they asked us to wear masks and we politely declined wearing masks and they let us through anyway. And we were just walking through and this couple decided to come up and start harassing us and said ‘I hope your grandparents die of COVID,’ and called us jerks. And we just said ‘Have a good day.’ And then they came up again and I decided to pull out my phone and start recording, and that’s when all the stuff happened that’s on camera. She hit me right here on the shoulder. I actually blew my shoulder out that same day playing football, so she hit the exact same spot that I blew out my shoulder.”

Jill Dickinson, the boys’ mother, says when she saw the video, “the Mama Bear came out in me.” “My blood was boiling,” she told Whelan. “This is not OK. We live in a country where we have freedoms, we have liberties, and for my kids to walk into a Walmart and get apprehended and accosted the way they did — it’s uncalled for,” she said. “It’s a simple freedom to be able to walk into a store and get some snacks with your buddies, when you’re a teenager, and it’s sad that my kids have to be afraid to do that.”

Mrs. Dickinson told The New American she and her husband Rob have filed a police report and assault and battery charges against the masked couple. She also said that the public response they have received has been “overwhelmingly positive and encouraging.” The video has gone viral on multiple platforms and she says, “We have received supportive comments from all over the world, from people in Europe, Asia, and Canada. It’s really amazing, and it’s so good to know there are so many people who understand and appreciate the importance of freedom” and the threat to it from the COVID hysteria.

The Walmart attack on the Dickinson brothers, like the COVID mob assault on a non-mask-wearing woman at a Staten Island, New York, grocery store, is yet another disturbing signal of the corrosive impact of liberal-left ideology and media propaganda. Over the past four years, thousands of unhinged, anti-Trump Americans affected by Trump Derangement Syndrome (and egged on by the Fake News media) have engaged in extreme, violent, and destructive acts. Now, triggered by the COVID-19 hysteria and the Black Lives Matter cancel culture, the same types of violence-prone people have found new causes for venting their vehemence. The type of personality seen in the COVID-crazed attacks is precisely the type of personality that was recruited into the Strumabteilung or SA (Storm Troopers), Hitler’s private army of brown-shirted thugs who played a major role in bringing the Nazi Party to power in Germany. In addition to bullying and beating up Hitler’s opponents, the Strumabteilung led the German people in Jew-shaming, pointing out Jews and yelling “Jew, Jew, Jew!”

The alarming rise of the virulent mask shamers has been made possible by the unceasing COVID hysteria pumped up by the media propagandists. However, as countless examples have shown, the politicians, medical bureaucrats, media commentators, and COVID activists who scold and lecture us don’t even believe their own propaganda. Barack Obama, New York City Mayor Bill de Blasio, Chicago Mayor Lori Lightfoot, CNN’s Chris Cuomo, New York Governor Andrew Cuomo, Dr. Anthony Fauci, and others too numerous to mention, have been caught cavalierly violating the mask, quarantine, and social distancing mandates they are trying to force on everyone else. A particularly revealing (and satisfying) turnabout on media mask shaming occurred when MSNBC’s Cal Perry attempted to shame beachgoers who were enjoying sunshine and recreation without face masks and social(ist) distancing. (Oh, the horror of it!) But the cameras were turned on Perry and MSNBC, and cell phone videos showed that members of Perry’s own MSNBC camera crew were not wearing face masks.

Of course, as is now widely recognized, the entire mask mandate is based on fraudulent, politicized “science” that defies both common sense and medical/scientific fact, as the imbedded video and linked articles below explain in detail:

Senior editor William F. Jasper is an author/journalist/commentator/documentary producer with a well-earned reputation as one of America’s top investigative reporters.

Should I Wear a Face Mask?

The COVID “Cure” Is More Deadly Than the Disease