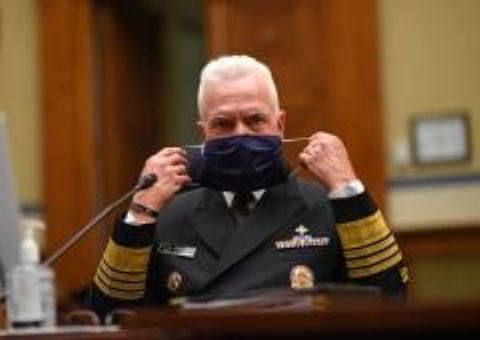 Admiral Brett Giroir, director of the US coronavirus diagnostic testing, adjusts his face mask as he testifies during a House Subcommittee on the Coronavirus Crisis hearing on a national plan to contain the COVID-19 pandemic, on Capitol Hill in Washington, DC on July 31, 2020. (Photo by KEVIN DIETSCH/AFP via Getty Images)

Centers for Disease Control and Prevention Director Dr. Robert Redfield acknowledged Friday that the number of COVID-19 deaths could be inflated where someone who had the virus actually died from something else, but it was recorded as a COVID death.

At a House Oversight and Government Reform Committee hearing, titled, “The Urgent Need for a National Plan to Contain the Coronavirus,” Rep. Blaine Luetkemeyer (R-Mo.) said he wished that Admiral Brett Giroir, assistant secretary for health at HHS, didn’t have to leave the hearing early, because the last time he appeared before the committee, they discussed the incentive for people in the medical field to claim someone died of COVID just to get more money.

“I asked him a question last time he was here, and we didn’t have a time to continue our discussion with regards to the sort of perverse incentive for medical folks to claim that somebody died of COVID versus if it’s an automobile accident for instance, as long as you have COVID in your system, you can blame COVID and which means you get more money as the attending physician, hospital, whatever,” the congressman said.

“[Giroir] acknowledges that the statistics he’s getting from the states are inflated. We found that the governor of Colorado, who was a Democrat, actually did research on this and found he had to get rid of 12% of the deaths that were recorded in the state,” Luetkemeyer said.

He asked Redfield to comment on the “perverse incentive” and whether there is an effort “to try and do something different in a way that these deaths are recorded so we actually have better records and better numbers to go with.”

The CDC director said that the same thing happened in the early days of the HIV epidemic.

“I think you’re correct in that we’ve seen this in other disease processes too. Early in the HIV epidemic, somebody may have a heart attack but also have HIV. The hospital would prefer the DRG for HIV because there is greater reimbursement. So I do think there’s some reality to that. When it comes to death reporting though, ultimately, it’s how the physician defines it in the death certificate,” Redfield said.

“In our national health statistics group here in Hyattsville, we review all those death certificates, so I think it’s probably less operable in the cause of death. Although I won’t say it’s not some cases. I do think though when it comes to hospital reimbursement issues for individuals, they get discharged, there could be some play in that for sure,” he added.