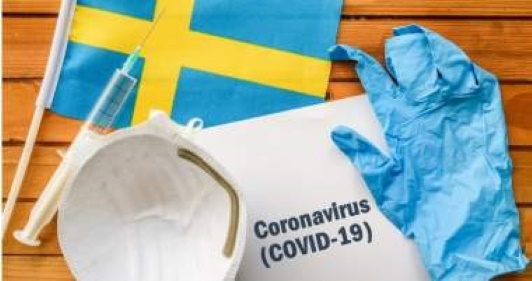 While the rest of the world locked down their citizens and shuttered business and industry as a result of apocalyptic — and apocalyptically incorrect — modeled scenarios of the spread of the SARS-CoV-2 virus, the Nordic nation of Sweden assessed the situation with a more level-headed analysis and chose to confront the crisis without lockdowns.

For adopting this approach, the mainstream media was awash in stories about how the Swedes were surely courting a bloodbath of epic proportions. Then, when the Swedish approach began to show success when compared to other nations that locked down, mainstream-media organs continued to fret that the country would eventually experience a COVID catastrophe.

That catastrophe has not come to pass. In fact, Sweden continues to have success, demonstrating that statist lockdowns are not necessary.

Last week, the Daily Mail reports, “Sweden recorded only 1,716 new cases … down from 9,094 just a month earlier, and deaths have also been on the decline.”

Anders Tegnell, the nation’s top epidemiologist, said the the curves of cases and deaths were headed in the right direction. “The curves go down, and the curves over the seriously ill begin to be very close to zero. As a whole, it is very positive,” he said, according to the Daily Mail.

How well has Sweden weathered the coronavirus crisis? The Daily Mail notes: “Measured by cases per million people, Sweden now has a similar infection rate to the UK and a much better one than the US.”

Speaking to Freddie Sayers of UnHerd.com, Tegnell reflected on Sweden’s approach to the pandemic.

“I think to a great extent it’s been a success,” he explained. “We are now seeing rapidly falling cases, we have continuously had healthcare that has been working, there have been free beds at any given time, never any crowding in the hospitals, we have been able to keep schools open which we think is extremely important, and society fairly open — while still having social distancing in place in a way that means that the spread of the disease has been limited.”

He also noted that Sweden’s more voluntary approach seemed to work at least as well as the more totalitarian measures utilized elsewhere.

“In many ways the voluntary measures we put in place in Sweden have been just as effective as complete lockdowns in other countries,” he noted. He also pointed out the significant problems caused by lockdowns.

We know, he said, “that lockdowns also have big other effects on public health. We know that closing schools has a great effect on children’s health in the short and the long term. We know that people being out of work also produces a lot of problems in the public health area. So we also have to look at what are the negative effect of lockdowns, and that has not been done very much so far.”

Hardcore lockdowns also throw people out of work, disrupt supply chains, and destroy the economy, putting people at risk of hunger, despair, and homelessness. In the United States, as well as elsewhere, the lockdowns have caused a dramatic increase in demand for assistance from charitable food banks and have put millions out of work — and with precarious finances are making those millions face an inability to pay bills and confront the unhappy likelihood of eviction from their homes and apartments.

But Sweden seems to have avoided some of the dramatic negative economic impacts caused by lockdowns elsewhere. In fact, a report in the Financial Times excerpted by the website ZeroHedge pointed out that many Swedish companies have been reporting financial results that have exceeded analyst’s expectations.

According to FT: “Every day for the past two weeks, Swedish company after Swedish company has beaten expectations. From telecoms equipment maker Ericsson to consumer appliances manufacturer Electrolux via lender Handelsbanken and lock maker Assa Abloy, Swedish companies have delivered profits well above what the market was expecting, even if in some cases that merely meant a less precipitous decline than analysts had feared.”

Why? According to paper: “The bumper crop begs the question of how many of the positive surprises are due to Sweden’s more controversial approach to managing coronavirus. Unlike the rest of Europe and North America, the country did not have a lockdown and kept schools and many shops and businesses open — a public health experiment that has attracted global scrutiny and drawn both praise and censure.”

The point was underscored for the Financial Times by Alrik Danielson, CEO of Swedish manufacturing company SKF.

Dissenting from the lockdown orthodoxy isn’t the only way Sweden is charting its own course. The country also is resisting the new fetish for face masks.

“With numbers diminishing very quickly in Sweden, we see no point in wearing a face mask in Sweden, not even on public transport,” Tegnell said.

Dennis Behreandt is a research professional and writer, frequently covering subjects in history, theology, and science and technology. He has worked as an editor and publisher, and is a former managing editor of The New American.