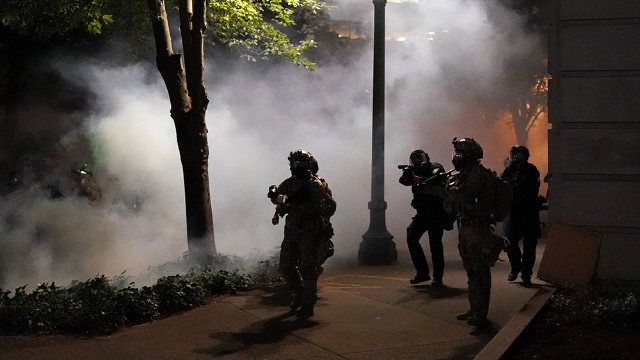 There are seasons in human affairs when mankind can see much more than just the tip of the iceberg of Satanic control in this world. Evil prefers to spread in darkness, but when God’s people stand firmly against the Satanic agenda despite increasing punishment, they compel the adversary to send ever greater numbers of his forces out of the shadows onto the battlefield. In those rare moments, the full extent to which the leaders and systems of this world are corrupted gets exposed to those with spiritual discernment.

It is a dark and chilling sight when the demonic realm attacks in waves of escalating fury and power – like a comic-book villain transforming into a massive and malevolent behemoth, part real and part illusion – seemingly beyond the power of the righteous to defeat.

That is exactly what is happening today in the Marxist revolution against Trump: a continually escalating spiritual war of aggression is being waged on the political and cultural battlefields of the physical world – all because Donald Trump and his Bible-believing Christian base firmly resist the Marxist global agenda.

There have been previous examples, including the elites’ campaign to destroy Robert Bork to prevent his confirmation to the Supreme Court, but the closest parallel to today’s anti-Trump coup occurred when the Christian para-church network Oregon Citizens Alliance took on the LGBT agenda at the height of the Reagan Revolution. OCA’s ultimate defeat (through establishment GOP treachery and that of GOP-allied churches) is the reason why Oregon’s de facto capital, Portland, is now the epicenter of Marxist revolution in America. I know, because I was on the front lines of that battle, which launched my 30-year career as a Christian social activist and missionary to the global pro-family movement.

Ironically, I was an unwitting Marxism-influenced teenager when I migrated from Massachusetts to Portland in 1977 because of its liberal drug laws. I spent almost 10 years of my 16 year bondage to drug and alcohol addiction in that city, hanging out with the radical leftists, including the very types of people rioting today, on the very same streets.

But in 1986 I was delivered and healed on my knees in prayer at a secular rehab clinic. Months later my former drug dealer, who had independently converted to Christ, took me to a Bible-believing church for the first time where a truly godly pastor opened my eyes and heart to Truth. I switched sides in the culture war, and after some inner spiritual preparation (but no practical training or worldly credentials), the Lord miraculously made me the OCA’s state communications director.

Through many local and statewide ballot measure campaigns, I was in the hottest firefights on the leading edge of culture war. The Nazi swastikas repeatedly painted on the Portland megachurch I attended (solely because I worshiped there) were just a minor irritant compared to the campaign of severe punishment all of us at OCA endured: hate mail, bomb threats, death threats too numerous to count, vandalism, public harassment, continuous malicious character assassination (by ALL of Oregon’s corporate media), four separate major lawsuits over a five-year period seeking over $11 million (against OCA and me personally), numerous serious false-flag hate crimes blamed on us, including a series of 21 cross-burnings on the front lawn of a black, supposedly wheelchair-bound lesbian who was finally caught by two rogue cops in defiance of the Portland police chief – a prominent OCA critic who later became mayor.

When I say our OCA experience prefigured today’s anti-Trump campaign, I’m not exaggerating. I personally saw black-clad Oregon Antifa terrorists marching with “Kill the Police” signs more than 20 years ago. I experienced the betrayal of the Romneyesque Republican Party Chairman Craig Berkman doing an anti-OCA joint television commercial with his Democratic counterpart, and then the Republican-controlled legislature “preempting the field” on sexual orientation policy to instantly invalidate 26 hard-fought city and county ballot measures we passed with margins up to 80% – all while Portland-area GOP-allied “conservative” churches and a turf-conscious rival “Christian” PAC attacked OCA as “divisive.” I experienced the 11th-hour betrayal of the Portland Catholic Archbishop William Leveda who succumbed to pressure and urged a No vote on our “No Special Rights Act” before transferring to San Francisco. (I believe it was “Christian” compromise to appease the evildoers that ultimately defeated us.) 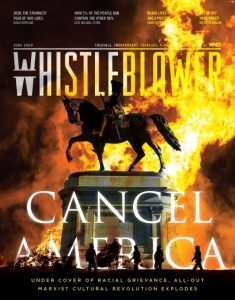 Why is America suddenly in the grip of a violent revolution – and why are so many public officials enabling it? The shocking answers are found in “CANCEL AMERICA: Under cover of racial grievance, an all-out Marxist cultural revolution explodes,” the newest issue of WND’s acclaimed monthly Whistleblower magazine. Available in both print and digital versions. Better yet, subscribe at a discounted rate!

While OCA’s battlefield was the LGBT agenda, and it is no accident that the co-founders of Black Lives Matter are Marxist lesbians, today’s battle transcends that issue. However, what OCA accomplished in our season of firestorms was to expose the whole Satanic army to public scrutiny: from the rotten RINOs, to the corporate giants, to the nonprofit foundations to the fake church leaders, to the media, to the universities. We were so persistent and unyielding in our stand for truth that the demonic realm had to completely emerge from the shadows to fight us. We exposed the whole Satanic iceberg in Oregon – just as Trump is now doing nationally.

Sadly, there wasn’t a constitutionalist hero in Oregon to melt that cancerous lump then, and thus the demonic hard left, greatly emboldened by victory despite being exposed, gained a “mandate to escalate,” explaining why Portland is now the national poster-child for Antifa anarchy. But America today has the earthy and bare-knuckle fighting but Constitution-loving Donald Trump. He’s not a perfect man, but neither were any of the “Judges” raised by God in times of crisis to lead the Israelites. If, despite everything being thrown at us, we can get Trump reelected, America’s story might possibly have a happy ending. We’ll at least have a fighting chance.

The secret to victory in battles with Satanic principalities and powers is simple but not easy: “Take up the full armor of God, so that when the day of evil comes, you will be able to stand your ground, and having done everything, to stand” (Ephesians 6:10-18). Brethren, don’t let the Adversary dishearten or stampede you or Portland will be America’s future: STAND!

FREE SPECIAL INVESTIGATIVE REPORT ON ANTIFA! What exactly is ANTIFA and what are its real goals? Why does it viciously attack America at every opportunity, prompting President Trump to label it a “domestic terror group”? WND is offering an original, in-depth investigative report on ANTIFA – absolutely FREE! Sign-up here for your copy of this powerful 22,000-word e-book exposing ANTIFA, which will be delivered to you immediately! 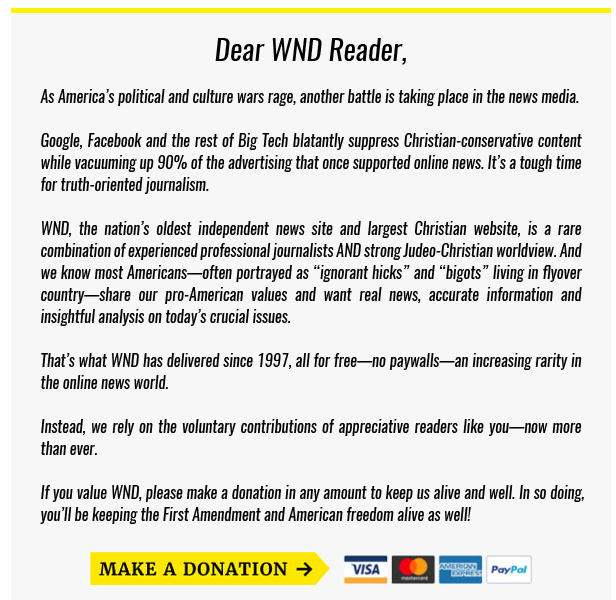