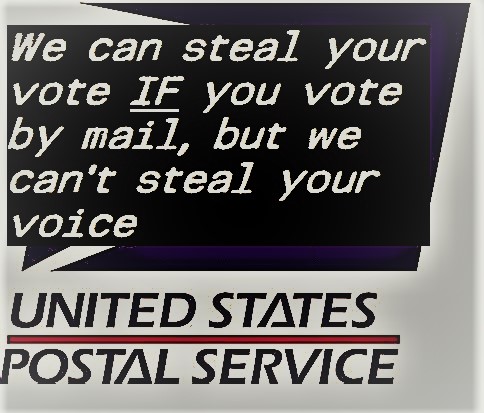 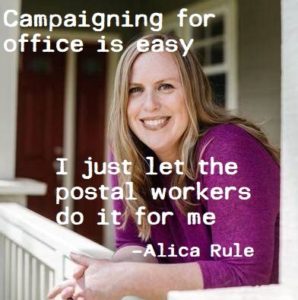 The debate about Vote by Mail during the Covid19 pandemic has been in the news lately.  It has been called “cheat by mail” by those concerned about the increased potential for fraud.  Supporters, on the other hand, suggest Vote by Mail is necessary in the Covid19 lockdown era.  However, some recent examples of postal workers in Washington State apparently using their unique job handling ballots as a way to directly influence elections has raised some serious concerns and a whole new dimension of the vote by mail debate. 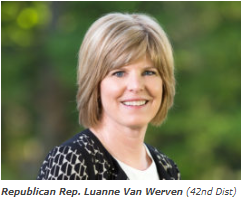 Washington State has been entirely vote by mail since 2011, but most of the 39 counties started vote by mail in 2005, which was different than the absentee voter process, which had been allowed for some voters.  The 2005 transition to vote by mail became legal due to changes enacted by the legislature after the 2004 Rossi/Gregoire voting fiasco and multiple recounts which were originally won by Republican Dino Rossi until a final “misplaced” box of ballots was discovered in King County and suddenly Democrat Christine Gregoire won and then re-counting was stopped, of course.  Washington State’s primary election this year is held on August 4th.  However, since the state is entirely vote by mail, the ballots were mailed last week to all registered voters weeks in advance (in King County, sometimes voters get 3 or more bonus ballots – but nobody knows why).

Many state legislative seats are contested this year.  In the 42nd Legislative District located in Whatcom County, which is the county located furthest to the North, bordering Canada, incumbent Republican State Legislator Luanne Van Werven is defending her seat from Democrat challenger Alica Rule.  A few days ago, Alica Rule made the nearby post on her Facebook account bragging about how she appreciated the endorsement she had received from the postal workers union and how they helpfully wrapped the ballots with her campaign literature and delivered the ballots with just her campaign literature attached.  Nice.

Think about that and the work and coordination that went into this little project.  The postal workers had to sort out the ballots, match them to the Democratic campaign literature, fold it around the ballot and attach it to the ballot itself.  Then they had to deliver this.  They had to do this to tens of thousands of ballots.  It took multiple people to do this.  Someone in the post office (or at the Democratic Party? Is there a difference anymore?) had to suggest they do this.  Could you even imagine the volcanic display of outrage, riots, arson, broken windows, and self-destructive insanity that would “spontaneously” erupt at all the “peaceful” protests throughout America if this was done with Trump literature?  This is just absurd, biased, and corrupt behavior by Federal public employees.  What’s worse is the fact that Democratic Party politicians brag about it and post it on their Facebook because they expect it and believe it is their right.

There are no limits because the ends justify the means 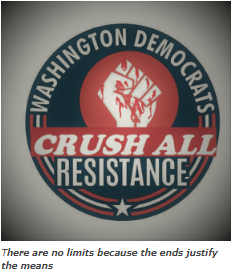 Based on reports throughout Whatcom County (see just a few posted on the same politicians Facebook page below), it appears the postal workers did this with a large number of these ballots – only with the Democrat’s campaign literature.  Let’s consider this for a moment.  The very government employees we are supposed to trust with our ballots and votes, are using their unique government paid position to assist, promote, and “endorse” their preferred Democratic Party candidate.  If you were a Republican would you trust these guys to not conveniently “lose” your ballot?  Or perhaps just delay it, so that it arrives too late to count (they can just use this Postmaster General suggestion to “leave mail behind” in the area of quarantine and lockdown)?  How often does THAT happen?  Who knows?  The insiders apparently think this is just how the game is played.

Not the first time Postal Workers have interfered in elections

Supposedly it is illegal, but is it tampering if you help Democrats? 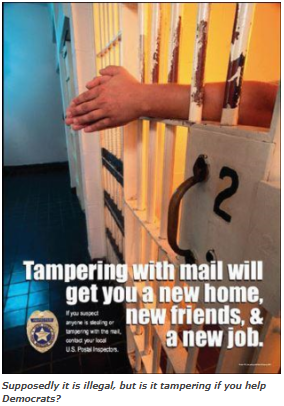 This exact scenario occurred just a few months ago in King County (where the City of Seattle is located) last November when a political mailer destined for the voters of the City of SeaTac was mysteriously “delayed” 7-9 days so that it arrived AFTER election day, rather than before.  Conveniently, it was a “conservative” flier that the Democratic Party would not like.  The Postmaster Inspector General was contacted about that incident.  I referenced it in an article (linked here) at the time.  It appears that some mystery postal employees at the Seattle Post Office Distribution Center somehow conveniently “misplaced” just this entire batch of mail and delayed it.  Just for a week.  Just until the election was over.  The investigation by the Postal Inspector couldn’t explain how this happened.

Seattle isn’t exactly a friendly place to Republicans or conservative causes.  Most of the workers in the post office there probably reflect that political climate, so it doesn’t take a lot of imagination to realize that their politics could very well interfere with how they do their job.  This is particularly true when they know there will be no consequences, and there were none for them in that case.  How many times has this happened before and nobody even noticed?

The current situation in Whatcom County where ballot tampering and manipulating the ballots being mailed by wrapping select campaign literature around them and attaching select campaign material to the ballots is probably a bit more serious.  This raises obvious concerns that the fix is in.  The postal workers have made their endorsement, and they will use their position to game the vote.  Maybe lose or conveniently delay or misplace a few key ballots from known Republican districts and voters?   Multiple elections in this same legislative district in 2018 were decided by just a handful of votes and an incumbent Republican state legislator was replaced by a Democrat in a closely fought race (see results here).  That achievement is made much easier when you have the postal workers in your partisan pocket. 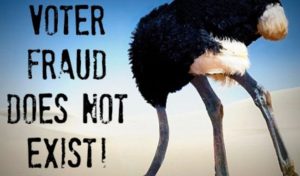 Does anyone NOT see the obvious problem  here?  How can we trust the mail-in-voting/ballot system at all if the government workers we rely on to handle the ballots are gaming the system for their preferred candidates?  Or Party?  Who cares why they are doing it?  It appears they are and they are so bold that the Democratic Party’s legislative candidate is openly bragging about it on Facebook and proud of the manipulation.

Forget about the traditional vote fraud games.  You don’t need to waste the energy for that if you can  control the mail and manipulate the results from the inside.  It is far easier if you can just sort the ballots with your friendly partisan postal workers and rig the vote before the ballots even get to the auditor’s office.  No sweat and a lot easier.

It didn’t count if the Postal worker got to it 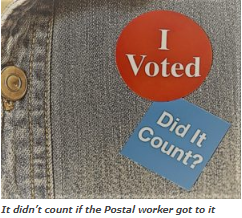 Until we can confirm otherwise, it would seem prudent to presume the postal service is politically corrupt.  At least in Washington State, where it matters.  Probably not all of it, but it obviously doesn’t require everyone to be in on the con game.  Even a handful of key partisan employees can make a huge difference.  It would be nearly impossible to effectively audit, it would never be transparent, and it is close to impossible to prevent.  Certainly it can’t be stopped before this primary election.

Obviously, this case will initiate some Federal investigations to flounder forward.  I’m filing a formal complaint with the Postal Service, just like what happened in SeaTac, but I’m skeptical they can do anything before the primary election.  In the meantime, here are some practical suggestions for voters in Washington State:

It’s more broken than we thought…

For those who live in a state where you don’t have all mail in voting – don’t go down this ugly road.

This is just one more weakness of the system and when it comes to politics and the political process, we must have an election system without so many critical points of failure and potential corruption.  The mail-in voting system is based, to a large extent, on the trust we place in the postal system.  When that becomes corrupted and untrustworthy, mail in voting can’t honestly work at all. 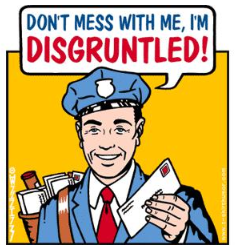