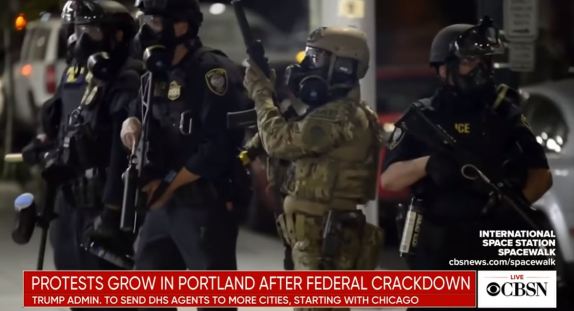 “You will undoubtedly be insulted, abused and perhaps assaulted, to which you must pay no attention whatever, but march with your faces square to the front, and pay no attention to the mob, even if they throw stones, bricks, or other missiles; but if you are fired upon, and any of you are hit, your officers will order you to fire. Do not fire into any promiscuous crowds, but select any man whom you may see aiming at you, and be sure you drop him.” Col. Edward F. Jones, 6th Massachusetts Regiment, as his regiment traveled through Baltimore, Maryland on April 19, 1861.

As History.com explained, in 1861 Secessionist sympathy was strong in Maryland, a border state where slavery was legal, and an angry mob of secessionists gathered to confront the legitimate government’s troops passing through the city:

Hoping to prevent the regiment from reaching the railroad station, and thus Washington, the mob blocked the carriages, and the troops were forced to continue on foot. The mob followed close behind and then, joined by other rioters, surrounded the regiment. Jeering turned to brick and stone throwing, and several federal troops responded by firing into the crowd. In the ensuing mayhem, the troops fought their way to the train station, taking and inflicting more casualties. At the terminal, the infantrymen were aided by Baltimore police, who held the crowd back and allowed them to board their train and escape. Much of their equipment was left behind. Four soldiers and 12 rioters were killed in what is generally regarded as the first bloodshed of the Civil War.

Maryland officials demanded that no more federal troops be sent through the state, and secessionists destroyed rail bridges and telegraph lines to Washington to hinder the federal war effort. In May, Union troops occupied Baltimore, and martial law was declared.

While they appeared to wish to maintain law and order, Baltimore’s Marshal George P. Kane and Mayor George W. Brown would both later be jailed by the Union army for pro-rebel activities.

In actions eerily reminiscent of those of public officials during and after pre-Civil War Baltimore’s “Pratt Street Riot,” Portland city and Oregon state officials have taken the side of anti-government insurgents and, even worse than their Confederate-sympathizing Democrat antecedents, they have not only joined the rebel side, but have refused to keep and maintain order, in what was formerly one of the jewels of the Pacific Northwest.

Today, after years of street violence by ANTIFA and more than 51 days of violent insurrection by ANTIFA and BLM thugs, including attempts to set fire to the federal court house and the offices of the Portland Police Union, Portland’s city center is a burned-out wreck. However, rather than act to preserve order Portland Mayor Ted Wheeler, Oregon Governor Kate Brown and Oregon Attorney General Ellen Rosenblum have, in effect, joined the Confederacy.

While President Trump, through the Department of Homeland Security and the Department of Justice is trying to restore order in Portland, Mayor Wheeler has demanded federal officers leave the city, accusing them of abusive tactics against the insurrectionists.

Speaking to CNN on Sunday, Mayor Wheeler said there were “dozens if not hundreds of federal troops” in the city, adding: “Their presence here is actually leading to more violence and more vandalism.

“They’re not wanted here. We haven’t asked them here. In fact, we want them to leave,” he said.

Governor Brown told MSNBC that she had asked the federal government on Tuesday to remove the officers, saying: “You are escalating an already challenging situation.”

In the lawsuit, Democrat Ellen Rosenblum requested a restraining order to stop agents from the Department of Homeland Security, US Marshals Service, US Customs and Border Protection and the Federal Protection Service from making any more arrests in the city.

“These tactics must stop,” Ms. Rosenblum said in a statement reported by the BBC.

According to the BBC report, the lawsuit claims the actions of federal officers violated protesters’ ability to exercise their constitutional First Amendment right to assembly and, by seizing and detaining people without a warrant, also breached the Fourth and Fifth Amendment right to due process.

The officers, the BBC reported are part of a new Department of Homeland Security unit made up of people from the US Marshals Service and Customs and Border Protection, have been deployed under an executive order protecting statues, signed by Mr. Trump last month.

The executive order, which says anyone who damages a public property must be prosecuted to the “fullest extent of the law,” allows federal officers to be deployed without the permission of the state.

“I offered DHS support to help locally address the situation that’s going on in Portland, and their only response was: please pack up and go home,” said acting Homeland Security Secretary Chad Wolf in an interview with Fox News, adding, “That’s just not going to happen on my watch.”

We applaud Acting Secretary Wolf for recognizing that what has been going on in Portland since 2016 is not a “protest” nor is it a mere failure of leadership by Portland Mayor Ted Wheeler, Oregon Governor Kate Brown and Oregon Attorney General Ellen Rosenblum. Rather it is another example of Democrats literally going over to the other side and joining the enemy in a rebellion against the lawful authority of the United States, and it should be treated as such.