The lies behind the George Floyd case 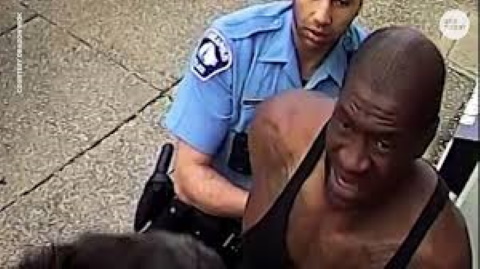 The lies behind the George Floyd case

The George Floyd riots that resulted in $500 million worth of damage to Minneapolis were based on a lie. With more evidence now available, one possible verdict is that the drugs in his system contributed to his death, as he was out of control and resisted arrest.

Transcripts of police body camera recordings of the confrontation demonstrate that George Floyd, the so-called “gentle giant,” was foaming at the mouth and so out-of-control that the police had no alternative but to pin him down with a knee to the neck, an acceptable police procedure when a suspect goes berserk. A legal memorandum in the case, seeking dismissal of the charges, was filed by an attorney for one of the officers and incorporates the facts from the body cameras: “Floyd had just committed a felony, he was not being cooperative, and appeared to be under the influence of drugs. There was a lengthy struggle to get 6 foot four, 223 pound Floyd into the car.” (Other reports put Floyd’s height at 6 foot six or seven). He was 46 years old.

With new evidence showing the police acted properly, the charges could be dismissed. If they are not, we can anticipate not-guilty verdicts in a fair trial that will be exploited to further feed the fires of racial animosity at the hands of the Black Lives Matter agitators. Or else the trial will be rigged and police will be framed for crimes they didn’t commit, in order to tamp down the potential for more riots.

These are the stakes as the new evidence has emerged, throwing into doubt the charges of murder and aiding murder filed against the four police officers.

A video snippet of the last part of the encounter, the knee on the neck, is what became the excuse for the riots and the current national hysteria over “Black Lives Matter,” whose name conceals a Marxist political agenda that aims to leave Americans defenseless as police departments are defunded. The liberal governor of Minnesota, Tim Walz, has imposed draconian restrictions on the movements of ordinary people, but failed to protect Minneapolis when it was burning and a police headquarters was abandoned and ransacked. The federal government has rejected his request for a financial bailout.

In a sensitive case like this, at the time of the incident, there was a need for deliberation and calm. But people jumped to erroneous conclusions, in the same way the Michael Brown “Hands up, don’t shoot” case in Ferguson, Missouri, turned out to be a case of a young black man high on pot reaching for a police officer’s gun and getting shot and killed in the process.

The George Floyd case became the second go-round for the national effort to ignite a race war in America. It is working, thanks to commentators and politicians who jumped on the anti-police bandwagon. This time, “Hands up, don’t shoot,” has been replaced by “I can’t breathe.” But an objective observer could conclude that Floyd couldn’t breathe because of too many drugs in his system and his delirium when facing arrest. (Floyd family attorney Ben Crump says the presence of drugs in his system when he died is a “red herring” designed to draw attention away from the police conduct.)

Regarding the kneeling on Floyd by one officer, after futile efforts were made to get Floyd into the police car, that particular neck restraint was used and “was something taught to officers.” The report says that based on Floyd’s actions up to that point, “the officers had no idea what he would do next – hurt himself, hurt the officers, flee, or anything else, but he was not cooperating.” What’s more, it says the force used by officer Derek Chauvin by kneeling was not substantial, in that “there were no physical findings of asphyxia.”

In other words, contrary to what most media have reported, Floyd was not strangled to death by the knee to his neck. The knee was not responsible for his inability to breathe. That inability was caused by the drugs and his own uncontrollable behavior, as he worked himself into a frenzy. At one point, an officer asks Floyd about foam around his mouth, and he replies, “I was just hooping earlier.” This is a possible reference to taking illegal psychoactive drugs through the rectum. He may have been overdosing, which can cause foaming at the mouth. Or he could have been referring to something else.

What people did not see in the video released to the public was that Floyd, after passing the bad $20 bill, was first spotted in a car “digging underneath the seat, as if reaching for something.” It could have been a gun, drugs, counterfeit bills, or something else. The officers attempted to get Floyd into the squad car and told him multiple times to take a seat. He was said to have repeatedly kicked at the officers.

“Floyd does not take a seat and starts saying he is going to die,” the memo says. As the strange behavior continues, one officer says, “he’s got to be on something.” Floyd “started to thrash back and forth” and “was hitting his face on the glass in the squad [car] and began to bleed from his mouth.” He got out of the car and officers “ended up bringing Floyd to the ground after the struggle to get him in the car because Floyd was out of control.” One officer finds a pipe, a smoking device for illegal drugs. “He’s got to be on something,” the officer observes. Another sees his eyes shaking, probably a reference to the rapid quivering of the pupils, another sign of drug abuse.

The manager of the store where Floyd passed the funny money concluded that Floyd and his friends seemed “high off stuff.”

During the melee, the police called for an ambulance. They understood Floyd was in a drug-induced state and needed help. But he died before he could be revived.

People could have mourned the tragic death of Floyd without the anti-police hysteria that resulted in riots and disturbances in major cities. These have now expanded from “police reform” into demands for America’s founding fathers to be demonized and statues of them destroyed. One death, which we now know was caused by extensive drug use, ignited all of this. It sparked a carefully-planned Maoist cultural revolution that includes calls to destroy pictures and statues of “white Jesus.”

Conservatives contributed to this madness, as Sean Hannity of Fox News and politicians such as Senator Ted Cruz immediately condemned the police handling of the incident without waiting to get all the facts. Republican Senator Mitt Romney actually marched with Black Lives Matter in Washington, D.C.

Radio host Rush Limbaugh went so far as to conduct an “exchange” with the black radio host “Charlamagne Tha God,” to see if black-white racial harmony could be achieved in light of what the police had done to Floyd. The exchange was a disaster. Dialogue was not what black activists were looking for. They wanted white apologies over “white privilege” and police charged with murder and aiding murder.

Soon after the incident, another video snippet surfaced, appearing to show Floyd scuffling with police in the police car, but few waited for the facts behind that part of the confrontation, either. Now we know he resisted arrest in a drug-induced rage. Then, an autopsy showing Floyd’s heavy drug use and the facts about his criminal record were conveniently overlooked to keep the anti-police narrative going.

“What is not being told is the violent criminal history of George Floyd. The media will not air this,” said Minneapolis police union president Bob Kroll at the time. Kroll was dismissed, however, as just an apologist for members of his union and the officers he represents. Some called for him to go because he dared to highlight some damaging truths about Floyd, including his four years in prison for aggravated robbery.

In summary, the new evidence shows that George Floyd was being arrested for a legitimate reason—passing counterfeit money—but behaved erratically and was perceived to be high on drugs. His blood tests found evidence of marijuana, fentanyl, and methamphetamine. He was difficult to calm down, apparently because of the drug use, and kept claiming that he couldn’t breathe, a possible sign of hyperventilation caused by the drugs.

But now that exculpatory evidence for the officers has emerged, the judge in the case, Peter Cahill, has imposed a gag order on the attorneys for the police.