Get Ready For The “Rainbow Nation” Of America 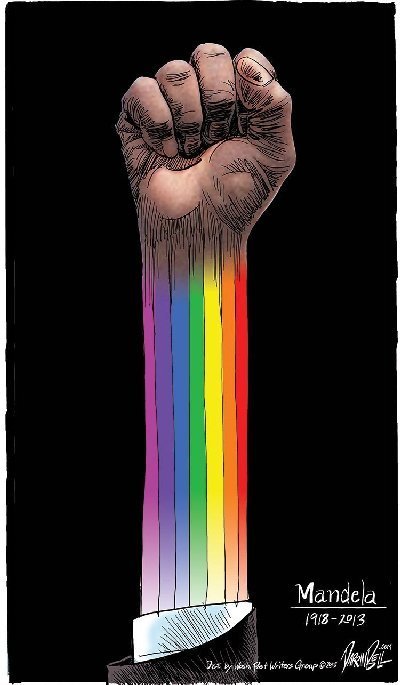 Get Ready For The “Rainbow Nation” Of America

It’s “Nelson Mandela International Day,” designated as such by the United Nations, on July 18. Look for Nelson Mandela statues to be erected in place of George Washington. (There’s already one at the U.N.). But in the same way the founding of the U.N. by communist spy Alger Hiss is routinely ignored, we will not be told that Mandela was exposed as a member of the South African Communist Party and that whites are now fleeing the workers’ paradise he created.

Meanwhile, Barack Hussein Obama’s former Ambassador to South Africa, Patrick Gaspard, who is now the president of the Open Society Foundations of George Soros, has announced a staggering grant of $220 million for black power movements, “placing a bet on their ability to carry today’s momentum toward a better tomorrow.” That’s on top of the admitted $15.2 billon the billionaire hedge fund operator has already provided to various Marxist and “progressive” forces.

Conservatives have focused on the amount of money rather than the credentials of the strategist. It is significant that Patrick Gaspard was Obama’s Ambassador to South Africa, already considered a “Rainbow Nation” where communists rule. A member of Obama’s inner circle, he had served as Director of the White House Office of Political Affairs, the executive director of the Democratic National Committee, the national political director for Obama for America in 2008, and lobbyist for the Service Employees International Union (SEIU).

As an eyewitness to what is happening in South Africa, Gaspard understands how a communist regime can take power through the democratic process.  Of course, the communist government there is attracting and exploiting the votes of the majority black population. Whites are facing discrimination and fleeing, being persecuted, and/or being killed. In the U.S., at least for the time being, whites are still a majority.

The key to the Soros/Gaspard strategy is to shame enough whites into joining the communist coalition.  These are the “progressive whites” caught up in the George Floyd protests. Through one of the most skillful propaganda campaigns ever launched, the cops in the Floyd case were portrayed as cold-blooded killers when in fact they were confronted with a career criminal high on drugs who was foaming at the mouth and resisting arrest. Evidence in the case, as I document in the column, “The Lies Behind the George Floyd Case,” exonerates the police of the horrendous charges of murder and aiding murder that has been made against them.

Published on December 13, 2013, after Obama’s election to a second term, author Rick Nagin said communist revolutions go through various stages and that, in the U.S., the “Democratic parts of the ruling class” were “still very much needed” for communism to succeed here. Nagin, a veteran Communist Party official, urged support for President Obama and “the Obama coalition,” in order to prevent division in the ranks of the progressives. He said to “win at this stage we need to emulate the steadfastness and political maturity shown by Mandela and the South African Communist Party.”

Obama delivered the 16th Nelson Mandela Annual Lecture at the Wanderers Stadium, Johannesburg, July 17, 2018, and said, “I believe in Nelson Mandela’s vision.” He wrote the foreword to the 2010 book, Nelson: Conversations with Myself, by Mandela.

Obama’s key ally in Congress was House Speaker Nancy Pelosi. “I think Nancy Pelosi, when the history is written, will go down as one of the most effective legislative leaders that this country’s ever seen,” Obama said.

In this context, the name of Dr. Carlton Goodlett is significant. A communist associate of the Peoples Temple cult leader Jim Jones, whose more than 900 followers committed “revolutionary suicide” in Guyana in 1978, Goodlett was a Lenin Peace Prize winner and a central figure in the Democratic Party in San Francisco. Incredibly, there is a street in San Francisco, Dr. Carlton B Goodlett Place, named after this communist, where City Hall is located. House Speaker Representative Nancy Pelosi praised Goodlett after his death as a civil rights leader.

Pelosi, of course, is still running the House, while Obama is officially out of office.

President Trump’s real opponent isn’t Joe Biden, but Obama, who operates mostly behind the scenes. Gaspard understands that as long as Trump continues to talk about Biden, rather than Soros and Obama, the strategy to create a “Rainbow Nation” in America may succeed.

“Obama’s victory was more than a progressive move; it was a dialectical leap ushering in a qualitatively new era of struggle,” wrote Marxist activist Frank Chapman, a leading member of the pro-China Freedom Road Socialist Organization who recently showed up in Minneapolis to join the protests. “Marx once compared revolutionary struggle with the work of the mole, who sometimes burrows so far beneath the ground that he leaves no trace of his movement on the surface,” he said. “This is the old revolutionary ‘mole,’ not only showing his traces on the surface but also breaking through.”

Obama and Gaspard provide the brains, Soros gives them money, and Chapman and their comrades are the cannon fodder for the street revolution. Biden is their frontman.