The Central District Health oversight board has approved an order that requires all people in Ada County to don a face mask.

Those who violate the order could face up to six months in jail and a fine of not more than $1,000. The mandate took effect immediately upon Tuesday afternoon’s vote and has no end date.

It’s unclear how Central District Health will enforce the mandate.

CDH’s order exempts kids under the age of 2, those with physical health problems that prevent them from wearing a mask, those with mental health conditions that prevent compliance, hearing impaired, those who would take an extra risk on the job by wearing a mask, those eating and drinking at restaurants, and those who need to obtain certain services.

Blanksma, who represents Elmore County on the CDH board, also voiced concern that the mandate could create confrontation and tension among community members. Instead of heavy-handed enforcement, Blanksma suggested board members examine extensive public education campaigns.

“We’re just not getting there,” Lachiondo said.

Lachiondo assured her colleagues that law enforcement personnel will “lead with education” before handing out misdemeanor charges.

The commissioner briefly pondered expanding the mask mandate to the three other counties in CDH’s jurisdiction, but declined to do so.

Boise implemented a similar order earlier this month, but other Ada County cities declined to do so. Meridian Mayor Robert Simison signaled his support for the CDH mandate prior to Tuesday afternoon’s meeting.

Read the finalized order below: 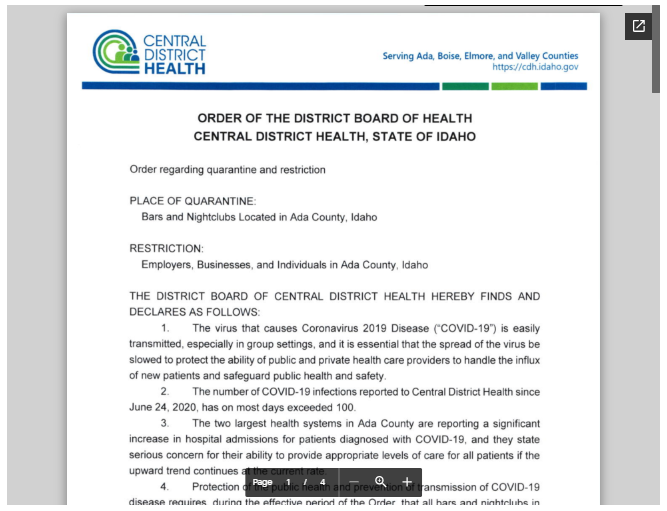