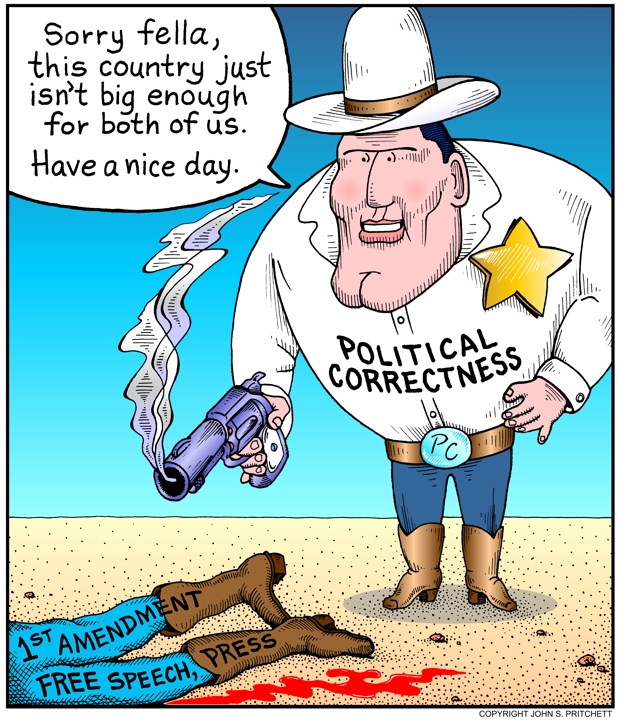 It seems the P.C. police want to finish the re-write of American history. Statues are being torn down, places re-named, U.S. military bases are being asked to change…the list is endless.

So, all reference to President U.S. Grant must be removed- Grant owned a slave and his wife owned four. Grant also had an unpaid black “servant” during the Mexican war, and Grant is reputed to have said “good help is hard to find” when asked why he kept him. All statues, his tomb in New York, his plantation in Missouri, all must be destroyed.

For fans of Lewis and Clark, the same applies. A black slave named York, owned by Clark, was with Clark for the duration of the expedition. In the state of Washington, Lewis County, Clark County, every river, town, the fort at Astoria, all must be expunged.

The National Park Service (NPS) must burn Mount Vernon, bulldoze the buildings, plant natural vegetation, and make it into a Peoples Peace Park. The Washington Monument will make a thrilling fireworks show when it is imploded, erasing this stain on our history.

As long as the demolition teams are there, the Jefferson Memorial should come down- we can’t have relics of slave-owners on the Washington Mall. Once done there, they can head down to Monticello, Jefferson’s home in Virginia, and eliminate it, too. Burn the buildings, blow up all statues, and destroy all memorabilia of that deplorable man. That would mean also destroying the Virginia state capitol and the University of Virginia, since Jefferson designed and help build those…some with slave labor.

The NPS can then move on to National Battlefields: Gettysburg, Vicksburg, Antietam, Fredericksburg and the others where Confederates fought and died. The statues of the glorious Union soldiers can stay, but all the rest must go. One Yankee, though, must also be expunged- George Custer. Even though Custer stopped J.E.B. Stuart from flanking federal forces at Gettysburg, and stopped Robert E. Lee at Appomattox, he went on to destroy many Native Americans, so his memory must be expunged, too.

NPS battlefields in urban areas can be re-purposed into low income housing. Those in other areas can be turned into homeless camps, with shelter, food, and water for the disadvantaged. In none of these areas will there be police protection, since the U.S. Park Police and NPS law enforcement rangers will be defunded. The only enforcement will come from the People’s Thought Police.

If we take these modest steps, we may be able to begin to address the systemic racism that pervades this country. We can all turn in our guns, hold hands, and join the Brave New World.

J. J. Hall has fifty years of military, law enforcement, martial arts, and teaching experience, retiring as a lieutenant from the Alaska State Troopers. He has extensive training and experience in SWAT and in training. As a trooper, Hall worked narcotics, patrol, traffic, a one-man “bush” post, FTO and FTO sergeant, governor’s security, as a canine handler and as a major-crimes investigator; his last assignment was as the commander of the state training academy. Hall has been a POST-certified firearms and defensive tactics instructor since 1982. He has been a full-time trainer since retiring, teaching police, civilians, and military (Marine SOTG, 160th SOAR, Rangers, etc.)

Hall is a Handgun Combat Master, Four Weapon Combat Master and NRA Distinguished pistol shooter.  Hall is a martial arts Grandmaster, holding black belt ranks in six martial arts, ranking from 3rd to 10th dan.  He holds third dans (sandan) in Ia Tate Do, Jiu-jitsu, and Okinawan Kobudo; fifth dans (godan) in Shudo-Kan and Gosoku-Ryu karate; and a tenth dan (ju dan) in Hojutsu-Ryu. He is the founder, or “soke”, of Hojutsu, the martial art of shooting. Hall has been inducted into numerous Martial Arts Halls of Fame and the International Circle of Masters. His primary interest is Integrated Fighting, the blending of hands, feet, sticks, knives, and all firearms into a blended, integrated fighting system. Hall has used the techniques and tactics he teaches in combat.

The story of an air-to-ground shooting in the Alaska wilderness, involving Hall, was featured on The History Channel’s “Snipers- Deadliest Missions”.  Hall has instructed Aerial Platform Shooting (APS) to state and local agencies (Mass. State Police STOP team, Phoenix, PD SAU), and others, and has taught internationally.

Hall was an NRA law enforcement staff instructor for twenty years, and teaches for the Alaska, Idaho, and Washington state P.O.S.T. commissions. Hall is an adjunct instructor at Thunder Ranch. He is the author of numerous articles in Tactical Weapons, SWAT, Guns and Weapons for Law Enforcement, PoliceOne.com, and others. He is the author of two books, Hojutsu-Ryu and The Survival Shotgun. He is a firm believer that the only path to success is hard, repetitive, disciplined training under the eyes of masters in any particular field, and that there are no shortcuts!

Hall is a court-recognized expert in Alaska, Idaho and Washington states in Use-of-Force, a graduate of the Force Science Analyst certification course, testifying for private citizens, police departments, and police officers accused of excessive force.