Politicians Need To Be Held Accountable 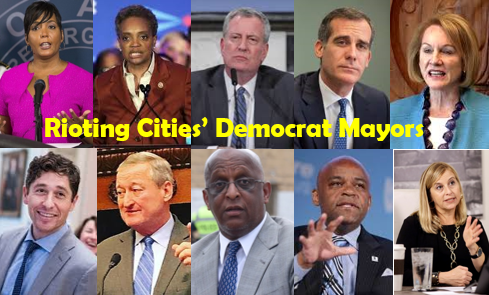 Politicians Need To Be Held Accountable

All politicians should be held accountable for misrepresenting the current crime wave going through their cities and states. As they continue their rampage to defund and reinvent the role of the police officers the crime rates continue to escalate.

Good police officers continue to be degraded and attacked in democrat led cities and states. What we are witnessing in this country are extreme viewpoints from the left. Politicians are continually turning a blind eye while allowing violence and mayhem to escalate in cities nationwide.

Attacks on innocent people also continue to erupt. Jessica Whitaker, mother of 3-year-old was shot and killed in IN when she or someone in her group said “All Lives Matter.”

The suspect’s group shouted Black Lives Matter. Whitaker or someone in her group replied that All Lives Matter. Initially the group argued, both sides were armed, so they both walked away.  The killer waited then opened fire from a nearby bridge and ran away killing Whitaker.

In Brooklyn, NY the death of a one-year-old boy and shooting of three others at a barbecue hardly represents “an economic downturn” As stated by Representative Alexandria Ocasio-Cortez. (D-NY) Murdering innocent babies, the acceleration of crime, along with the random shootings are hardly representative of someone who is hungry and simply shoplifting for bread from a grocery store.

Maybe this has to do with the fact that people aren’t paying their rent & are scared to pay their rent & so they go out & they need to feed their child & they don’t have money so… they feel like they either need to shoplift some bread or go hungry. Rep. Cortez (D)

NYC police officer was held in head lock while protesters cheered on. The criminal who did this received literally no consequences for the attack on this police officer. He turned himself in and was immediately released. Governor Andrew Cuomo, along with Mayor Bill De Blasio, has implemented policies that endanger the citizens of their state and have refused to support their law enforcement officers.  Shootings are up 358% in NYC.

St Louis, MO, chief prosecutor Kim Gardner has a long history of implementing dangerous policies and bazaar behaviors, all of which have occurred long before her recent pursuit of the McCloskeys. You may remember the McCloskeys? They were the couple in St Louis, MO who used the castle doctrine to protect their home and their lives against protestors.  They were served a search warrant and were later subjected to baseless harassment and threats by Gardner.

BLM attacked a group of Catholics praying at a statue in St. Louis.  In another incident, protesters surrounded city workers, who were sent to tow vehicles. They laid in the street and climbed on top of the city worker vehicle and they attacked the workers. One was hit with an assault rifle in the face and the other punched in the back of the head, according to the Director of Public Safety, Jimmie Edwards. Police officers have been attacked and murdered there since the riots began.

Federal officers are being used in Oregon in an effort to control and contain demonstrators in Portland. Two U.S. Senators, Ron Wyden (D), Jeff Merkley (D) along with the governor, Kate Brown (D) criticized President Trump for implementing the officers there. The mayor and most of the city council are silent.  Merkley (D) said, “We demand respect for Americans who have taken to the streets to raise their voices in peaceful support of the Black Lives Matters movement. No one should be intimidated or assaulted when they peacefully exercise their First Amendment rights.”

Protestors in Portland, Oregon threw commercial-grade fireworks at police officers along with rocks and other items, pointed lasers, and started fires.

Secoriea Turner, 8, Atlanta Georgia was shot and killed at the Wendy’s where BLM took over the area.  Police officers have been attacked and continue to be abused by rioters in GA.

“While law enforcement is a high-stress career, the last two months in Minneapolis have pushed many officers to their breaking point,” the officers’ shared attorney, Ron Meuser, Jr., said.

As a country, we need to defend not defund our law enforcement. We need to stand up against all the atrocities happening to law enforcement officers and any victim of crime.  We need to take a stand against any and all elected officials like Rep. Alexandria Ocasio-Cortez (D) with her ridiculous statements and obvious inability do differentiate between crime and hunger.

It is time for all American’s to unite. It is time politicians to stop the rhetoric in an attempt to win an election and create division. We need to stop killing one another and begin realizing where the root of all this evil starts. Together we can eliminate the infiltration of Marxist beliefs we are receiving from corporations, sports groups, politicians and anyone who is trying to dismantle our country. We can do this if we are united, divided we will fail; perhaps that is what the left is hoping for?

We all want the same things. We are a nation of law (s) and order. Maybe now is a good time to look to the left and look to the right then decide, after some soul searching, who is on the side of all American’s and who is not?