Determined Seattle councilwoman said the plan is to overthrow capitalism 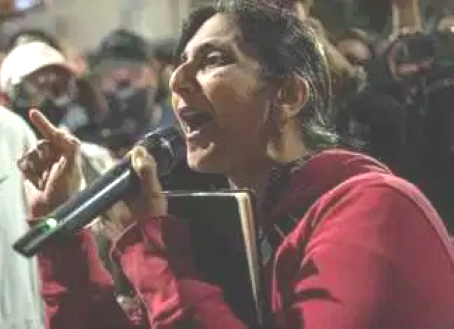 Determined Seattle councilwoman said the plan is to overthrow capitalism

Seattle city councilwoman, Kshame Sawant, was a leader of the recent CHOP zone activities. She led the CHOPeans to the mayor’s house to rally for their communist demands.

She won office under the banner of her Socialist Alternative Party, which is actually communist.

The émigré from India has a B.S. in computer science and a Ph.D. in economics.

In her victory speech about a tax leveled on Amazon, she praised the Marxist Black Lives Matter movement. She also boasted that she planned to overthrow the United States government and destroy the rich.

She stated she is “preparing the ground” for a “very different society.”

“We are coming to dismantle this deeply oppressive, racist, sexist, violent, utterly bankrupt system of capitalism, this police state,” she said at the end of her speech.

She added, “We cannot and will not stop until we overthrow it and replace it with a world based instead on solidarity, genuine democracy, and equality – a socialist world.”

Sawant lives in an alternative world but the movement is growing. Joe Biden recently adopted almost every communist goal Bernie Sanders laid out.