The Rotten Fruit of Anti-American “Education”

The Rotten Fruit of Anti-American “Education”

What did we expect? After decades of teaching kids in America to hate their country, take a good look around because we’re now seeing some rotten fruit of the education system. This generation of young adults generally has more disdain for America, but knows far less about actual U.S. history.

But they do know all about LGBT causes, climate change, Planned Parenthood, and Black Lives Matter. Education has become a weapon in the hands of progressives, atheists, and socialists who hijacked public schools and universities – and it’s all coming to a boiling point.

Now would be a good time to pray for God to intervene. During the recent protests, riots, and mob violence, communities have been destroyed, thousands have been injured, and many more lives have been lost forever. But these countless stories don’t fit the media narrative.

Historic statues are being defaced or torn down. Instructions were even sent out on how to topple monuments. The occupation of some of those facing felony charges across the country? School teachers. No, the current chaos and division are not all the fault of government-run education, but decades of groundwork has been laid poisoning a generation.

The United States is in the process of being fundamentally and radically transformed as socialism has made much progress. Our great grandparents once said “It could never happen in America.” But it did – and we’re now living with the consequences of surrendering the education of our children.

The left says we’re an evil nation of systemic or “institutional racism.” Joe Biden is campaigning for change! But he’s been in elected office since 1972. If it’s true we’re racist, think about this: Democrats control every major institution in America including the mainstream media, administrative government, Hollywood, and big tech.

Surveys indicate students have been told what to think, especially when it comes to politics, religion, history, and morality. In a recent Monmouth University poll, 58 percent of respondents with a four-year degree said rioting and vandalism are either “fully or partially justified” because of racism. Another poll showed 62 percent of young people are okay with looting, which is theft of someone else’s property! Hard working people’s lives are being destroyed wherever there’s a major protest.

Then there’s the utter destruction and rebellion. I wouldn’t expect most people under 35 to know this, but Matthias Baldwin was a Christian and abolitionist that lobbied against slavery for three decades. Ironically, Black Lives Matter protesters vandalized a statue of Baldwin in Philadelphia.

A college professor at the University of Alabama actually provided on-line instructions on how to tear down monuments that allegedly promote nationalism and racism. Sarah Parcak tweeted a detailed description of how to pull down a monument, complete with a Black Lives Matter hashtag and advice to “let gravity work for you,” watch it topple, and get out of the way.

Next, a junior-high teacher is facing felony charges after being arrested for the destruction of a confederate monument at the University of Mississippi. The suspect has been identified as former UM graduate, Zachary Borenstein. A fundraiser was launched to bail him out. Arielle Hudson, a 2016 UM graduate said Borenstein was arrested “after making a strong stance against oppression and racism.” More than 600 donors contributed to raise $20,000 for the felon.

And what solution did the school chancellor come up with? Move the monument somewhere else.

In the southwest, the University of Arizona offers students academic credit for internship with anti-capitalist, far-left extremist groups. An arm of Black Lives Matter, The Alliance for Global Justice is one option listed under the university’s Public Management and Policy Internship’s site. Part of its campaign is to Defund the Police.  Another project co-funded by the alliance, Refuse Fascism, actively works to overthrow President Donald Trump and Vice President Mike Pence.

This is part of the modern university system.

It’s clear, the roots of anti-American indoctrination began over 75 years ago at our universities with the help of Fabian socialists coming over from Europe and in public schools with the help of atheists such as John Dewey, the Father of Modern Education. This virus has now spread into all levels of learning. Radical professors attack the ideals of western civilization and especially the Judeo-Christian values America was founded upon.

Please understand, I was raised in a family of teachers; from both parents to my sisters to an uncle and cousin, so I understand most had good intentions and truly cared about children. But today, it’s obvious the system has been hijacked by the left and is practically an arm of the Democrat Party.

Since God, voluntary prayer, the Bible, and the 10 Commandments were expelled decades ago, truth has been redefined, emotion and experience are supreme, social justice activism is expected, text books have been rewritten, and history will never be the same.

Education has been weaponized by radicals and used to chip away at what this country used to be. Under code words such as diversity, inclusion, health, equality, sex education, tolerance, white privilege and wokeness, most schools proudly promote anti- Christian and anti-American ideas.

So who has this very influential weapon been used against? Jesus, the truth, biblical morality, conservatives, the church, America’s founders, Republicans, and the Judeo-Christian principles this country was established upon. I’m not saying there aren’t some good teachers out there, but their hands are tied and their frustrations are at a tipping point – just like our culture.

As government schools help stoke anti-American cultural fires, the homeschooling movement is rapidly growing for obvious reasons. Public schools have become toxic. Yes, some students do escape with their worldview intact, but after years of secular instruction, the majority are thoroughly programmed to conform to the world.

The only solution is the gospel of Jesus Christ. Individuals can still be saved, but education and major institutions as a whole are past the point of redemption or reform. They are anti-Christ. The battle lines have been clearly drawn and we better stay strong in the Lord and understand the times. 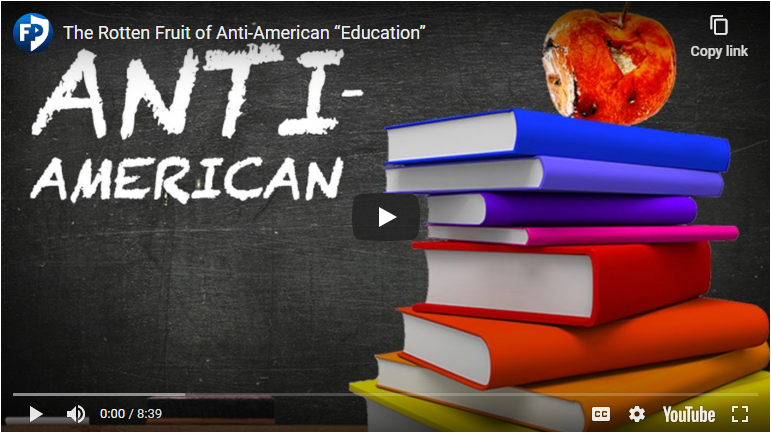