Barack Hussein Obama is running for a third term 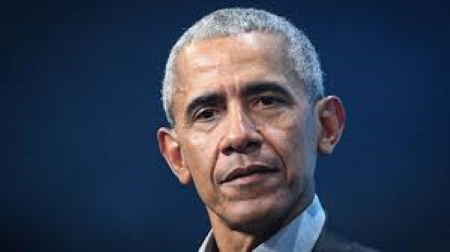 Barack Hussein Obama is running for a third term

President Trump’s Independence Day speech at Mount Rushmore was a good first step, but he must now identify the enemy by name – Communist China. We are at war. The China virus has been followed by riots instigated by pro-Chinese groups in our major cities. Meanwhile, China has taken Hong Kong, and its sights are set on the United States. We could drop into their hands like overripe fruit. Those are the stakes.

Let’s not be confused by disinformation in the New York Times and the Washington Post about Trump’s “dark” and “divisive” speech. He didn’t start this war. He is playing defense. The media want him to surrender to the revolutionary mob.

Candidate Joe Biden, a shell of a man with no coherent ideas of his own, is the vessel for our domestic enemies with foreign ties to take control of the federal government and reduce the once-great United States to warring factions unable to stop Red China’s worldwide advance. Biden is promising peace and harmony, but he is only a front man for the same forces behind Barack Hussein Obama’s movement for the “fundamental transformation” of America. Obama visited with Chinese President Xi after Obama left office, in a meeting of “veteran cadres,” or communist officials, discussing current events. “Xi made a positive appraisal of Obama’s efforts in promoting China-U.S. relations during his presidency,” said the Chinese press.

That was ominous, but our media showed no interest. Yet this helps explain why Trump’s anti-China policies were a trigger, not only for the Russia-gate hoax, but for coronavirus and the most recent protests and riots.

One thing is clear: Obama and his people are calling the shots, literally, behind the Biden for President campaign. Obama wants a third term in office, and he may get it, using Biden as his front man. He will then reinstate his China-friendly policies.

Why, President Trump has to ask, did U.S. Customs and Border Protection (CBP) officers seize a shipment from China that contained over 10,000 assault weapons parts being smuggled into the country? The parts were seized at Express Consignment Operations hub in Louisville, Kentucky, in a parcel described as containing 100 Steel Pin Samples. On a separate occasion, more than 5,000 counterfeit driver’s licenses and 2,909 counterfeit IDs were seized there. They also came from China and were headed to New York.

All of this looks like China is outfitting a communist insurgency on American soil. The Red Chinese are already killing our people through exports of fentanyl.

Looking at their political operations, Trump said, “One of their political weapons is ‘cancel culture’ – driving people from their jobs, shaming dissenters, and demanding total submission from anyone who disagrees. This is the very definition of totalitarianism, and it is completely alien to our culture and to our values and it has absolutely no place in the United States of America.”

Strangely, some Senate Republicans have joined the ranks of the opposition, with Senator Mike Braun endorsing handcuffing the police through frivolous left-wing lawsuits. As Trump said, we must support the police, not weaken them in the face of the communist advance.

Trump said, “The radical ideology attacking our country advances under the banner of social justice, but in truth, it would demolish both justice and society. It would transform justice into an instrument of division and vengeance, and it would turn our free and inclusive society into a place of a repression, domination, and exclusion. They want to silence us, but we will not be silenced.”

That “radical ideology” is communism.

“In our schools, our newsrooms, even our corporate boardrooms,” Trump said, “there is a new far-left fascism that demands absolute allegiance. If you do not speak its language, perform its rituals, recite its mantras, and follow its commandments, then you will be censored, banished, blacklisted, persecuted, and punished. It’s not going to happen to us.” But it is happening, as the election quickly approaches.

Using the term “far-left fascism” to refer to the self-proclaimed anti-fascists is a smart technique rhetorically on Trump’s part. It’s irrefutable that fascism lies on the same side of the political spectrum as communism, and we saw how a fascist-communist alliance sparked World War II, before these two totalitarian ideologies turned on each other, and America went to war to save Europe. The “Refuse Fascism” group, active in a dozen American cities, is actually a front of the Maoist Revolutionary Communist Party.

Political censorship and communist-style mind control are being exercised through academia and the media, and much of it is financed by corporate America. This trend is commonly called political correctness and “cancel culture.” In truth, this is Cultural Marxism, an actual movement determined to “make America stink,” with roots in communist thinking.

On an important level, America’s cities are threatened by these communists in the streets who can’t be stopped with ten-year jail terms for toppling statues. They will probably be sprung from jail by left-wing lawyers anyway and given reduced sentences by liberal judges. But our FBI and CIA can expose their ties to Beijing. That would give our law enforcement authorities more legal weapons in order to close these demonstrations down. These are foreign agents, at the very least, and some may be operating at the direction of the Chinese Communist Party.

Analyst Trevor Loudon has done a very good job of analyzing this problem in his latest piece, “People’s War:’ Pro-China Communists Claim Credit For ‘Sparking’ U.S. Riots.” He names the names and identifies their foreign connections. He explains, “Developed by Chairman Mao, the ‘people’s war’ was a strategy whereby Maoist insurgents could use attrition and unconventional warfare to defeat much more powerful conventional armies.”

FBI Director Christopher Wray recently said, “…[W]e are looking carefully at the prospect of foreign influence or foreign interference in all the protest activities [that have] occurred over the last few weeks.” If they really don’t have that data, let them call Trevor Loudon and consult his KeyWiki online encyclopedia on the left.

If the CIA can’t document the connections of these groups to China, fire the CIA bureaucrat running the agency, Gina Haspel. Trump’s new Director of National Intelligence, John Ratcliffe, must clean house at the CIA and come clean on what China is doing, politically and through the provision of weapons.

On Independence Day, we are being greeted with cries of “Happy 4th of July.” But despite the fireworks, it’s not a happy day. Republican Senators James Lankford and Ron Johnson proposed that Columbus Day be replaced by a new federal holiday of “Juneteenth.” (They have since backed away from this proposal.) Such a move promises more division, with blacks having their own Independence Day and whites keeping the traditional July 4th. The revolutionary mobs, of course, will not be satisfied, as demands for trillions of dollars in “reparations” will be advanced. A white backlash seems inevitable. That’s why responsible leaders must step forward now, before more damage is done and the situation is irreversible.

Is it too much to ask that “conservative” senators act to conserve the nation?

Trump stands virtually alone, it would seem, as he determines how to proceed, as the enemies of America assemble an arsenal, as we saw in the confiscation of weapons parts in Louisville, that actually includes armaments. These are dangerous times.

Attorney General William Barr, in an interview with Maria Bartiromo of Fox, discussed in detail how the Chinese are targeting our high-tech industries and stealing technology. He talks about restoring law and order, but is he truly unaware of Chinese political connections to subversive groups behind the riots?

Trump needs our backing, but he must get the people in place who understand and want to defeat the enemy. For his part, Trump has to refocus his campaign and start identifying the enemy by name. We deserve the truth.