Rand Paul on the fatal conceits of COVID-19 central planning 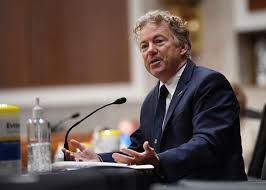 Rand Paul on the fatal conceits of COVID-19 central planning

When the first wave of COVID-19 hit the United States, Americans were generally sympathetic to the various lockdowns. Yes, we were likely to endure significant economic pain, but given how little we knew about the virus and how great the risks could be, we were willing to accept the cost.

Now, after months of mismanaged responses, contradictory analyses, and flip-flopping guidance from our esteemed sources, trust in our leaders and institutions is wearing thin. Despite all that we have learned, pundits and policymakers are struggling to reckon with the full complexity of things, opting instead for a predictable, generic reliance on worst-case scenarios.

This is perhaps most evident in the battle to reopen our schools. Rather than grappling with the evidence and weighing a wide range of trade-offs, such debates are more typically defined by overly confident soothsaying focused on a narrow set of risks and interests.

In a recent exchange between Sen. Rand Paul, R-Ky., and Dr. Anthony Fauci, Paul calls our attention to these blind spots, noting that — before getting into the nitty-gritty of choosing a policy — we must accept some basic humility about what we can and cannot know, or as Frédéric Bastiat might put it, what is seen and unseen.

Drawing from economist Friedrich von Hayek, Paul argues that “it is a fatal conceit to believe any one person or small group of people has the knowledge necessary to direct an economy or dictate public health behavior.” He noted that central planners “can never fully grasp the millions of individual interactions occurring simultaneously in the marketplace.” He continued:

The fatal conceit is the concept that central planning, with decision-making concentrated in a few hands, can never fully grasp the millions of individual interactions occurring simultaneously in the marketplace … I think government health experts during this pandemic need to show caution in their prognostications. It’s important to realize that if society meekly submits to an expert and that expert is wrong, a great deal of harm may occur when we allow one man’s policy, or one group of small men and women, to be foisted on an entire nation.

Take, for example, government experts who continue to call for schools and day care to stay closed or that recommend restrictions that make it impossible for a school to function … For a time, there may not have been enough information about coronavirus in children, but now there is. There are examples from all across the United States and around the world that show that young children rarely spread the virus … Central planners have enough knowledge somehow to tell a nation of some 330 million people what they can and can’t do.

Regardless of our thoughts and opinions in the midst of last spring’s school shutdown, we now have plenty of new information about its actual effects.

According to nationwide studies, students may have likely gained just 70% of a normal year’s comprehension in reading and just 50% in math. In the Boston public schools, only half of students showed up for classes each day, with one in five failing to ever log in. The pain has been particularly pronounced for the most vulnerable, with many families lacking the means to access online learning. According to Robin Lake at the Center for Reinventing Public Education, “elementary students [in urban districts] may have lost 30% of their reading skills.”

Further, as Paul aptly summarizes, research increasingly shows that the virus presents few risks to children. The CDC recently found that the flu presents greater risks of hospitalization and death, and another study concluded that “children under the age of 20 were half as likely to contract the coronavirus.” Such findings are consistent across the world, including the UK Iceland, Australia, and Norway.

Then there are the results in schools and daycares. According to NPR, during last spring’s lockdowns, the YMCA had no more than one reported case at any given site, although it “cared for up to 40,000 children between the ages of 1 and 14 at 1,100 separate sites.” In “a separate, unscientific survey of child care centers, Brown University economist Emily Oster found that … among 916 centers serving more than 20,000 children, just over 1% of staff and 0.16% of children were confirmed infected with the coronavirus.” These results also hold across various other countries.

Taking all of this into account, the American Academy of Pediatrics concluded that “all policy considerations for the coming school year should start with a goal of having students physically present in school.” The organization reminded policymakers that “COVID-19 policies are intended to mitigate, not eliminate, risk” and that “no single action or set of actions will completely eliminate the risk of SARS-CoV-2 transmission.”

But while such evidence certainly casts doubt on the legitimacy of last spring’s experiment, it does not mean we have all the answers, or that all schools ought to re-open in every place and all at the same time. If anything, it expands the number of values and risks we ought to be weighing and wrestling with as we continue to reevaluate our policies and tactics.

Which brings us back to Paul’s statement. Whatever conclusion we come to, we should eschew one-size-fits-all, one-side-knows-all solutions. Perhaps more importantly, we should restrain ourselves from outsourcing decision-making. As economist Thomas Sowell routinely reminds us, “The most basic question is not what is best, but who shall decide what is best.”

On this, Hayek reminds us that decentralization is far better mechanism for deciphering and digesting large sets of complex information. He wrote in his book, The Fatal Conceit:

The curious task of economics is to demonstrate to men how little they really know about what they imagine they can design. To the naive mind that can conceive of order only as the product of deliberate arrangement, it may seem absurd that in complex conditions order, and adaptation to the unknown, can be achieved more effectively by decentralizing decisions and that a division of authority will actually extend the possibility of overall order. Yet that decentralization actually leads to more information being taken into account.

Whether our eyes are focused on returning kids to school or stimulating renewed economic growth, such humility will be essential. If we hope to weather this storm and preserve public health, we need more diversity in approach and action, not less.

“Hayek had it right,” Paul concludes. “Only decentralized power and decision-making, based on millions of individualized decisions, can arrive on what risks and behaviors each individual should choose. That’s what America was founded on, not a herd with a couple people in Washington all telling us what to do, and we like sheep blindly follow.”

JOSEPH SUNDE is an associate editor and writer for the Acton Institute. His work has appeared in venues such as The Federalist, First Things, The Christian Post, The Stream, Intellectual Takeout, Foundation for Economic Education, Patheos, LifeSiteNews, The City, Charisma News, The Green Room, Juicy Ecumenism, Ethika Politika, Made to Flourish, and the Center for Faith and Work. Joseph resides in Minneapolis, Minnesota with his wife and four children.