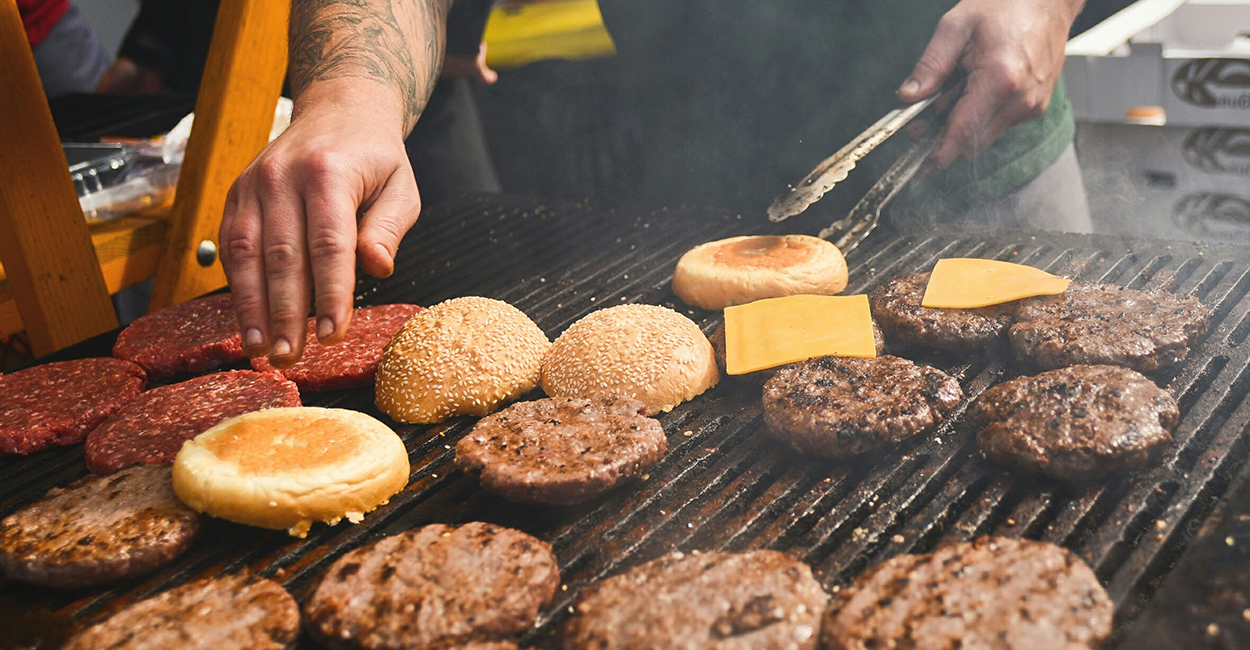 A man grills hamburgers. Some experts are calling for reforms to the country’s meat-inspection regulation system. (Photo: Anze Buh/EyeEm/Getty Images)

America experienced meat shortages at some grocery stores this spring due to the COVID-19 pandemic. Experts say reforms are needed to the meat-inspection process that could help prevent similar shortages in the future.

Jayson Lusk, professor and head of the agricultural economics department at Purdue University, explained at a recent Heritage Foundation webinar, “The Meat Supply During the Pandemic and Beyond,” that poorly crafted regulation has created unnecessary barriers to market entry for small slaughterhouses and processing plants.

Overregulation has led to fewer processing facilities, which results in many farmers and ranchers having to transport their livestock and poultry further to be slaughtered, he said.

It’s important that “we don’t have laws and regulations preventing entry of new competition and entrepreneurship in this space,” Lusk said.

Two regimes are fighting an ideological war in America today. But what side are you on? And how can you sharpen up on how to defend your position? Learn more now >>

In the late 1960s, Congress passed the Wholesome Meat Act, which gave the U.S. Department of Agriculture (USDA) the authority to heavily regulate the meat industry. The act requires that “any meat offered for sale in this country must be inspected,” said Baylen Linnekin, a lawyer who serves on the board of the Farm-to-Consumer Legal Defense Fund and author of “Biting the Hands That Feed Us.”

Before meat can be sold across state lines, it must be inspected at a USDA inspection facility. That means that a USDA certified inspector must be “on site any day that animals are being slaughtered [or] meat is being processed,” said Linnekin, whose book is subtitled “How Fewer, Smarter Laws Would Make Our Food System More Sustainable.”

Despite state inspection plants having to meet the stringent requirements of the Department of Agriculture, the meat still cannot be sold across state lines.

Meat can also be processed at custom slaughterhouses that are also required to follow health and safety guidelines, but that meat is for personal consumption only and cannot be sold to others.

If a farmer or rancher wants to sell meat across state lines or even internationally, he is required to travel to a federally inspected facility, which could be hundreds of miles away, creating a financial burden on the farmer and undue stress on the animals themselves.

“People have been complaining about the Wholesome Meat Act for a while,” Linnekin said. “In fact, there were complaints as early as 1968, when the law passed, that it was going to cause massive consolidation in the industry, and sure enough, we are down, I think, something like 7,000 processing facilities and plants since that time.”

One of the central issues that has arisen during the COVID-19 pandemic is that large, federally inspected processing plants often involve thousands of employees, the majority of whom work closely together. For these large facilities, “it is super hard to be profitable if you are not running at close to full capacity,” Linnekin said.

Such large plants cost a great deal to build and are expensive to maintain due to necessary building refrigeration and expensive machinery. If more processing facilities were able to enter the market, cattle and livestock could be sent to other facilities to be processed if a plant needed to close for a time due to a pandemic or any other problem.

Two different congressional bills have been proposed that would provide more opportunities for entrepreneurs and cut red tape so state-inspected meat could be sold legally around the country, and would even allow for the sale of meat processed at custom slaughterhouses.

The Processing Revival and Intrastate Meat Exemption (PRIME) Act “would allow meat to be sold intrastate—in other words, inside state borders—that has not been inspected, or that has been inspected but is processed at a custom slaughterhouse,” Linnekin said.

“There is also the New Markets for State-Inspected Meat and Poultry Act,” he added. “That would allow interstate … commerce when it comes to meat that has been inspected.”

Again, about half the states in America only operate state-inspection facilities, so this bill would allow farmers in those states the option to sell their meat across state lines and potentially turn a larger profit.

For those who might be concerned that repealing the Wholesome Meat Act would lead to meat being processed unsafely, Purdue’s Lusk said that would be unlikely, due to companies’ concern for brand reputation.

“When you invest money in advertising your brand and promoting your product, you have a really strong incentive” to ensure that you maintain customers’ trust, Lusk said.

Lusk and Linnekin made clear that there’s no easy fix to the meat-supply and processing industry problems, but it’s evident that changes need to be made if future shortages are to be avoided, and to enable new competition to enter the market.

“In the short term, opening up new markets through the PRIME Act or the New Markets Act would certainly benefit farmers and consumers, ranchers, by just creating new channels, new streams of commerce,” Linnekin said. “And that is going to have a lasting benefit, too, because it’s going to allow farmers to plan to purchase more cattle, to raise more cattle, and that is going to create a much more resilient food system.”

These are trying times in our nation’s history. Two regimes are fighting an ideological war in America today, with polar opposite viewpoints on public policy and the government’s role in our lives.

Our friends at The Heritage Foundation asked world-class speaker, educator, and researcher David Azerrad to walk you through his research and outline the differences between the “two regimes” in our society today—conservatism and progressivism—and their primary differences.

When you get access to this course today, you’ll learn key takeaways like what it means to be a conservative, what “modern progressivism” is, how a conservative worldview differs from a progressive one, and much, much more.

You will come away from this online course with a better understanding of the differing points of view, how they align with your principles, and how to defend your beliefs.