Washington State Patrol will no longer allow I-5 protests 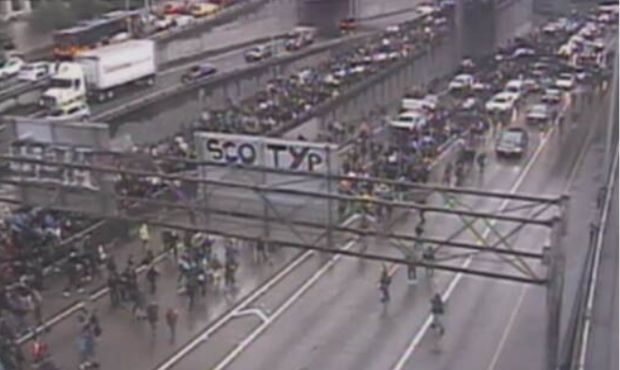 Protesters block I-5 in at Marion Street in downtown Seattle on May 30. (WSDOT Traffic Twitter image)

Washington State Patrol will no longer allow I-5 protests

The Washington State Patrol says it will no longer allow protesters to enter I-5. WSP says it’ll arrest pedestrians who walk onto the freeway.

The change was announced via Twitter just hours before a woman, 24-year-old Summer Taylor, who was hit by a driver on I-5 in Seattle early Saturday morning died of her injuries at Harborview Medical Center. A second woman who was hit remains in serious condition in intensive care. The driver, identified as Dawit Kelete, has been arrested. State troopers did not know whether it was a targeted attack.

Trooper Rick Johnson told KIRO Radio’s Chris Sullivan on June 18 that closing I-5 is all about keeping protesters safe.

“We’re there to support their First Amendment to march and say what you need to say, but on the freeway with cars it’s just not a good thing,” Johnson said.

A week later, State Patrol’s Chris Loftis told Sullivan closing the freeway might actually get protesters to move along faster than if troopers were to react.

“We’ve seen a match lit,” the State Patrol’s Chris Loftis said. “When the match is lit and the fire is burning, you have to think through what is the best thing to do right now, in this moment, to keep people as safe as they possibly can.”

He added that he doesn’t believe WSP surrendered I-5, but reacted appropriately to a unique situation.

On June 27, Washington State Chief John R. Batiste issued a statement both acknowledging both the frustration from drivers traveling through downtown Seattle and the safety of protesters.

“But due to the extreme volatility of the current environment, the impact of the pandemic on our court and jail systems, and our iron-clad commitment to use force only when it is necessary, reasonable, and proportionate to the situation, we are limited in our safe and appropriate response options,” Batiste said in a news release.