Some Idahoans could face up to six months in jail, $1,000 fine for not wearing mask

Some Idahoans could face up to six months in jail, $1,000 fine for not wearing mask

Idahoans who refuse to don facemasks in Moscow, Idaho, could face misdemeanor charges under a new order signed by the mayor on Tuesday.

Moscow Mayor Bill Lambert signed a mandate that requires every person within city limits to wear a mask in outdoor and indoor settings. Lambert’s order also mandates that all people within city limits follow social distancing procedures, which means staying 6 feet away from non-household members “whenever possible.”

The mask order exempts kids under 5 years of age, and allows people seated at a restaurant to take off their masks while dining. The order also allows people in city limits to go without masks when necessary to verify someone’s identity, obtain a service, or communicate with someone who is deaf or hard of hearing.

The order goes into effect on July 2 and stays in place for a week. The order may be extended by the city council.

Those who violate the mandate could face a misdemeanor charge, which would mean up to a $1,000 fine or six months in jail for someone found guilty.

It’s unclear how the city plans to enforce the order.

An official with the Moscow Police Department told the Idaho Freedom Foundation that the agency’s leadership team will meet Wednesday afternoon to discuss potential enforcement options. The official said the department will likely try to educate the public before issuing misdemeanor charges.

Read the full order below: 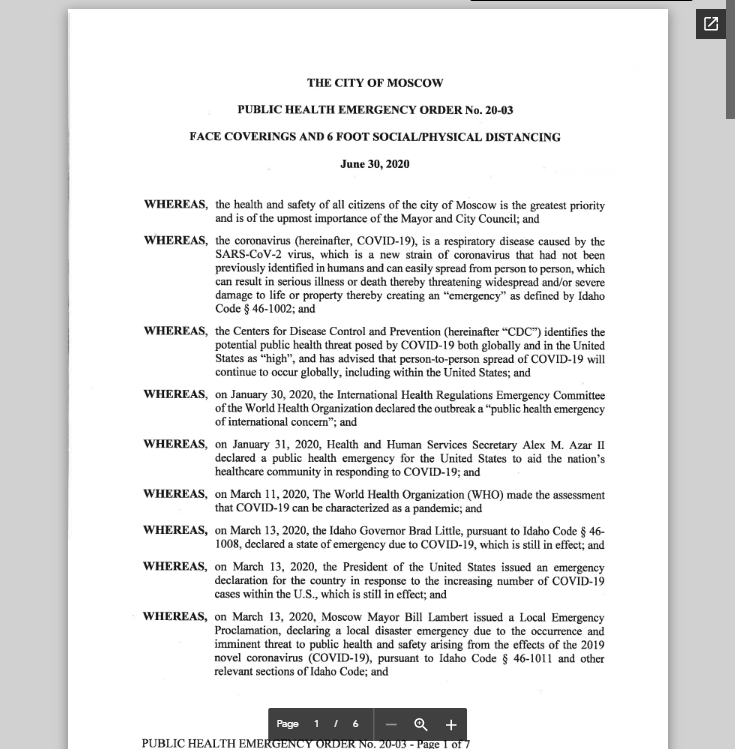