Democrats Exposed as the Racists They’ve Always Been

Democrats Exposed as the Racists They’ve Always Been

They say that out of every bad thing comes a good thing. Ask any mother who has been through a 20-hour labor!

The same can be said of the criminal behavior of the Marxist-inspired radicals––Antifa and Black Lives Matters––which eclipsed the legitimate outrage that followed the horrific murder of George Floyd by a white policeman, Derek Chauvin, in Minneapolis, MN.

This crime called for reform of the Minneapolis Police Department, which had ignored 18 grievances against Chauvin. But that is not what happened.

Instead, the peaceful protests against this savage act were obliterated by the professionally orchestrated, bountifully financed rampage of the above-mentioned anarchists-cum-terrorists through American cities and suburbs, leaving a massive swath of destruction that included dozens of black-owned businesses and dozens of white-owned businesses that employed black citizens. So much for Black Lives Matter!

What a beautiful tribute to George Floyd––God spare all of us such a memoriam!

1)However, the good that came out of this disgraceful, destructive, criminal behavior was the willingness of many black conservative commentators and writers to tell the American public what Democrats and their leftist media lackeys have been concealing from the public for decades.

2)Since the 1960s, the welfare system rewarded single black mothers with lifetime financial support which resulted in every generation for the last 60 years with fatherless homes—in short, the destruction of the black family. When the mothers worked outside the home to make ends meet, their children were left to the streets to admire the rich pimps, drug pushers and other criminals who became their role models….a doomsday scenario for every child.

3)Public schools run by Democrat-controlled unions and benefits-infatuated teachers and administrators allowed generations of illiterate students to “graduate” without the knowledge or skills necessary to be productive members of society. Just mention the name Eva Moskowitz to any leftist and you will be assaulted with vile language and the deep hatred Democrats feel toward the woman who runs upward of 25 Charter Schools in New York City, schools attended by children from black ghettos who pass the Regents with flying colors, score high marks on the SATs, graduate from high school and go on to top-flight colleges (without the “benefit” of Affirmative Action). This is tragically unlike the children who attend public schools and go on to survive either through lives of crime or welfare dependency.

4)The result: a disproportionate number of blacks––mostly men––in prison, representing a complete waste of potentially vibrant and contributory lives.

5)And the women? Most Planned Parenthood facilities are located in minority neighborhoods… on purpose! In fact, 25 percent of abortions performed each year are on black women. The founder of these baby-destroying factories, Margaret Sanger, as John Nolte reports, was an impassioned eugenicist  who spoke before Ku Klux Klan groups. On December 10, 1939, in a letter to Dr. Clarence Gamble of the Eugenics Society––in the context of discussing the Negro Project, which she developed in concert with white birth-control reformers––Sanger wrote: “We do not want word to get out that we want to exterminate the Negro population…” The Planned Parenthood Federation of America aborted 345,672 babies during the 2018 fiscal year, which equals approximately 86,500 dead black babies. So much for Black Lives Matter!

Democrats conceived of and implemented Sanctuary Cities which flout federal immigration law in protecting illegal aliens from deportation and prosecution. These laws go further in providing cradle-to-grave benefits like taxpayer-funded free food, free housing, free medical care, free schooling, and of course welfare payments. The result, of course, is that the states who subscribe to this communist philosophy are both crime-ridden and bankrupt. The cost is in the multibillions of dollars, which could and should have been spent on better schools, jobs and living conditions for black citizens, but never is and never was. So much for Black Lives Matter!

John Nolte asks what the following cities have in common:

1)They’re all run by Democrats, many for generations.

2)They’ve all been looted and burned by left-wing Antifa terrorists and other Marxist groups over the past few weeks.

3)These riots are wholly owned, supported, indeed applauded by the Democrat Party.

Here is but one example: 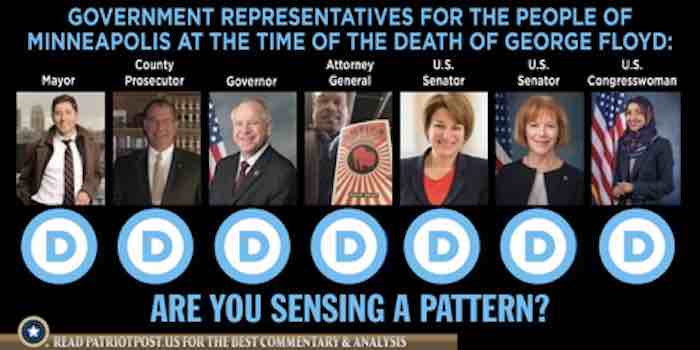 Make no mistake: all of the above actions were taken with one overriding goal in mind: to accumulate votes for Democrat candidates. The strategy was obviously to keep minority populations dumb and dependent, the better to convince them that hope for a better future lay right around the corner.

If you go to horrible schools, you’re not going to keep up on politics and you are going to listen to sermon-spouting “reverends”––like Al Sharpton and Jesse Jackson and Jeremiah Wright, et al––who tell you what to think and who to vote for, while they are making millions and their gullible acolytes are barely getting by. So much for Black Lives Matter!

But now that President Trump enacted the unprecedented prison-reform First Step Act, and created an economy in which black people have enjoyed the highest employment rate in American history––money in their pockets, unlimited opportunity, increased awareness of the slave mentality of the Democrats––which political party will this minority population vote for?

As I said, good comes out of bad. A black vote of 20 percent, and quite possibly 30 percent for President Trump, will teach the Democrats that even their most cherished “value”––abortion––is not enough to keep the black population loyal to their historically empty promises and innate racism.

Joan Swirsky is an award winning author and journalist. Her work can be found at joanswirsky.com