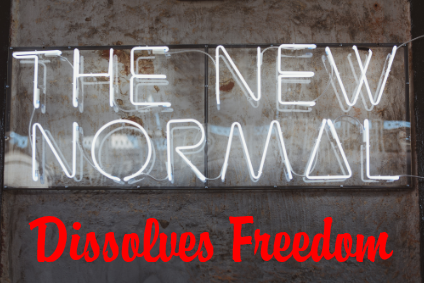 If you follow the press a term keeps coming up, The New Normal.  What are they talking about?

With the coronavirus and the requirements put on us by the various governors at first they were quite burdensome, but after awhile you learned to bear it and go on with life.  As long as you had food on the table and gasoline in the car what more did you need?

Whenever you go to a foreign country you have to adjust to how they do things.   Go live in the jungle with natives who live in grass huts and you have to make a lot of adjustments.  So what would be wrong with a new normal if that is what the government thought we needed?

First of all, the “government” has not done a very good job of convincing everyone that we had a true emergency which required drastic measures.  But if we have to go on living with masks and social separation, at least we are able to go on so why should we object?

My objection is very simple: All that has happened over the past few months has simply given more power to the government.  This is power that is hard to defend based on our Constitution and the principles of our founding.

People come here from all over the world because we have a successful economy and a stable political system.  Many of them come from places with deep poverty or where things seem to be in a constant state of civil war.

Go back to our founding and one key element stands out, Freedom; the freedom to make our own decisions about our personal lives, and a desire for a very small, though successful, government.  This was so important that several states refused to sign the Constitution until they were promised some protection from the Central or Federal Government, and thus the Bill of Rights, the first Ten Amendments.

The Great Depression and The New Deal of Franklin Delano Roosevelt saw the beginning of many programs that are still with us today.  This includes Social Security and Medicare, one reason our local hospital is the largest employer in the County.

The next big jump was The Great Society under Lyndon Baines Johnson.  The drug war, Equal Rights and Americans With Disabilities about then.

We have seen great changes in education; A Nation At Risk, Goals 2000, No Child Left Behind, Race to the Top, and Common Core.  The beginning of the Department of Education brought the Federal Government into every classroom.

This included even health care with each change adding to the size of the government.

Our President has allowed himself to be influenced by a few medical doctors without consulting the vast pool of medical people available to him.  While large groups of medical doctors are calling for complete re-opening of America it has not happened.  Over and over again we are just counseled to accept the “fact” of a “New Norma.”  Life will go on, they say, but life will be a little different.

How about the movement to eliminate the local police?  Give it a little thought and you will see that the local police are the most practical of all.  They are controlled by local governments.  One man dies under police protection and we just naturally assume he was actually killed by the police, when the autopsy did not show any evidence of asphyxiation or suffocation, and he was on some heavy drugs, with a long rap sheet.  Does that make any difference to those who are demonstrating to eliminate local police?  But, a national police force would be like the KGB and other such who work against the rights of the people.

Now we have The Green New Deal, based on The New Deal of FDR.  We are told that unless we do certain things that the world can only last twelve years (now ten and a half).  Look at the things on the list; they all mean more government.

We are told that solar and wind are the energy of the future, but right now they account for less than 5% of our energy.  They both require another energy source for when it is dark or the wind does not blow, coal, nuclear or natural gas.  Frankly we will never reach the place where we are 100% wind and solar because batteries are very impractical.  Sometimes we have rain for weeks here in Idaho and it would be very impractical to build a battery that large, and also require covering the landscape with solar panels and wind turbines.  No one wants to talk about it, but it is totally impractical. Even electric cars, which are okay for short trips in the city, but that is their limit.  Those who own them sometimes trade them for something more practical.

And the Democrats: Every candidate running for President as a Democrat is a socialist at heart.  What they have planned would change the whole way we live, at least until we discovered that we could not live that way.  Civilization depends on energy, and America became the greatest civilization both in the world, and in time because of our use of natural energy; fossil fuels (oil, coal) and nuclear.  The Democrats are working hard to eliminate the use of all of these fuels.

So, what does all this have to do with The New Normal?  It is quite simple, actually.  We will never get rid of face masks (in California they are now requiring a face mask any time you are outside) or separation, or shields in the markets.  These will never go away no matter when this epidemic ends.  We get used to these things; at first they are an inconvenience, but later they are just a New Normal, something we just learn to live with.  Ultimately they lead us to become more socialist as a country, a system that has never worked.

So what can we do?  Simple.  We can support men and women who believe in the normal, not The New Normal.  People who believe government has no business telling us how to live on a long term basis.  People who understand this is a Republic, not a Democracy and who support the Bill of Rights.  We talk about Liberty, but are we determined to live with the freedoms that God has given to us?

People come to America because they want to be free.  Does our freedom mean enough to us that we will stand against the programs that would eliminate our freedoms?  The end result is up to you.

For more information, or comments: jimhollingsworth@frontier.com 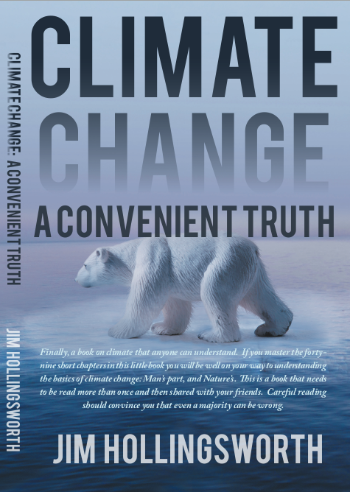 See:  ‘Climate Change: A Convenient Truth’ – A Short and Simple Book for School Kids – A book by Jim Hollingsworth